Posted in: Disc Reviews by Michael Durr on December 16th, 2022 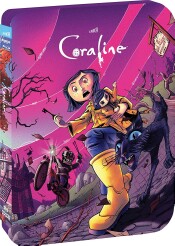 LAIKA Films has produced some amazing movies which have elevated the wonderful world of stop motion animation.  Paranorman, Boxtrolls, Kubo and the Two Strings, and Missing Link (all underappreciated by mainstream movie audiences).  But one movie stands above those fine films and is the one for LAIKA that started it all.  Coraline.  Today, I received the Steelbook edition (along with Paranorman) in brilliant 4K.  I can hardly contain myself.  Let’s take a look.

As the credits start to roll, we see a doll being undressed as well as un-stitched.  Then that doll is filled up with sand and re-stitched.  A couple of buttons are carefully selected and hair is sewn-in.  It is finally thrust into the world.  Hey, that kinda looked like Coraline, who we will meet shortly.

We are at the Pink Palace Apartments.  It’s moving day.  And the movers are not getting a particularly good tip.  Coraline Jones (voiced by Dakota Fanning) steps out to admire the outside.  As she walks around, a cat follows.  The cat meows and Coraline gets spooked and runs. She decides to look for an old well by using a dowsing rod.  All of a sudden a scary creature on a bike that is dressed like a skeleton comes after Coraline.

As it turns out, this isn’t a scary creature; it’s just Wybie Lovat (voiced by Robert Bailey Jr.) who has come to bug young Coraline.  Coraline gives it back verbally to Wybie, and all of a sudden the boy hears his grandmother calling after him.  He leaves, but not before telling the girl that her dowsing rod is actually a branch of poison oak.  Well, that’s going to itch later.  Coraline is able to find the well and looks through the hole between the board and wherever the bottom of the well may be.

Later, Coraline is itching up a storm on her hand and arm.  She receives a gift from Wybie wrapped in old newspaper, and it’s a curious doll that looks just like Coraline.  The girl does not like to be inside and starts to annoy her parents.  Her parents ask her to take inventory of the house.  By inventory, they mean count the doors, anything that’s blue, and whatever else tickles Coraline’s fancy.

Coraline goes over the house in exquisite detail.  She counts creepy bugs and leaky windows.  The girl finds a water heater (and accidental power switch) but perhaps the most interesting thing of all is a small locked door that’s been closed off.  Coraline gets her mother to unlock the door, only to find that there is a brick wall behind it.  Frustrated, she decides to go to sleep.  Then in the middle of the night, a rat scurries through the bedroom and to the small door.  However, that door is no longer bricked off behind it.  It’s open, and inviting Coraline to find out where it goes.

That whole new world, so to speak, is where our story really picks up.  From the get-go, the fantastic “Other World” is full of beautiful colors and creepy characters.  It becomes quite the suspenseful and dare I say a little bit of a horror tale that draws us in until the final climatic conclusion.  The animation is so painstakingly intricate and detailed, and the voice acting is top-notch.  The story works so well because of the abundance of interesting characters.  It is one of those rare movies where every single character is worth watching.

If I had to find fault anywhere, it would probably be in the creep factor.  I desperately would like to show this to my seven year old son.  But my son is also highly impressionable and will repeat just about everything in a movie.  I’m not sure my amazing wife would appreciate my son referring to his “other mother”, if you catch my drift.  This is a minor nitpick at the marketing for the movie, because the story and animation are top-notch.

This movie is filmed in a 1.85:1 aspect widescreen format.  The disc supports HDR and Dolby Vision.  It is running about 85mpbs, and is nicely on a BD-100 disc.  It is also native 4K and not an upconvert.  I am always hoping for an instant wow factor when I get a 4K disc after only watching a Blu-ray or sometimes a DVD for so many years.  I certainly got it here.  The intricacies of every button, a slight imperfection of a facial feature, and all of those details in the background of every single shot are amazing to behold.

It’s things like dirt next to a license plate that are now clearly visible where they weren’t necessarily before that are just crazy.  Yes, the stop motion animation lends itself to fine details that you wouldn’t expect with traditional animated films, but it’s all so amazing to see in the 4K format.  If I had one little nitpick (there I go again); sometimes the shots of just the outside of the house(s) seem to be a little soft.  It’s ridiculously minor, and I’m grasping at straws for this top-notch video transfer.

The sound to this film is presented in English Dolby ATMOS (French and Spanish 5.1 are also available) with English SDH, French and Spanish subtitles.  There is also a 5.1 English DVS track as well.  The sound has been upgraded quite a bit, and it shines in all of the right places.  Dialog is crystal clear, and there is no problem distinguishing the various odd characters, many of whom will be on the screen at the same time.

Surround effects are more prevalent with the upgrade to seven speakers.  That door creaks a little harder, that kettle on the stove boils with more crackle, and even a croaking frog all seem to get enhancements.  (Did I just use creak, crackle, and croak all in the same sentence?)  Anyway, I can’t forget the music, as you can set that sucker to eleven and be enveloped in the element of this twisted universe.

Note: All Extras are on the Blu-Ray disc.  The only exception to this rule is that the commentary appears on both the UHD and Blu-Ray discs.

Audio Commentary with Director Henry Selick and Composer Bruno Coulais: A pretty good commentary as Henry goes well in-depth with this movie and how the minute he read Neil Gaiman‘s story, he knew he wanted to make it into a feature-length film.  A very worthwhile listen and will open your mind as to how much effort went into making this such a fantastic movie.

Inside Laika – Discovering the Characters of Coraline Featuring Rare Test Footage 10:45:   We start off the features here with learning a lot about the painstaking approach to stop motion animation.  After all, these folks are essentially actors, just with puppets.  We get some information on the voice acting as well.  But the most fascinating part is how they did so many darn rats on the screen at once in the relevant scenes.

Inside Laika – Revisiting the Puppets w/ Laika’s Animation Team 8:40: Split into seven parts for seven different characters such as Coraline, The Other Parents, Mr. Bobinsky, and more.  Basically they show the puppet they worked with and all the points of articulation.  Works of art for sure.

Feature Length Storyboards 1:34:02: If you want to see Coraline with a whole bunch of storyboards and other drawings, well, then this feature is for you.  Naturally it’s probably best that this is watched after a few viewings.

Making of Coraline 36:14: This is split into about ten sections and covers a ton of topics including Evolution of the Story, Character Design, Voice Acting, Making Puppets, Coraline’s Closet, that Fantastic Garden, Special Effects, and more.  Very complete, but a bit on the rapid-fire side.  Wish they would have spent more time on a few of these items.

Creepy Coraline 5:03:  This short feature takes on all of the creepy crawly things in the movie and how they designed them.

Voicing the Characters 10:47:  The voiceover sessions are always my favorite featurettes.  This one is no exception, as the actors certainly seem to be getting into it and are excited about their parts.  I really forgot how strikingly beautiful Teri Hatcher was (and probably still is) during this period.  A few choice bits from Keith David here, too, who was wonderful as the Cat.  What’s probably most interesting is that Jennifer Saunders (who voiced Miss April Sprink) and Dawn French (who voiced Miss Miriam Forcible) actually switched roles early into production.

Deleted Scenes 8:44: Six scenes here with introductions by Henry Selick.  Lots of fun scenes, and most of it was already animated.  But as Henry mentioned, for pacing reasons mostly they were removed.

Still Galleries 6:18:  Split into three sections of 25 pictures each, we get Character Art, Concept Art, and finally Behind the Scenes.  Lots of fun items to go through and will auto-play as needed.

Trailer  2:25:  Finally, we get the trailer to round out the extras.  This will probably come in a bit loud; just be forewarned. 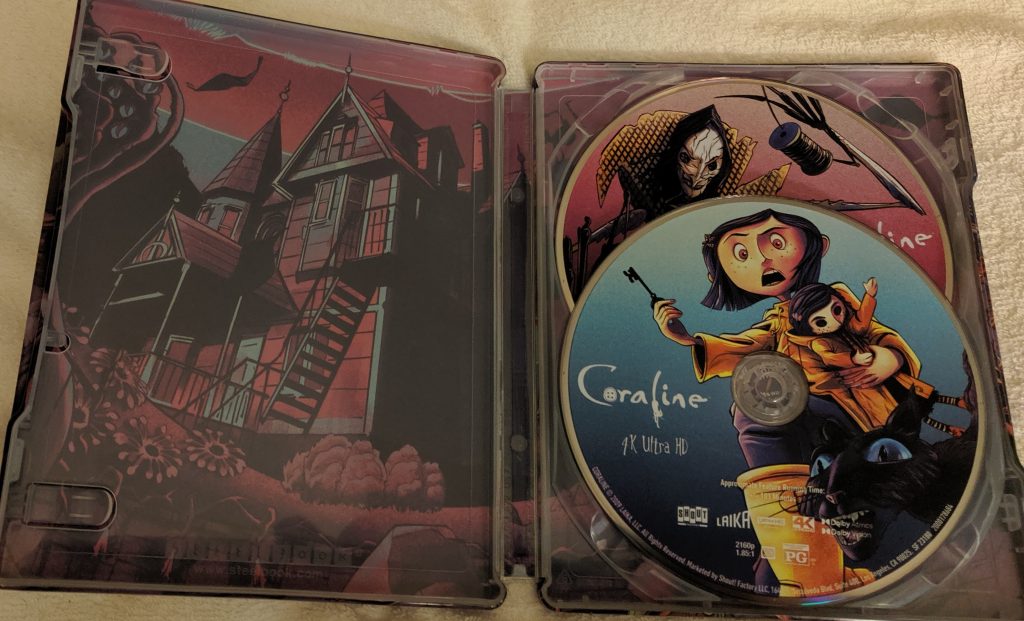 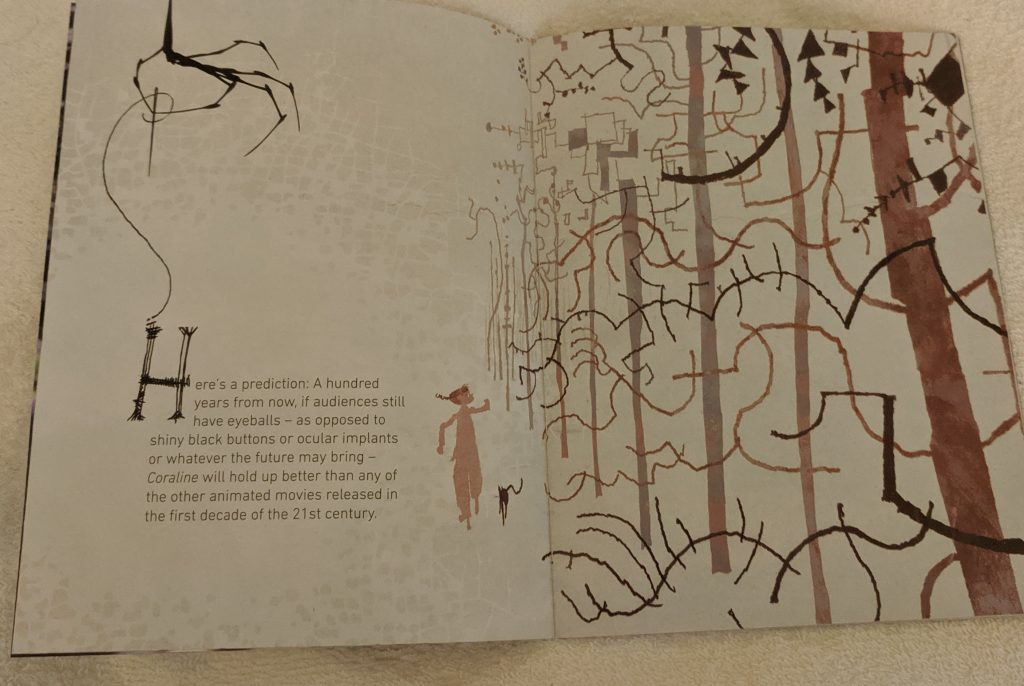 Take a look at the top animated movies of 2009.  Coraline, Christmas Carol (Jim Carrey version), Up, Princess and the Frog, Cloudy with a Chance of Meatballs, 9, Monsters vs Aliens, and yet another Ice Age film among others.  What films in that list do you honestly think will stand the test of time?  It sure the heck isn’t Up or Cloudy, Monsters vs Aliens or another Ice Age.  I’ll accept Christmas Carol because it is one of the better renditions of that classic tale and you know what, 9 is a darn good film.  But the one that stands above all of those films twenty years from now will be Coraline.  It’s story, look, music, and just flat out appeal will keep you coming back to this film when you need something a little different but desperately want to be entertained.

Shout Factory has given us a wonderful 4K treatment with outstanding video, audio, a meaty extras package, and housed that in a wonderful steelbook edition. (Thank you to Shout Factory for this fantastic set.)  The only thing that you could realistically says it’s missing is 3D (but that’s widely available, quite honestly).  A giant recommendation here, and not just because I love animation and anything that comes from Laika (I can’t wait for Paranorman, Boxtrolls or Kubo and the Two Strings), but because I love film.  Meaning that Coraline is for film lovers, and you’ll appreciate it again and again with this package.  Enjoy.

Michael Durr has been reviewing movies for the better part of fifteen years now. He primarily enjoys thrillers, sci-fi, animation and even a little courtroom drama. His favorite films include Escape from New York, the Goonies and anything with Alyssa Milano. When he’s not praising Kurt Russell as the greatest actor of our time or scratching his head over a David Lynch flick, he’s spending time at home in Texas with his lovely wife, Lori and his amazing son. How they put up with him is a mystery, but even Basil Rathbone doesn’t have the time to solve that one.
Holiday Gift Guide Spotlight: Kino Studio Classics UHD/4K Releases Avatar: The Way of Water