Posted in: Disc Reviews by Gino Sassani on January 24th, 2023 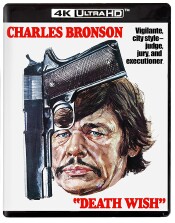 “What about the old American social custom of self-defense? If the police don’t defend us, maybe we should do it ourselves.”

Vigilante justice has always been a popular subject in our movies, television shows, literature, and even comic books. Batman is nothing more than Bruce Wayne out to get back at criminals like the ones who murdered his parents when he was a kid. Batman is the ultimate vigilante. And let’s be honest. Haven’t you ever once fantasized that you could cross that line and punish some injustice or another that crossed your path? The subject has been around since stories have been told. There are those landmark tales, however, that for some reason or another reach the soul of the masses. For good or evil? You can decide that for yourself. But one of those iconic vigilante films has to be the original Death Wish with Charles Bronson. There’s some extra visceral element that isn’t in so many of the imitators, remakes, or even sequels. The film has its own storied origin tale and long history of roadblocks before it ever hit box office gold in 1974.

“What do you call people who when faced with a condition of fear do nothing about it. They run and hide”

Paul Kersey (Bronson) has just arrived back in New York from a wonderful tropical vacation with his wife Joanna (Lange) and married daughter Carol (Tolan). He’s an architectural engineer, and he’s getting briefed on a problem project out in Arizona he may have to go out and personally see to. What he doesn’t know is that three thugs, one of whom is Jeff Goldblume in his very first role, have followed his wife and daughter home. They break in and beat Joanne to death and rape daughter Carol, leaving her in a permanent catatonic state. Of course, there’s little that the cops can do, and he must live with his grief. He plays the good little employee and goes out to Arizona leaving his daughter’s care with her husband, Jack (Keats). There he meets Ames Jainchill, played by the wonderful character actor Stuart Margolin. Margolin takes him to his gun club where he invites Paul to shoot. Turns out he’s already pretty good. His father taught him to be a hunter. Paul returns to New York having satisfied the hard-to-satisfy Jainchill, saving the big project and toting a gift from Jainchill: A sweet handgun and ammo.

Paul starts taking evening strolls in the unsafe city, and it doesn’t take long before he runs into some bad guys. He guns them down and rather casually walks away. Before long he’s taking regular midnight excursions and taking out a little more of the city’s trash with each trip. The papers start to spread word of a vigilante out there, and it makes the cops nervous. It falls to Detective Frank Ochoa, played by Vincent Gardenia,  to track him down. He’s a good cop, and through a series of clever deductions and research is led to Paul Kersey. But just as he’s about to take him down, he gets word from the top that they don’t want him arrested, merely given the get-out-of-town-by-sundown treatment to avoid a polarizing trial in the city.

It took a long time for the film to find a studio and crew. There was concern that the film might glorify the idea of a vigilante, and there was concern of a copycat, which did end up happening. The most famous of these incidents inspired by the film was the actions of Bernie Gates, who shot some thugs in the subway who had approached him “asking” for some money. Gates would allude that the film might have inspired his actions. It was a huge media storm, and Gates ended up running a store for decades called Vigilante Electronics. But fear of the message wasn’t the only thing standing in the film’s way.

The movie was attached to Sidney Lumet, who was going to have Jack Lemmon star as Paul Kersey and Henry Fonda as the cop who is on his trail. The film spent long enough in development that Lumet went on to film Serpico with Al Pacino instead. Both Lemmon and Fonda both left the project when Lumet left. The trick was trying to find a star who looked meek and mild so his turn would be somewhat a surprise. The case could have been made that as soon as you saw it was Bronson, you knew it was going to be bad news for the bad guys. But that’s looking at the film with too much of what we already know today. Bronson wasn’t quite as well known yet and hadn’t taken this kind of a role before. Sure, he would star in four sequels and more than a few copycat movies, but Bronson could have just as much been that Clark Kent kind of guy in 1974.

The film also benefits from an eclectic score by none other than Herbie Hancock, who uses wonderful percussion at times, then the funk slap of bass and still gives you those emotional swells with more traditional orchestrations. Hancock captures that gritty street just as much as the film’s cinematography.

Death Wish is presented in its original aspect ratio of 1.85:1. The ultra-high-definition image presentation is arrived at with an HEVC codec at an average of 70-75 mbps. The film was shot on 35mm, so it is native 4K.  What I love most about this image presentation is how much it retains the period atmosphere of that 1970’s film stock along with enough grain that we still have that beautifully organic feel to everything. There’s a little bit of soft focus to wide shots, but you get some nice detail and clarity in those close-ups. The grittiness remains. Black levels are pretty good, which is important because so many crucial scenes happen at night in low-lit areas. I mean, where else can you hunt for low-lifes than low lighting? The addition of HDR gives just that little extra push for the contrast, and while this isn’t much of a colorful film, you get glimpses of color in the few daytime exteriors, particularly while the action takes place in Hawaii and Arizona. The print is quite clear with no artifacts, scratches, or score lines. A huge upgrade from anything that has come before.

The DTS-HD 2 channel mono also comes with a wider 5.1 option. I listened to that version. It doesn’t get aggressive and spoil the original intent. Surrounds are merely there to add a bit of depth to the audio presentation. Better subs offer a little more of a dynamic range, all without taking the upgrade too far. Dialog comes through, and it’s not like the action shots are big firefights. They’re short and to the point. No need to shake the room here.

The lone new extra is found on the Blu-ray copy and is an interview with actor John Herzfeld, who plays one of the thugs Kersey takes out.

The film remains a classic. Not only was Bronson perfect for the part, but the cinematography employed by director Michael Winner was perfect for the film. It’s gritty and shows us those places in New York we hadn’t really been to before. His style easily compares to that of Martin Scorsese’s Taxi Driver or Lumet’s Serpico. It’s not quite the great film those might be, but it comes from the same school of street cinematography. An entire era of the 1970’s was very much immortalized by these three films. Death Wish doesn’t have the kind of storytelling the other films have, to be sure. The plot’s about as basic as they come, and the more they tried to build more plot elements for the sequels, the less impactful the idea would become. They say a picture is worth 1000 words. Then I propose a moving picture is worth 10,000 words. There’s no need for any bells and whistles here; bare bones tells quite a story. The remake captures none of that. The truth is, “We’re just not pioneers anymore.”

Gino Sassani is a member of the Southeastern Film Critic's Association (SEFCA). He is a film and television critic based in Tampa, Florida. He's also the Senior Editor here at Upcomingdiscs. Gino started reviewing films in the early 1990's as a segment of his local television show Focus. He's an award-winning recording artist for Omega Records. Gino is currently working on his 8th album Merchants & Mercenaries. Gino took over Upcomingdiscs Dec 1, 2008. He works out of a home theater he calls The Reel World. Favorite films: The Godfather, The Godfather Part II, The Body Snatcher (Val Lewton film with Karloff and Lugosi, not the pod people film), Unforgiven, Gladiator, The Lion King, Jaws, Son Of Frankenstein, The Good, The Bad And The Ugly, and Monsters, Inc.
No Mercy (Blu-ray) Programmed to Kill (Blu-ray)