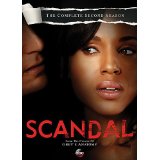 “You’d be surprised what powerful people can get away with behind closed doors.”

Viewers experiencing cop/lawyer/doctor show fatigue might be happy to learn the hottest job on TV these days appears to be “fixer.” Of course, the sneaky appeal of shows centered on these professional problem solvers is that they actually combine elements of cop and lawyer dramas; the fun twist is that the fixer’s job often requires them to prevent crimes from being solved. Before Ray Donovan became a hit for Showtime this summer, the second season of Scandal transformed the nighttime soap into ABC’s buzziest drama.

Olivia Pope (Kerry Washington) is the head of her own crisis management firm and is widely regarded as the best fixer in Washington, D.C. So what exactly does a fixer do? I’ll let Olivia explain: “I don’t perform miracles or the impossible. I make cold calculations about difficult situations, and I do not take on anything I know I won’t win.” Olivia is flanked by her team of devoted “gladiators in suits.” There’s smooth lawyer Harrison Wright (Columbus Short), intense investigator Abby Whelan (Darby Stanchfield), haunted techie/former CIA operative Huck (Guillermo Diaz) and enigmatic new hire Quinn Perkins (Katie Lowes). Olivia’s firm often clashes with well-meaning, comically overmatched Assistant U.S. Attorney David Rosen (Joshua Malina).

Before establishing Pope & Associates, Olivia was a major reason President Fitzgerald “Fitz” Grant (Tony Goldwyn) was elected to office. She subsequently worked as the White House Director of Communications and, oh yeah, carried on a torrid affair with the president, much to the chagrin of long-suffering Chief of Staff Cyrus Beene (Jeff Perry) and ambitious First Lady Mellie Grant (Bellamy Young). At the end of the first season, Fitz was ready to walk away from the presidency because of an impending sex scandal and live a “normal” life with Olivia, his true love. However, Cyrus, Mellie and (even) Olivia conspired to keep Fitz in the Oval Office — where this supposedly great man belongs — at great personal cost.

Season 2 picks up with a miserable Fitz being cut off from Olivia as a pregnant Mellie and a determined Cyrus work toward getting the president a second term. Meanwhile, Olivia fights to save Quinn’s life as the rest of the team learns about her shadowy past. The reasons behind Quinn’s arrival at the firm reveal a major conspiracy that plays out throughout the season and has a seismic impact on both Olivia and Fitz’s relationship, as well as the presidency itself.

Scandal is created by Shonda Rhimes, and the show appears ready to follow in the lofty footsteps of her previous smash, Grey’s Anatomy. Like Grey’s, Scandal had an abbreviated first season — seven episodes for Scandal; nine for Grey’s — before breaking out in a big way with a larger episode order in season 2.

While the show demonstrated potential during its brief first season, I wasn’t sure it would be able to maintain its breakneck narrative momentum. After all, it’s much easier to make an exciting seven-episode season than it is to keep things interesting for 22 episodes. For that reason, I was consistently blown away by the propulsive storytelling and genuinely surprising twists in the second season of Scandal. That sort of relentlessly juicy content helps compensate for the show’s overly aggressive visual style that involves the overuse of still photographs, camera clicking noises, and unnecessary shots of the actors filmed through a prism. There’s also the random use of classic R&B songs like “Brick House” and “Car Wash” in almost every episode, which is fine except for the fact that they don’t usually relate to what’s happening on screen.

The first eight episodes, in particular, are terrific entertainment. The Ep. 7-8/“Defiance”-“Happy Birthday, Mr. President” double whammy is particularly strong. (The latter episode features the now-famous “I belong to you” speeches.) Inevitably, the last third of the season becomes a bit muddled with the sort of business — involving a mole in the highest reaches of the U.S. government — that already felt tired when 24 was nearing the end of its original run. Fortunately, that stretch of episodes also includes the season’s finest hour (the heartbreaking, Huck-centric Ep. 19/“Seven Fifty-Two”) and a final line of the season that literally made me yell, “What?!”

The heart and heat of the show comes from the Olivia/Fitz relationship, which is interesting because producers didn’t originally know how big of a role Fitz would play in Scandal. If there’s one area where Rhimes excels, it’s in writing steamy scenes that can quicken viewers’ pulses, even within the constraints of network television. There’s obviously a “forbidden romance” element to their relationship, and Washington and Goldwyn have scorching chemistry whenever they’re near each other and can’t touch. (Or even when they’re just talking on the phone.) On the other hand, the way these two (otherwise) levelheaded adults can’t keep their hands off each other sometimes comes off as juvenile and eye-rollingly silly. Such is the price of showing viewers what uninhibited passion looks like. And since this is a Shonda Rhimes show, be sure to keep an eye open for some additional hookups among this cast of characters.

Washington earned an Emmy nomination for playing Olivia this season. Whether Olivia is berating a power player on behalf of a client or melting in a vulnerable puddle of goo in front of Fitz, Washington is equally good. Her toughness as an actress helps ground some of the more melodramatic moments on the show. When you add in the fact that Washington always looks incredible, you’ve got the recipe for a star-making performance. Goldwyn, meanwhile, has created an intriguing, imperfect president, even if his mopiness can get a bit annoying. (Buck up, man! You’re the leader of the free world!)

The rest of the members of Olivia’s team sort of blend into one blindly loyal blur, but Diaz’s excellent work this season (particularly in Ep. 6/“Spies Like Us” and the excellent “Seven Fifty-Two”) deserves special mention. On the other hand, Short’s Harrison simply appeared to pick up a lot of the traits left behind by Henry Ian Cusick’s Stephen Finch. (The former Lost actor exited the show between seasons 1 and 2. Whoops!) Also, you could practically feel the writers not really knowing what to do with Quinn before successfully making her a dark understudy for Huck.

For that reason, I actually preferred the supporting players in the White House. Perry is wonderful as Cyrus, who will do anything to keep Fitz in the White House and always appears to be on the verge of a coronary. The scenes with his journalist husband James (Emmy nominee Dan Bucatinsky) are consistently funny and surprisingly affecting. Heck, I even admire the way Bellamy Young’s opportunistic, infuriating Mellie isn’t painted as a complete monster; after all, Mellie made professional and personal sacrifices for Fitz’s career. (On top of that, this is one of the few instances where the wife is painted as “the other woman.”) Young and Malina, as the firm’s likable frenemy, became series regulars in season 2. Meanwhile, season 2 guest star Scott Foley (Felicity) is set to become a series regular in the upcoming third season.

The season 2 DVD set of Scandal includes all 22 episodes on five discs. Special features (all of which appear on Disc 5) include a gag reel, deleted scenes, a few minutes of material added to the season finale/“White Hat’s Back On”, and two featurettes, including one that takes a closer look at “Seven Fifty-Two.”

The sophomore season of Scandal saw Olivia’s trusty gut betray her repeatedly, and our white-hatted heroine lost her way. Conversely, the show itself — flawed, but intensely watchable and addictive — found its footing and hit its stride. The season 2 finale was the show’s highest-rated episode ever, and I’d be shocked if the season 3 premiere on Oct. 3 doesn’t exceed that number. If ABC wondered how it would turn this promising drama into its next breakout hit, there’s nothing to worry about now: “it’s handled.”

Sons of Anarchy: Season Five (Blu-ray) Kiss of the Damned