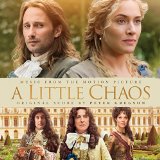 “Are you a believer in order?”

The natural order of things during the summer movie season is to be pummeled by one would-be blockbuster after another, each aiming to be louder and more extravagant than the last. So debuting A Little Chaos — a 2014 British period drama about a seemingly esoteric chapter of French faux-history — amidst all this noise is a curious decision. While the film certainly nails the “extravagant” part and largely adheres to costume drama conventions, there’s just enough here to make it a thoroughly pleasing alternative to the typical multiplex fare.

“There is an outdoor ballroom in the gardens of Versailles. In what follows, that much at least is true.”

With that cheeky opening title card — a funhouse distortion of the standard “Based on a true story” — A Little Chaos immediately makes it clear that it will use history as a dramatic jumping-off point rather than a road map. This is also the type of movie about French characters where all the actors use vaguely British accents; so I suppose the cast of A Little Chaos has a leg up, since most of the performers here are actually British.

In real life, Andre Le Notre was a famous landscape architect and King Louis XIV’s principal gardener, responsible for designing the meticulously beautiful park of the Palace of Versailles. A Little Chaos begins in 1682, with the king (Alan Rickman) already having tasked Le Notre (Matthias Schoenaerts) with a project for the gardens at Versailles. The movie’s major historical invention is Sabine de Barra (Kate Winslet), a modest woman with bracingly unconventional ideas about gardening. After a rocky job interview with Le Notre, Sabine is nonetheless hired to lead the construction of an outdoor ballroom in the middle of the woods. The presence of such a seemingly plain woman turns heads at Versailles, with members of the king’s court looking at her with genuine curiosity…and Le Notre’s status-obsessed wife Francoise (Helen McCrory) regarding her with utter disdain.

A Little Chaos is the second film directed by Rickman (after 1997’s The Winter Guest), and the actor brings the same refined, reptilian charm to the director’s chair that he does to his performance as the king. (The real-life Louis XIV ruled for more than 72 years, making his reign the longest of any monarch among major European countries. Rickman’s wearily playful performance makes even more sense in that context.) The opulence is here in both the eye-catching costumes and production design, but Rickman and cinematographer Ellen Kuras — whose credits include offbeat Michel Gondry films like Eternal Sunshine of the Spotless Mind and Be Kind Rewind — sneak in just enough visual wit and slightly askew compositional choices to make this stand out from the way a period drama usually looks.

It also mirrors the way Sabine’s off-kilter choices rock Versailles and jolt Le Notre awake from his personal and professional funk. I actually wish Rickman and co-writers Jeremy Brock and Alison Deegan had devoted a little more time to showing precisely what was so radical about Sabine’s aesthetic, beyond moving a potted plant at the Versailles gardens a few inches to one side just before her job interview. Then again, the film sort of “yada-yadas” the construction of the garden itself in favor of the sort of social commentary that is familiar to anyone who is proficient in “Jane Austen.”

For example, instead of being bothered by the fact that her husband is clearly falling for Sabine, the hissable Madame Le Notre — McCrory deliciously sinks her fangs into this villainous, condescending character — is more annoyed that he’s apparently chosen a “builder” as his mistress. And instead of presenting everyone in the king’s court as a superficial bobblehead, there’s a late sequence in which Sabine and some of the purportedly higher class ladies bond over a shared sense of loss. (A Little Chaos periodically hints at an undercooked bit of personal trauma in Sabine’s past.)

“In the end, we have only our instincts. And although the elements may treat us cruelly, patience, care, and a little warmth from the sun are our best hope.”

Winslet co-starred with Rickman in Sense and Sensibility, not coincidentally based on an Austen novel, and the duo share a pair of low-key lovely scenes. (The second of which produces the quote above, which is especially effective if you know Louis XIV was known as “The Sun King.”) Winslet is a relatable, sturdy presence as Sabine. The character (a plain woman among royals) is sort of an inverse of her most famous role (an aristocrat among commoners), but Winslet conveys the same sense that she’s someone unafraid of getting her hands dirty. (The actress was pregnant throughout the filming of A Little Chaos.) Schoenaerts and his sad eyes make for a decent romantic lead, especially after Sabine reawakens Le Notre’s passion. Even though the film eventually veers into unabashedly romantic territory, I found him most amusing when he was deadpan and demanding about his work.

But if we’re talking “amusing”, then we have to discuss Stanley Tucci’s scene-stealing role as Philippe, the king’s flamboyant brother. (The movie doesn’t make a big deal about the historical figure’s near-certain homosexuality beyond having him steal glances and some hand-holding from a male companion.) Although Rickman’s wry performance is plenty fun, the film really pops to life whenever Tucci shows up on screen.

It’s worth re-iterating that Rickman has essentially made a 117-minute movie about…gardening. That’s a hard sell these days (or any day!), even if you’re open to the idea that gardening was widely considered a laudable artform in the 17th century. (I mean, is there even such a thing as a “famous landscape architect” today who could achieve the level of celebrity Le Notre did?) It’s tempting to think that plopping this relatively arcane flick among the big boys of 2015 is the act of Chaos, but this film only deviates from the costume drama norm A Little. Fortunately, Rickman has stacked his movie with enough visual wit and strong performances (including his own) to keep us invested and entertained.