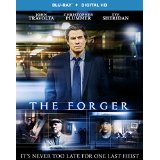 It honestly took me a while to get over the opening shot of The Forger. The shot itself is rather unremarkable: it’s a simple close-up of star John Travolta sitting in a small room by himself and staring straight ahead. But between his ridiculously obvious wig and the waxy texture of his face — the actor now looks like he’s wearing a Michael Myers-style “John Travolta” mask — I knew it was going to be pretty difficult to take him seriously, no matter who or what was playing. It’s a shame because there’s actually a pretty decent family drama to be found within The Forger.

Turns out Travolta is playing Ray Cutter, a Boston-based, world-class art forger who has 10 months remaining on a five-year prison sentence. With the light at the end of the tunnel in sight, Ray suddenly decides 10 months is too long to wait, so he makes a deal with local crime boss Keegan (Anson Mount) to pay off a judge and get out of prison early. In exchange, Keegan forces Ray to forge Claude Monet’s “Woman with a Parasol”, steal the real thing from a local museum, and replace it with the forgery. So why would Ray indebt himself to a volatile mobster instead of merely serving out the rest of his sentence?

Well Ray’s 15-year-old son Will (Tye Sheridan) has been living with his crotchety grandfather Joseph (Christopher Plummer) while Ray has been in prison. Will also has inoperable brain cancer and doesn’t have much time to live, which explains Ray’s urgency to spend time with him. Not surprisingly, the pair has a rocky relationship, so Ray agrees to grant Will three wishes. One of them involves reconnecting with his estranged mom (Jennifer Ehle), while another…involves precisely the kind of thing you’d expect a 15-year-old boy to ask for before he dies. And since Ray simultaneously has to prepare to pull off the Monet heist, Will decides he might also want to get involved in the family business.

Welcome Back, Kotter premiered in 1975, which means that Travolta has officially been mega-famous for 40 years. So even if his face here didn’t look like a cake wreck, it would be pretty hard to separate the superstar from the role, especially when Travolta tries to play a “regular” person. (That’s probably part of the reason his Going Clear co-star Tom Cruise has gravitated toward sci-fi roles in recent years.) However, it also means we’re familiar with details about Travolta’s personal life, like the fact that his son Jett — who dealt with seizures through his life — tragically died at age 16. As a result, it’s easy to see why The Forger, directed by Philip Martin and with a script credited to Richard D’Ovidio, appealed to the actor.

It’s also no coincidence the father-son moments are by far the best parts of the film. The scenes between Travolta (turning in his most pleasingly understated work in years) and Sheridan (an impressive young actor who’s more than held his own opposite Matthew McConaughey in Mud and Nicolas Cage in Joe) crackle with low-key warmth. You can even extend that compliment to the scenes between Ray and Joseph, a petty criminal himself. It’s not hard to see the Bad Dad gene being passed from Joseph to Ray, but the movie solidly conveys the notion that there has always been love and affection there, even if it was drowned out by bad decisions.

Plummer gives Joseph a rascally charm and a sing-songy Irish brogue that unfortunately brings me to the other cringeworthy part about Travolta’s performance: his spotty Boston accent. (Or rather “Bawston” accent.) It’s so bad that even Travolta doesn’t seem to believe in it; he frequently abandons it in the middle of a scene only to randomly revisit it. The accent is especially galling when Ray goes into a semi deep dive about Monet and the painting he is trying to re-create.

In fact, the whole heist aspect of The Forger feels tossed-off. There’s not really any sort of explanation as to how blue collar Ray became a painter good enough to apparently replicate any master. Also, the climactic heist feels rushed and pretty clumsy, especially when you consider all the work Ray put into replicating the Monet. At least Mount (Hell on Wheels), rocking a spectacularly greasy mane himself, brings some charismatic menace to his handful of scenes as Keegan. Meanwhile, Abigail Spencer (Rectify) also co-stars as an FBI agent tracking Ray’s movements in order to bust Keegan. Her scenes are largely and ultimately useless, but they kind of serve as a Greek chorus for the audience. (I enjoyed her partner pointing out all the different ways Ray violates his parole throughout the film.)

In the end, The Forger is two movies. Unfortunately, only one of them really works.

The Forger is presented in an aspect ratio of 2.40:1. The 1080p image is arrived at with an AVC MPEG-4 codec at an average of 22 mbps. Filming took place in Boston, and this Blu-ray from Lionsgate does a nice job of conveying the slight, desaturated chill of the Cutters’ working-class neighborhood, while also showcasing the sunnier, warmer parts of the city. Ray spends most of his time at the former, which means the video presentation doesn’t really have ample opportunity to shine. There are a lot of clean, but unspectacular interior scenes. Black levels are solid and offer nice separation. There is also a strong amount of fine detail on close-ups, especially during the sequences where we see Ray’s paint hit the canvas.

The DTS-HD Master Audio 5.1 track fares slightly better, even if you wouldn’t necessarily think of this as a showoff title. Rear speaker activity is vibrant and dynamic (dogs barking in the Cutter neighborhood, prisoners chatting in a crowded cafeteria). There is also well above-average placement within the surround sound field (the music coming from Will’s room on one side of the screen corresponds with the proper rear speaker), and dialogue is clear throughout. Subs are only noteworthy during the scene where Ray goes to see Keegan at a nightclub.

Identifying The Forger — Creating Character and Conflict: (7:22) A pretty standard featurette, where Travolta reiterates the notion that the Cutters are pretty amateurish. (They might not even crack Ocean’s Twenty). Cast and crew also discuss capturing the human-scale drama and filming in Boston. Presented in HD.

Ignore the slick-looking Blu-ray cover and the cheesy, painfully-generic tagline. (“It’s never too late for one last heist.”) You’ll enjoy The Forger more if you approach it as a generational family drama rather than a lame heist flick.