Posted in: Disc Reviews by Jeremy Butler on October 22nd, 2015 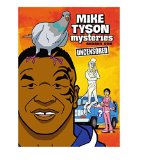 I really hope that Tyson is getting a hefty sum for this series. It is the only justification I can come up with for him being part of a series that does not cast his intelligence in the best light. A cross between Scooby and Family Guy in my opinion, Tyson leads a cast that includes his adopted Asian daughter, a ghost (and that’s not the weirdest member), and a talking pigeon as he travels around the world solving mysteries. Yes, you read correctly, mysteries. When it comes to needing a mystery solved, Tyson is not the first name to come to mind, but I suppose that was the point.

Based on what I gathered from the first episode, former heavyweight boxing champion Mike Tyson (voiced by the champ himself) forsakes the boxing gloves after being approached by a ghost who advises him to give up violence and dedicate himself to helping those in need. I cannot make this up. Tyson receives messages via carrier pigeons from citizens that need help solving mysteries. With the help of his adopted Asian daughter, the ghost, and an alcoholic pigeon who used to be a man but was cursed after cheating on his ex-wife who was also a witch, Tyson attempts (and I stress…he attempts) to help everyday citizens. I will allow a moment of silence to allow you to absorb everything I have just imparted to you.

Now one can only assume that the convoluted nature of the plot is meant to add humor to the animated series. However, as a whole the series is forgettable and only produces lighthearted chuckles rather than stomach-cramping laughter. A majority of the chuckles come from the interactions with the pigeon that is voiced by Norm MacDonald. The characters aren’t exactly original, with each seemingly drawing parallels from already established series such as Futurama, Family Guy, and a few other adult animated series. Once again I repeat, I imagine Tyson is receiving a hefty sum for his participation, because the only other explanation for his allowance of the way he is portrayed in the series is he has a great sense humor.

The storylines are another obvious attempt at humor, likely only funny if you are below a certain age requirement. If you are on the other side of 25 or your maturity is not on that side, you will probably not enjoy the experience. Can you guess what side I’m on? Now, if you fit into the age group, you may find enjoyment in watching Mike Tyson battling with supernatural and technological opponents all in the name of helping someone. Fair warning, most situations are resolve themselves and he his presence serves as comedic fodder. It is also worth noting that each episode is not a long experience. The credits usually rolled by the time I was beginning to grasp what was happening.

In conclusion, this series was intended for a clear age demographic. Individuals on the outside of that specific demographic should avoid it completely and save themselves the time. Although the entire experience is less than two hours, it is two hours you can’t get back.

Jeremy Butler is a film school graduate of the International Academy of Design and Technology. He is been writing for Upcomingdiscs since 2012; however, movies have played a big part of his life for much longer. Favorite genres include horror, science fiction/fantasy, and comedy. Favorite movies are V for Vendetta, Boondocks Saints, Kiss Kiss Bang Bang, and The Godfather.
4Got10 Rock the Kasbah