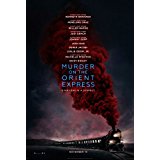 I have to start by talking about the mustache. You’ve probably already seen the outrageous facial hair Kenneth Branagh rocks as Hercules Poirot, the brilliant Belgian detective who appeared in 33 Agatha Christie novels (including 1934’s “Murder on the Orient Express”). But it is truly a sight to behold on the big screen! Up close, it looks like a fake, ridiculously twirly mustache has been layered on top of an even longer fake, ridiculously twirly mustache. I bring this up because the two things that truly separate this sumptuous, all-star take on Poirot’s most famous case from previous (and superior) adaptations are the film’s eye-popping production values and…well, Branagh’s mustache.

That’s actually where we catch up with Poirot (Branagh) in this new Murder on the Orient Express: the year is 1934 and the detective’s sleuthing has made him famous around the world. The film opens with Poirot solving a case in Jerusalem, and the prologue also establishes Poirot’s world-class fastidiousness as he searches for perfectly compatible boiled eggs for breakfast. But at this point in time, Poirot is weary of his fame and, more specifically, occupying the head space of killers in order to catch them. He is very much looking forward to a well-earned holiday when he gets word that a case in London demands his immediate attention. So it’s time to catch a train.

Even though the Orient Express is unexpectedly booked to capacity, Poirot’s friend Bouc (Tom Bateman) — who happens to be the famous train’s director — secures him a spot. The colorful cast of fellow passengers include a very shady businessman named Samuel Ratchett (Johnny Depp), who is traveling with his accountant (Josh Gad) and a valet (Derek Jacobi). Poirot also encounters a governess (Daisy Ridley) and an African-American doctor (Leslie Odom, Jr.) who seemed surprisingly familiar with each other prior to boarding the train. Addtionally, the Orient Express is transporting a husband-hunting widow (Michelle Pfeiffer), a pious missionary (Penelope Cruz), a Russian princess (Judi Dench) with a German maid (Olivia Colman), a hostile professor (Willem Dafoe), and others. After the train is temporarily derailed by an avalanche, a dead body is discovered. The victim was brutally stabbed to death 12 times.

In addition to starring as Poirot, Branagh directed this new take on Orient Express. Almost 45 minutes pass before the titular Murder takes place. We spend a decent amount of that time getting to know some of the major players, but the character that Branagh treats with the most care and loving detail is…the Orient Express! Besides the lavish production design — this movie made me wish that fancy train travel made a comeback — Branagh’s camera (via cinematographer Haris Zambarloukos) glides through and hovers above the proceedings. (Orient Express is one of two high-profile 2017 releases shot in 65mm film; the other is Christopher Nolan’s Dunkirk, which co-starred Branagh.) One of the low-key standout moments early on is the tracking shot where Poirot boards the train and has mundane interactions with practically every important character. The director also occasionally offers a detached, bird’s eye view of the investigation when Poirot goes into work mode.

Even though I feel the story has holes — if I’m the killer and I see that the world’s greatest detective boarded my train, I’m re-thinking my elaborate murder plot…and I’m certainly not goading Poirot — this is actually a pretty faithful adaptation of Christie’s novel. So anyone who is familiar with the material won’t be surprised by the movie’s resolution. The most significant change here is making the doctor a black man, which alters how other characters view him and adds a hint of danger to his connection with a fellow passenger. (It’s a relief that Odom’s casting hasn’t generated a whiff pre-release controversy…or that the filmmakers aren’t patting themselves on the back for their colorblind choice.)

Murder on the Orient Express has been adapted many times before. The most famous version is probably Sidney Lumet’s 1974 movie, which featured an even higher-wattage cast. While I’m sure the famous names are there for box office reasons, it also works story-wise since practically every passenger on the Orient Express is putting on a performance or tweaking their persona.

Branagh is obviously the leader of this cast, and he delivers Poirot’s wittier lines with aplomb. However, the mustache ends up doing too much of the heavy lifting and its sheer absurdity undermines him when things get serious. (And he certainly can’t hold a candle to David Suchet’s universally acclaimed take on the character, which included a small-screen version of Orient Express.)

Elsewhere, Depp seems to relish playing a scumbag…even though his character’s creepy mustache is a distant second to Branagh’s. While Branagh generously gives his fellow actors at least one moment to shine, the standouts here include a steely Ridley holding her own whenever governess gets grilled by Poirot, Odom bringing heart and poise to the conflicted doctor, and Pfeiffer alternately masking or revealing her movie star presence to solid effect.