Posted in: Disc Reviews by Gino Sassani on November 10th, 2017 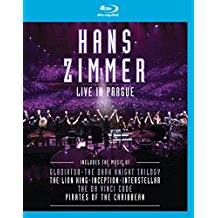 Hans Zimmer has composed the music for some of the most iconic films of the last 20 years. That list includes Gladiator, The Dark Knight Trilogy, Crimson Tide, Pirates Of The Caribbean, Dunkirk, and even some of The Lion King. He’s the go-to composer for directors like Ridley Scott and Christopher Nolan. His music is on par with household names like John Williams. I own a few scores that I’ve felt compelled enough to pick up over the years, and one of my favorites has been Gladiator for some time. When I heard that Eagle Rock Entertainment was going to release a Blu-ray containing a tour stop of this incredible music live, I was quick to sign up to review. Still, I had little idea what to expect. A veteran of many rock concerts since the 1970’s, I’ve never really watched or attended a concert dedicated to film scores before. Would it be more like going to the symphony to hear the likes of Bach or Mozart, or would it be something more akin to a progressive rock band with orchestral elements like ELO? The answer came down somewhere in between, and it turned out to be the most unique concert experience I’ve had the pleasure to review.

The concert begins more like a rock concert. Zimmer comes out, not to direct, but to play along with the other musicians. He ends up on piano, guitar, and a few other instruments before the show concludes. In the start the music is rather fast and furious. The stage is lined with an eclectic array of instruments played by a decidedly international collection of musicians. There are a couple of violins and an electric cello. But there are also several drum sets, electric bass, and a couple of electric guitars to round out the sound. And for the first few tracks taken from Driving Miss Daisy, Sherlock Holmes and Madagascar, the concert resembles a Jeff Lynne-assembled rock concert more than anything else. The band goes from one piece to another with nary a pause or introduction. In fact many tracks throughout the concert run together, and you might want to keep the track list (provided on a nice insert) handy to follow along. After this first high-energy performance, Zimmer finally stops to chat a moment with the audience. That’s when the back curtain is lifted, and we discover that there is a full orchestra tucked away behind the “band” along with an extensive choir. That’s when the concert moves into the more classical feel for such films as Thin Red Line, Angels And Demons, and, of course, selections from Gladiator. But there remains a bit of an edge to the music, provided by that front line of spotlighted musicians.

If you thought this was going to be some kind of background music experience, you will be pleasantly (I hope) surprised by how captivating the entire performance turns out to be. Zimmer finds places to spotlight most of the “band” musicians throughout the concert. Each has their solo or near-solo moments, and that’s how he introduces us to these primary players. After almost each mini-set of tracks, he points out a few of the players and tells us who they are. All the while the stage takes advantage of some of your typical rock concert trappings. There are stunning laser displays along with complicated lighting schemes that serve to enhance the music’s atmosphere and bring out the prominent musicians in the piece. There’s a large back screen that is used to project both light and laser effects as well as animated footage that might recall a certain theme. There are no clips from the films themselves. I suspect there would have been some rights and money issues to do that. But many do recall the films. A growing red line befits The Thin Red Line, while images of bats accompany some of The Dark Knight themes. Certainly some of the material is better than others. That will depend on your own personal favorite themes. I kind of checked out a bit toward the end when the music turned rather harsh and too edgy for my tastes. That lasted for about 20 minutes. At times like these you can tell that Zimmer is playing a bit the rock star decked out in an electric guitar that shrills forth its dissonant tones. It’s really the only part of the show I did not enjoy. For the most part there is plenty of great music here, and it’s clear that Zimmer has scoured the entire planet to get some of the best musicians you will ever see on one stage together. The front group contains his large core touring band, while the choir and orchestra were composed of members of the Czech National Symphony Orchestra & Choir. I suspect that this was true throughout the tour, with local orchestras and choirs integrated into his touring group.

The concert includes a new original piece written by the band to honor the people who were killed watching The Dark Knight in Aurora, Colorado. It’s called simply Aurora. It’s mostly an atmospheric piece played while Zimmer talks about the event.

Hans Zimmer Live In Prague is presented in its original aspect ratio of 1.78:1. The 1080p image is arrived at with an AVC MPEG-4 codec at an average 40 mbps. This high-definition image presentation takes you as close to the music as you can get. There are many extreme close-ups that allow you to really capture the technique and performance of these fine musicians. You’ll get close enough to see sweat dripping down their necks, and the clarity is actually pretty remarkable for coverage of a live event. The camera operators were obviously familiar with the music and who to focus on at just the right time. The clarity delivers the wonderful light effects with admirable sharpness and detail. The long shots might not have quite the resolution, but contrast allows for a great picture with solid black levels.

You have two choices that really is no choice at all. The Dolby Atmos track defaults into a dynamic 7.1 surround presentation. You can opt for a stereo PCM 2.0 option, but I can’t honestly understand why unless you’re using headsets. The Atmos option allows you to enjoy incredible separation that allows the instruments to push through and deliver the kind of clarity you likely would not have heard if you had been present at the show itself. The subs deliver the bass instruments with the kind of power that lets you feel as much as hear them. The choir particularly stands out when they are a part of the mix. The surround remains constant. There’s no “creative” messing around with the mix. Each sound field has its place, and it all works together to deliver what must have been an extraordinary job to pull off. I don’t know how many tracks we’re dealing with here, but clearly over 100. Yet each is mixed perfectly with the proper eq and f/x that allow each to cut through the whole nicely. The engineering crew on this effort deserves as much praise as the musicians.

I have known for years that Hans Zimmer was an exceptional composer. I did not realize that he also had this inner rock star persona that turns out to be quite the showman. But it’s not just that. His ability to find such talented people and assemble such a complex unit for a live tour is what’s really on stage here. Certainly, he had a lot of help but it all starts at the top. If you’re a fan of films. If you’re a fan of music this will be an enjoyable hour and twenty minutes. “And it doesn’t end just there”.

Gino Sassani is a member of the Southeastern Film Critic's Association (SEFCA). He is a film and television critic based in Tampa, Florida. He's also the Senior Editor here at Upcomingdiscs. Gino started reviewing films in the early 1990's as a segment of his local television show Focus. He's an award-winning recording artist for Omega Records. Gino is currently working on his 8th album Merchants & Mercenaries. Gino took over Upcomingdiscs Dec 1, 2008. He works out of a home theater he calls The Reel World. Favorite films: The Godfather, The Godfather Part II, The Body Snatcher (Val Lewton film with Karloff and Lugosi, not the pod people film), Unforgiven, Gladiator, The Lion King, Jaws, Son Of Frankenstein, The Good, The Bad And The Ugly, and Monsters, Inc.
The Limehouse Golem Murder on the Orient Express (2017)