Posted in: Disc Reviews by Archive Authors on July 17th, 2003

In 1927 Herbert Asbury published a book entitled The Gangs of New York: An informal history of the Underworld. This book would prove to be the inspiration for Martin Scorsese’s Gangs of New York. This film was originally supposed to start filming in the late 1970’s, and after numerous delays and many financial issues, the film finally came to fruition in 2002.

It is an epic film of staggering proportions about a little known part of the history of the United States and New York City. We follow a story filled with both real and fictional characters through the slums of the lower Manhattan’s Five Points. A young Irish immigrant played by Leonardo Dicaprio returns to the Five Points to seek revenge against the man who killed his father Bill Cutting played by Daniel Day Lewis.

Daniel Day Lewis proves that he is one of the best actors to grace the screen with his menacing portrayal of Bill the Butcher. We both loath and feel empathy for a man who struggles to find a place for himself in a fast changing world and his portrayal by Daniel Day Lewis is riveting. Cameron Diaz turns in an admiral performance as Jenny, a street hustler, and the love interest of Amsterdam (Dicaprio). Diaz does a good job, but she is just seems too exotic looking to really fit into the overall look of the film. Dicaprio also turns in an admiral performance as we watch him struggle with his feelings towards Bill as the father figure he so desperately wants and needs but he knows that the must kill. Amsterdam’s personal vendetta becomes part of the gang warfare that erupts at the same time as the draft riots that changed the face of politics in New York forever.

This is a very visual film with stunning sets and is well deserving of its exceptional 2.35:1 anamorphic transfer. The overall image is very sharp with deep blacks and shows off the dirty grimy feel of the Five Points slums, you can almost feel the grease in Bill’s hair. Colors tend to be somewhat muted and towards the warmer side of the palette with lots of rich brown and reds, when called for colors do leap off the screen as in the sashes of Bill’s Native Americans gang colors. The transfer is near perfect but suffers in a couple of scenes from slight edge enhancement and the second disc shows some slight bits of film grit. Overall thought this is an impressive looking film with a top notch transfer.

The audio like the video is very well done but suffers from a few slight flaws. We have both a Dolby Digital and DTS 5.1 audio track of similar qualities with the DTS track having slightly better bass and a little better sense of spaciousness. The rear channels are well employed for immersive crowd sound sounds and ambience for the wide open scenes in the square and at the docks. The front channels are wide and open with very good placement of off screen sounds, bass is full and powerful when called for. The problems come with slight issues of dialogue intelligibility in a couple of scenes. Other then that we have an amazing sounding film with an expansive soundscape that will test your systems ability to bring out the low level and ambient details of this soundtrack. Also included is a French two channel audio track.

We start things of with an interview with Dante Ferretti the set designer for the film and a look at the process for the production and design of the expansive sets used in this film. We also have an interactive walkthrough of the sets with Ferretti and Scorsese that allows us to take a 360 degree look at different parts of the some of the sets. Next is an interview with costume designer Sandy Powell. We also have a history guide to The Five Points and a study guide. Rounding out disc one are the teaser and theatrical trailers for the film.

Disc two contains a 40 minute Discovery channel special entitled Uncovering the real gangs of New York which helps to separate the fact from fiction in the story. We also have the video for the U2 song The Hands that Built America. Also included on both discs is a feature length commentary with Martin Scorsese that is both informative and entertaining, it is one of the best commentaries that I have listened to and is worth a look for the depth that it adds to the film. Menus are scored and animated and some of the best that I have seen.

This is a film that I thoroughly enjoyed and has made a home for itself as one of my top ten favorite films. The DVD package is well rounded out and the audio and video are of excellent quality. You owe it to yourself to check out this amazing film. 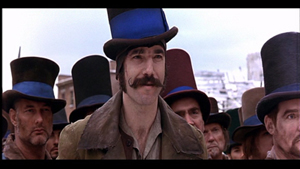 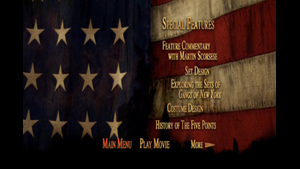 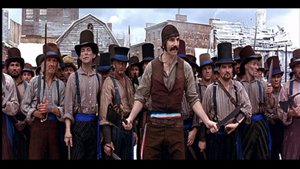 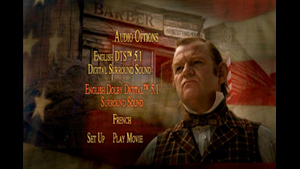 Vampires Blood on the Sun