Posted in: Disc Reviews by Archive Authors on April 10th, 2004 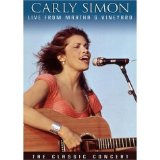 I hate Carly Simon. However, I feel that as I am supposed to be an impartial reviewer, so I should get that out of the way right here at the start. I have never liked her, though I am not really sure why. Maybe it is her freakishly large mouth. Maybe it’s that fact that “You’re So Vain” really is about the person who thinks it’s about them. Whatever the reason, I just can’t help it. She makes me cringe.

The good news is, now that I have viewed this disc, I have plenty of valid reasons to hate her. Ob…iously, I am not Simon’s target audience, but my job as a reviewer is to give my opinion, so that’s what I will do. This entire concert, filmed on the beach at Martha’s Vineyard in 1987, has all the earmarks of a Docker’s commercial. Pastel sweaters, frilly skirts and wine coolers abound in this ode to aging yuppies.

Originally filmed as an HBO special, this concert includes all your favorite Simon tunes. In fact, I will admit, I was surprised to discover how many of these songs that I knew… and how many of them were songs that I always detested, but never knew who sang them. Now I know who is to blame.

This is, hands down, the worst audio that I have ever heard on a music title. The soundtrack included on this disc is so bad that it could make even the best home theater sound like the stereo in a 1987 Oldsmobile Delta 88. The title was re-mastered from the original tapes to fit into the popular 5.1 format. Unfortunately, re-mastering in this case means that the original audio was spread out across the front of house. No other improvements were made, which is obvious once the disc is played.

The main problem with this soundtrack comes from the subwoofer. Typically, when I am pleased with a soundtrack, one of the major points that I make is that the producers didn’t forget to send plenty of signal to the subwoofer. Here, however, the majority of the signal heads down south. There are so many muddy and muffled tones coming from the sub, there is little room for anything else (save Simon’s shrill voice). If I were drowning while watching a concert, this is much like how I would imagine it would sound.

In this case, I wish I was.

Sadly, the video doesn’t exactly do its part to save this production. I stated earlier that this was a concert that was originally recorded for broadcast on HBO. After watching this disc, I am pretty sure that Simon taped the HBO broadcast on her Betamax machine, and that tape was the source master for this disc. In fact, I have many films on VHS that look better than this one. The full screen concert is filled with soft focus and softer colors. Details are simply not present, with anything more than 25 feet from the camera coming across as a blur. In a few instances, there is even some vertical scrolling going on.

I could go on, but this disc is so bad that it is not worth the effort. Take my word for it… the picture sucks hard-core.

There are a decent number of extras on this disc, but they really amount to nothing of real consequence. A bonus track is included, which is a performance from the second day of the two-show shoot. This track has all of the quality that you have come to expect from this disc. Carly’s Scrapbook is a collection of some of her personal photographs, set to music. The photos are taken from all eras of her career, and feature shots of Carly with a guitar, Carly with a dog, Carly with a dog and a guitar, and Carly by herself.

Also available is a discography, which is actually a text bio, written by a rabid fan of Simon’s career (or, more likely, by Simon herself). This piece might as well be titled, “Carly Simon is God, and Here’s Why…” Lastly, there is a interview section, featuring Simon talking today about the show, the shoot, and how wonderful she is. Throughout much of this extra, Simon talks down to the viewer, and is generally arrogant. This little habit is especially unflattering when she starts throwing out words that have virtually vanished from the English language (“bucolic”, anyone?) After sitting through this interview segment, I have decided that Carly Simon is the perfect mix of Barbara Streisand and Martha Stewart. That is a thought that gives me cold shivers.

By this point, it should be clear that I absolutely detest Carly Simon. That fact aside, this is a horrible DVD product. The picture is bad, and the audio is somehow worse. Even die-hard fans are going to be disappointed by the quality of this disc. Take this review as fair warning. There are hundreds of great concerts available on DVD. This one does not even come close.