Echoes From the White House 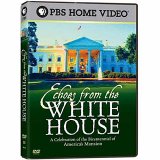 This PBS documentary on the White House was made in 2001 to coincide with the Bicentennial of the mansion’s construction. I’m a student of the presidency, so I can’t say that I learned anything new here. I do believe most folks will walk away with some renewed interest in one of the icons of American government. Many celebrities, including Sam Waterson, Avery Brooks, and Robert Prosky, read actual letters from presidents and first ladies dealing with the White House. The film makes generous use of period photographs and paintings to depict the various stages of the building’s development into the modern version we are so familiar with today.

Remember that this is a documentary. You’ll find a very simple Dolby Digital 2.0 track here that sounds pretty much like a 2 channel mono. Since dialogue is pretty much all that there is, with an occasional music cue, this track serves its purpose. I’d say you’ll find this pretty much broadcast quality.

Echoes From The White House is presented in its original broadcast 1.33:1 full frame format. The picture quality varies considerably. Older black and white footage is scratchy and often full of print artifacts. There is a heavy usage of stills that offer the expected single dimensional quality of that technique. The modern video of the actors reading from their letters is soft and very “videotape” in quality. Colors appear to run a bit. Again, you will find this to be very much in keeping with a low budget PBS documentary.

Nothing to report here.

The bottom line here depends very much on your own interest level in the material. There is nothing dramatic or stylish in the presentation. You have to go into this wanting to know the information being provided. This is strictly for historic value and does not provide a generous amount of entertainment. In the words of the White House’s first occupant, John Adams: “May none but honest and wise men ever rule under this roof.”

Gino Sassani is a member of the Southeastern Film Critic's Association (SEFCA). He is a film and television critic based in Tampa, Florida. He's also the Senior Editor here at Upcomingdiscs. Gino started reviewing films in the early 1990's as a segment of his local television show Focus. He's an award-winning recording artist for Omega Records. Gino is currently working on his 8th album Merchants & Mercenaries. Gino took over Upcomingdiscs Dec 1, 2008. He works out of a home theater he calls The Reel World. Favorite films: The Godfather, The Godfather Part II, The Body Snatcher (Val Lewton film with Karloff and Lugosi, not the pod people film), Unforgiven, Gladiator, The Lion King, Jaws, Son Of Frankenstein, The Good, The Bad And The Ugly, and Monsters, Inc.
Bring Me the Head of Alfredo Garcia Bob Dylan World Tours 1966-1974