Posted in: Disc Reviews by Michael Durr on October 21st, 2009

Most of us watch cop shows. The numbers indicate that the viewing public likes the CSI’s, Law & Orders, NYPD Blues, and even older shows like Hill Street Blues. Apparently about the only cop show we don’t like is Cop Rock (and even that show has been re-broadcast on other networks). So, naturally we get some cookie cutter cop shows that try to break the mold. Flashpoint is one such cop drama that focuses on the art of negotiation. Perhaps this one is interesting already.

Sergeant Gregory Parker (played by Enrico Colantoni) is the head of an elite tactical squad known as the Strategic Response Unit. They work in situations that normal police offers can not normally handle from bomb threats to hostage situations to criminals with an extreme amount of firepower. But the response of lethal force is a last resort as they try to use negotiation and alternative methods to bring the various situations back where they belong.

The Sergeant works with others in his elite squad. He serves as the lead negotiator and captain of the team. Ed Lane (played by Hugh Dillon) is the team’s lead sniper specialist and second-in-charge. He has deadly accuracy but finds home life difficult as he is more committed to his job. In his position, he also finds himself the target of internal investigations as they try to argue the use of lethal force.

Jules Callaghan (played by Amy Jo Johnson) is the second sniper who looks small but packs just as deadly a punch as Ed Lane. She’s very strict about her job ethic and strives to be taken as seriously as the men she works with. Then there is Sam Braddock (played by David Paetkau). He’s the new guy, he had been fighting in the Middle East but came back home. He’s an expert shot but his smart mouth tends to get him in trouble.

Now I know why I usually enjoy Canadian based shows. They usually have an interesting cast, they stray from the typical and put together a well drawn out show. Flashpoint is all of these things. It has a solid cast from head to toe and includes a good mix of character types without feeling that they have to satisfy some magical quota.

The stories are also well planned out. The first few episodes really establish the idea that most characters’ personalities are black or white. They are usually shades of grey and they vary given a certain situation. Sure, they might be holding a gun. But what exactly are their motivations for holding that gun? In one episode, it could be because a father believes that his daughter should get the next heart replacement.

Each episode is kinda like that, and in most situations the SRU (Strategic Response Unit) tries to find the non lethal solution to solving the problem. Sometimes they have to resort to the “solution”, but more often than not they come through to save the day. It’s refreshing to see a show so real but yet not delve into depressing overtones all the time like some others.

The video is in 1.78:1 anamorphic widescreen. It looks like any other typical cop show with a range of cast types and with them filming a good part of the show in Toronto, we get a lot of pretty shots. Color is well used and I like the way they use certain shots to make a point. Great presentation of video all around.

We get a Dolby Digital 5.1 English sound track (2.0 mix also included) for the show. Dialog is clear but a bit low. I had to turn it up a little more than usual. Surrounds are actually used for both talking and action scenarios but it is still very front heavy. I’m kinda surprised with the locale as it is that it didn’t include a French track or at least the subtitles.

Flashpoint gets it right. A fresh show involving an over-looked area of police work and makes it human. It isn’t just about being some whiz-bang shot and stopping the enemy cold. It’s solving the situation and having the best outcome for the parties involved. The best thing? It is touching but not overly depressing (I’m looking at you CSI: NY). The cast is solid and likeable especially with the main characters. The dvd is satisfactory as it brings to you all of the episodes and a very good video presentation. The audio is a little low and the extras are essentially throwaways but the show is up to par. Recommended for my fine Canadian friends and American ones too.

Scorpio
First in Line
Element of Surprise
Asking for Flowers 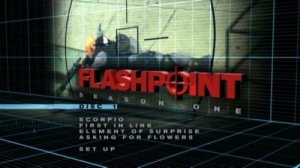 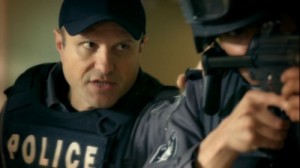 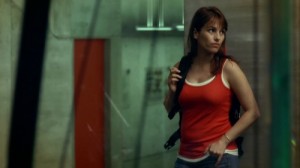 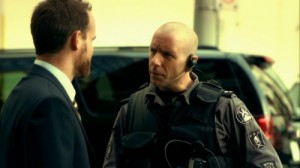 Michael Durr has been reviewing movies for the better part of fifteen years now. He primarily enjoys thrillers, sci-fi, animation and even a little courtroom drama. His favorite films include Escape from New York, the Goonies and anything with Alyssa Milano. When he’s not praising Kurt Russell as the greatest actor of our time or scratching his head over a David Lynch flick, he’s spending time at home in Texas with his lovely wife, Lori and his amazing son. How they put up with him is a mystery, but even Basil Rathbone doesn’t have the time to solve that one.
Dare to Play the Game Tom and Jerry’s Greatest Chases, Vol. 3