The review you are about to read is true. Nothing has been changed. These are the actual people who performed in this great movie and this is exactly the way it really happened. I truly believe this. Signed, Michael Durr also known as Kedrix. Trust me on this one, I couldn’t make up what I’m about to write for this review. If I were to brainstorm for the next twenty years, there would be absolutely nothing to lead me to this movie. (well except for the boobs).

(*warning* The following review might contain salty language, bad jokes and gushing about the female naked anatomy. The writer of this review bares no responsibility for this work and the director, Fred Olen Ray would have wanted it that way.)

A long time ago, an old man named Gideon Fisk (played by David Carradine ) is traveling with a book. He seems frustrated and decides that there is only one way out. Gideon gets a noose and hangs himself. While Gideon kicks out his final breaths, we pan to the book who is mumbling something about it not being over and you haven’t seen the last of him. Wow, did Gideon already watch this movie and decide he didn’t want to be a part of it? That’s rough.

We flash back to present day where a van pulls up to a house and Burt (played by Dick Miller) gets out. He slides open the van to reveal four lovely college girls (PARTY TIME!). He tells them that he is paying them one hundred dollars each if they will clean the house over the weekend. Actually he tells this to their breasts, I don’t think he actually looked at their faces. Not that I blame him.

Burt then finishes up the conversation by telling them no hanky panky by having boys over and that the neighbor next door, Mr. Hinchlow (played by Arte Johnson) has a phone if they need to use it. He then stares one last time before closing the van door and giving the keys to the girls. Burt drives away, supposedly to go find his wife and ask her to put on a college cheerleading outfit for “tryouts”.

The girls go into the house and start putting away their supplies as they talk about the house, how men look at them as objects, breasts, that sort of thing. Huh? What was I talking about? Anyway, they finally decide to start cleaning and choose the basement as their first target. They find a bunch of old trunks (not the swimming kind, the wooden dusty kind) and go through the contents before calling it a day.

They head back upstairs to relax, eat, and watch Roxanne strip off her clothes (I’m not kidding). They try to get Megan to do the same thing but she does the cute nerd I’m embarrassed thing and runs upstairs. This is about the time we hear a knock on the door. They open up the door to reveal Gideon Fisk (But…but…but) who has a package that reads “Open Immediately” in big scribbled letters (also not kidding). They take the package eventually and Gideon runs away screaming into the night. (I didn’t actually hear a scream but I assume one for comedic effect).

The girls open up the package to reveal what looks like the book they show in the opening scene (the one that talked). They thumb through it and decide they can’t read it but it has a lot of dirty pictures. So they get Roxanne to go upstairs and find Megan. Meanwhile, Megan is looking at herself in the mirror (Oh God, she’s topless. I can see clearly now, the rain is gone. It’s going to be a bright, bright sunshiny day!). She puts back on a shirt (BOOOO!) and this is about the time that Roxanne comes in and takes her downstairs.

Megan thumbs through the book and starts to make out the Latin scripture. Of course, after reading aloud she reads a passage that says “This should never be read aloud”. Oh crap. They decide to go to bed except for Roxanne who is going to prance around naked some more and wait for her boyfriend, Biff (played by Don Dowe). She goes into the kitchen to grab a bottle of wine and straddle it with her legs trying to open it (perhaps she is practicing?).

This is the very definition of a campy “B” movie. The kind of movie you watch on USA’s Up All Night with Rhonda Shear in the 90’s. However, this one is different because it isn’t pixilated and you actually see bare breasts kind of thing. Lots of bare breasts. I lost count but I’m willing to watch the movie again to find out. It’s silly, it’s terrible but heck if I didn’t love the thing.

There is no acting worth talking about and you actually wonder how they convinced David Carradine to star in this picture. Actually, after his little incident he had a year ago, it’s not really a mystery, is it? Anyway, this movie is more of a soft core topless fest than a movie with an actual plot. The director, Fred Olen Ray actually made a living off these type of films. He certainly knows his audience.

The only real down side is that the last half hour of the film, there is a brief moment where they actually try to act. I mean they utterly fail of course; but they probably should have kept going in the same general direction they started with. Heck, more topless Monique Gabrielle would have been a big plus. (*mind wanders*) Let’s proceed to the technical portion shall we? 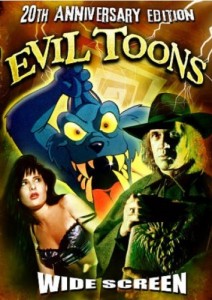 The series is presented in 1.85:1 Anamorphic Widescreen. The film was made on a shoestring budget of $140,000. The director, Fred Olen Ray also makes mention that some of the film was bought on the cheap and damaged to some extent. So, personally it is a marvel that this finally got an anamorphic transfer. Needless to say there is a lot of hazing and grain throughout the movie. It is certainly watchable but don’t expect much.

The audio is provided in 2.0 English Dolby Digital. This is one area I do wish however that would have seen more attention. The volume is very soft and needs a lot of help. Any sound effects are extremely minimal and done for slapstick flavor more than anything else. Dialog is okay, but only if you turn the volume up a good deal. No Subtitles on this one but if there was ever a calling for a descriptive subtitle track, this would get top honors.

So, after watching this movie, I know three things. 1)I’m a dirty old man. 2)Fred Olen Ray is a dirty old man and 3)This film is amazingly bad. It is so amazingly bad, that I actually enjoyed it. Don’t let the rating fool you, it is one of those movies where you totally ignore the rating and make your own laugh track. As long as you like campy movies from the late 80’s/early 90’s with lots of bare boobs, this will be right up your alley.

The more interesting thing is that this is filled to the gills with lots of extras for fans who actually appreciate this type of thing. Fred made a very interesting comment in his commentary. He said he didn’t think there would be anybody willing to do a commentary with him, so that’s why he went solo. Fred, if you ever need somebody to do a commentary with you, I’m 100% game. Recommended for the horndog in all of us. 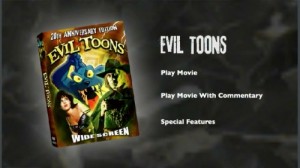 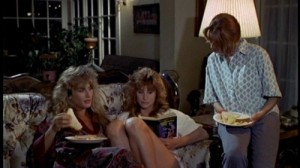 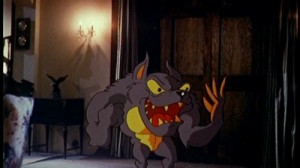 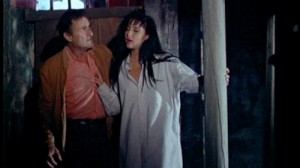 Michael Durr has been reviewing movies for the better part of fifteen years now. He primarily enjoys thrillers, sci-fi, animation and even a little courtroom drama. His favorite films include Escape from New York, the Goonies and anything with Alyssa Milano. When he’s not praising Kurt Russell as the greatest actor of our time or scratching his head over a David Lynch flick, he’s spending time at home in Texas with his lovely wife, Lori and his amazing son. How they put up with him is a mystery, but even Basil Rathbone doesn’t have the time to solve that one.
Tenure Five Corners