If you don’t already know and love the format, you will be inclined – and well advised – to stay far away from Jackass 3. For some oversensitive souls, the sight of adult males getting smacked, slugged, stomped, shocked, slimed, kicked, catapulted and covered with excrement is simply unappealing. I know, sissies, right? But if you relish the notion of seeing men take abuse that makes them moan, bleed and barf, then the third and final (please, Lord) pseudo-documentary in the series is a guaranteed gross-out of a maximum degree. Heck, if you’re lucky, you might even toss your cookies as violently as some of the movie participants themselves.

Johnny Knoxville, the only real actor among these delinquents (he was excellent in The Ringer, A Dirty Shame and Grand Theft Parsons), demeans himself once again, presumably for cash, and possibly because he knows that by turning 40 on March 11, he knows darn well that he better not let himself be run over by a buffalo or crushed by a professional linebacker ever again. And ringleader Knoxville takes the gentlest bashings in the bunch. Experienced victims Bam Margera, Ryan Dunn and Steve-O go through ordeals that are designed to make the audience cringe and the Jackass gang guffaw like drunken donkeys. (There is a real donkey in the film, by the way. It gets the honor of repeatedly kicking one of the guys in the crotch.)

For variety, we get a fearless dwarf named Jason “Wee Man” Acuna, a superb instigator who is mercifully spared the worst poundings – a staged all-midget bar-fight being the main exception. On the other end of the size scale is hippo-shaped blubber-ball Preston Lacy, an amiable doofus who seems agreeable to any utter humiliation. Perhaps he finds it honorable to kneel with apples crammed into his anus while a fully-grown barnyard pig sticks his snout in there for the edible treat. Feeling nauseated yet? OK, we’ll skip the outhouse fecal splash, the diarrhea explosion designed to erupt into a model train display and the penis-striking scorpion skit. There’s more. Lots more. Chapters titled “Will the Farter” and “Lamborghini Tooth Pull” are self-explanatory. Other stunts are more complex and of varying impact.

To review, we watched the 99-minute unrated director’s cut rather than the 94-minute R-rated theatrical version. Frankly, our fragile digestive system discouraged us from attempting to define the five-minute difference, but we’re guessing it involves the segment in which a naked dude uses his genitalia as a bat, attempting to hit a small ball so that a colleague can catch it in his mouth. It all adds up to a monster overdose of pain, disgrace and self-proclaimed stupidity, designed for the delirious delight of drunk and/or deranged teenage boys and those who still share that mind-set. Oh, yes, there is a significant visual plus. Let’s move on to the next section . . .

The 1080p high-def presentation has a 1.78:1 aspect ratio, presented in anAVC/MPEG-4 codec at a bit rate that varies between 21 and 31 Mpbs. Images are sharp and some of the slow-motion photography helps one appreciate the effort that goes into even the dopiest stunts.

But that’s not the coolest part. Jackass 3 comes with four pairs of red-and-blue 3D glasses, and they work! That’s the most exciting part of this woefully dimwitted exercise: It’s in 3D. It’s not the eye-popping, jump-back kind of 3D you get on some movie and Imax screens, but there’s definitely detectable depth on display. Even better, if you get tired of the specs and take them off, the movie looks just fine in 2D, sharp as any other film. Rather than research the technology that makes this happen, we just flipped the glasses on and off a few times and marveled at the results. We also hoped to see the same success on some future Blu-Ray release with, you know, a plot.

The English soundtrack is DTS HD Master Audio 5.1 at 48 KHz. The surround effects are surprisingly distinct. In a program with many flying objects, the rear speakers follow them clearly. Since the spoken dialog consists mainly of shrieks, groans, insults and the rudest profanities, the good audio is wasted except when pop tunes hit the soundtrack. The songs are almost uniformly more pleasant than the misery they are chosen to accompany.

The Making of Jackass 3 (28:39). This promo documentary actually adds some interesting details about how some of the more complicated idiocies were set up and executed. The tech crew had to do some invention and innovation to film fast-moving objects. And we get the mandatory interviews with principals as they rationalize their participation. Bottom line: Besides Knoxville, they can’t really do much of anything else.

3D DVD and 2D digital copy, both of the theatrical version. A second disc has a standard DVD and a digital copy for download to a computer or portable device. For those who just can’t get enough vomit, urine, feces and pain in their line of sight wherever they go.

Deleted scenes (16:05). Nothing startling here, but true cognoscenti will have fun trying to figure why some moronic moments didn’t make the cut.

Outtakes (27:37). There’s some really good stuff here, if by “good” you mean too disgusting to ever get an R from the MPAA. We won’t attempt to give details, but we do suggest that you don’t eat anything before viewing unless you enjoy the flavor of it coming back up.

Trailer (1:31). A mere hint of the mayhem and filth to come. You could show it to your mom and maybe convince her that you aren’t watching anything she’d disapprove. But don’t count on it.

If you sometimes feel that you are a complete loser and that no one on the planet is a more irresponsible, shameless embarrassment than you, you can watch Jackass 3 and feel superior to at least one small group of exhibitionist pinheads.

Enjoy some pictures from the film’s red carpet event: (click on image for full size) 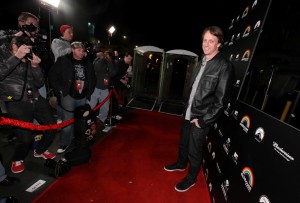 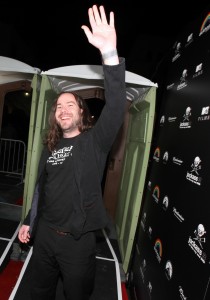 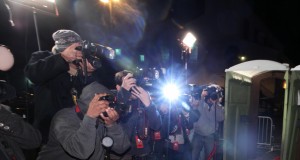 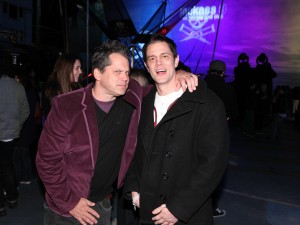 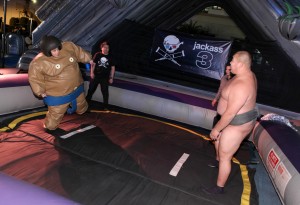