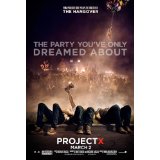 “This party is gonna change everything for us.”

Somewhere a chimp hugs his VHS copy of 1987’s Project X and cries in outrage that this wasn’t a remake ala Rise of the Planet of the Apes (this movie’s age demographic won’t even get that reference). Even feral monkeys would be outraged by the wild behavior exhibited in 2012’s Project X, and that is kind of the point. Brought to us by Producer Todd Phillips (The Hangover) and shot as found footage by first time director Nima Nourizadeh, Project X celebrates excess and debauchery in a fashion that would bring a smile to Caligula’s lips… and it does all with underage kids!

This could only come from the fantasies of a sexually frustrated 14-year-old. Project X is simply this generation’s teens behaving badly comedy, following movies like Porky’s, Risky Business, American Pie and Superbad.  Cooper’s Costa is one of the most annoying and reprehensible teen characters ever captured on film, and he plays it like the worst Jonah Hill impersonation ever. Mann and Brown, however, manage to endear and charm. The opening is stiff and obvious, with the parents’ lecture seemingly telegraphing every debauchery to come, but then the party hits its groove and you can’t take your eyes off the screen.

There are some very crude but funny bits and, in spite of the obvious setups in the open, there are genuine surprises down the stretch which left me laughing out loud. I loved the editing and how it integrates with the music of the party, but as much as I enjoyed the spectacle, the ending seems to tack on the moral that if you provide a place for underage kids to get hammered, even if it destroys said location, you will win the approval of your elders and the adoration of your peers. Oh, and if you are a young woman seeking approval, all you have to do is kick off your clothes and spread your legs.

Party Goer: There’s a midget trapped in the oven!
Thomas: What are they saying?
Kirby: I don’t know. All I heard was midget and oven.