Posted in: Disc Reviews by Michael Durr on March 4th, 2012 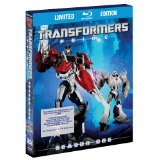 Most people that regularly read my work can probably see my love for the Transformers. We are not talking about the movies either (the first one was decent, the rest were abominations), but instead it is the cartoons that I enjoy so much. Generation One, Beast Wars, Cybertron all hold a special place in my heart. So, when my webmaster mentioned he had season one of Transformers Prime on Blu-ray for me, I think I literally jumped through the ceiling in anticipation. Let us take a look.

Before we begin, I must make mention that this Limited Edition Set includes a full length graphic novel (in digest size) that acts as a prequel to the show. It centers around two main Autobot characters, Arcee and Cliffjumper who start out on the planet of Cybertron but find their way to a strange planet thanks to Spacebridge technology. The main antagonist is Starscream and the story is actually really good. Recommended reading before one even throws in the first disc.

Anyway, the story of the actual cartoon starts a five-part mini-series called Darkness Rising. The Transformers have found their way to planet Earth, specifically Jasper, Nevada. The Decepticons are looking for Energon to fuel their ravenous appetites while the Autobots have settled down in a small canyon in hopes of stopping them. It is the classic Transformers setup, but something is a little bit different here.

The Autobots have some familiar characters in the likes of Bumblebee, Ratchet, and Cliffjumper. They also look to some semi-new characters in the form of Arcee (she appeared in late generation one but is perhaps most famous for being in the last couple of movies) and Bulkhead (first showed up in Transformers: Energon and then Animated (2007)). They are of course led by the one and only Optimus Prime who is still to this day voiced by Peter Cullen.

There are also some humans that help out the Autobots cause in the form of Jack, Miko and Raf. They are all teenagers (well Raf is 12, close enough). They each get paired off with an Autobot (Jack & Arcee, Miko & Bulkhead, and Raf & Bumblebee) who serve as protectors. There are also adults aware of the Transformers’ presence such as Special Agent Bill Fowler who serves as a liaison to the outside world.

The Decepticons also see some familiar faces in the form of Starscream and Soundwave who remain as important as ever. Among some other notables, we get a brand new character in the form of Knock Out. Knock Out is a very egotistical medic for the Decepticons and also comes across as a very vain character. He is assisted by Break Down (some might remember him as a Stunticon from Generation One) who gets into a huge rivalry with Bulkhead.

They are lead by the infamous Megatron (voiced by the one and only Peter Welker) who takes on a very serious tone and is not afraid in his quest to take out the Autobots. That is something to mention, this series is a lot more serious than some of the past animated series (or even the movies) and shows up in the very first episode. Zombies, deaths, and other sacred lines that were never crossed before have no issue being crossed here.

Transformers Prime serves to two different viewer audiences very well. The first being the old Transformers Generation 1 fanbase, who grew up with the characters and pretty much know everything there is know about the mythos. Then we have the adults or children who are of the movie era who are more familiar with the newer interpretations of the characters. Generation 1 fans are probably to be drawn more to Optimus Prime or the
classic story while newer fans will be drawn to the Bumblebee whose character is more reminiscent of the movies.

Being a Generation One fan myself, one of the greatest things I enjoyed was listening to Peter Cullen and Frank Welker voicing Optimus and Megatron. For a moment, I was ten years old again. But Transformers Prime also supports a great voice cast. We get to hear the voices of Kevin Michael Richardson (fans of the Cleveland Show know this guy), Ernie Hudson (Who You Gonna Call? Ghostbusters!), and “The Rock” Dwayne Johnson even shows up for a spell.

The video is in 1.78:1 Widescreen presentation at 1080p. The video is a mixture of 2d animation and CGI and the work is done by Polygon Pictures and Digitalscape Company Limited. The result is simply gorgeous. Some people might be looking for more classic animation but I found the overall production to be great here. Blu-ray does this show a world of good and the colors are fantastic. Backgrounds are usually well done and every effect or piece of animation seems to pop out at the right time.

For the audio portion, we get a 5.1 DTS-HD Master Audio track in English (2.0 PCM track also available). By the same token, the sound track is spectacular. Dialog is crystal clear despite the numerous voices on display here. Still wish I knew what Bumblebee said (that’s a joke btw). Anyway, the sound stage is very dynamic with surround effects and movement comes out of every speaker as necessary. Reference material to say the least and might just wake up a neighbor or two.

Perhaps I am showing my big boy fan boy pants when I gush about Transformers Prime. After all, it is perhaps the most interested I have been in a Transformers cartoon since Generation One. It has a blend of interesting and familiar characters while breaking new ground in the Transformers Universe. There is not much they are not willing to do but they do not do it for shock value but instead do it for a very strong story.

The blu-ray set is phenomenal, with fantastic video and even more amazing audio to bring us a lush landscape and dynamic soundstage. The extras are spot on for the most part and really show how well the creators and franchise were trying to service the fans of this series. I give this set a huge recommendation. Fans will love the cartoon and will have a chance for once to use their blu-ray player to its fullest capability. The robots we all know and love are back, and I can only hope that it is here to stay for a long time.

Michael Durr has been reviewing movies for the better part of fifteen years now. He primarily enjoys thrillers, sci-fi, animation and even a little courtroom drama. His favorite films include Escape from New York, the Goonies and anything with Alyssa Milano. When he’s not praising Kurt Russell as the greatest actor of our time or scratching his head over a David Lynch flick, he’s spending time at home in Texas with his lovely wife, Lori and his amazing son. How they put up with him is a mystery, but even Basil Rathbone doesn’t have the time to solve that one.
Project X Jeremy Fink and the Meaning of Life