Posted in: No Huddle by Archive Authors on March 7th, 2012 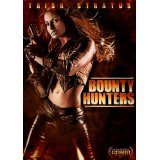 Oh for the love of waffles. Here we go with another simple disc review. This time for a movie called Bounty Hunters. The fact that it has Trish Stratus in it, is just asking for awfulness. I was kinda of surprised that Michael didn’t take this one seeing as it has a female wrestler in it. But hell, this ought to be easy right? Then I put in the DVD, and I am started with some very awful previews (this is not looking good). Somehow, I think those will end up in my husband’s review pile. Hopefully, not mine. Well the load screen is here, let’s jump in shall we?!

Movie starts out with a gun to Jules’ (Trish Stratus) head. In a school girl costume?! Seriously? Dude, who we later learn is Mario Antonio (Enrico DiFede), tries to take a bag full of money. Whoops, we don’t wanna start there! 10 hours earlier! Jules and Chase (Boomer Phillips) are working out in a gym. She is in FULL makeup. Shenanigans. Chase sounds like he is trying to be Ryan Reynolds and Dane Cook meshed together, but is failing hardcore style. They tell a guy working out in the gym that they are going to take him in. He says “no” and here starts a fight. Jules starts beating him up. Finally, after a while, she gets him down.

They go out to the van and talk. Turns out they have another bounty to hit that night. Jules debates on going into work or going to the bounty. Of course, she decides to go after the bounty. They go into a house to get the bounty, Chase is attacked by a crazy chick. They get her to the floor, Peter (Rodrigo Fernandez-Stoll), starts shooting. Girl tells Jules that it’s a just BB gun. Some words are exchanged that make Jules angry and she takes him down. But now she has to go to work. Ho hum.

Imagine that! She works at a strip club. Oh but she is merely a “bartender”. Yeah. Holy hotness Batman! And not Jules. The women in the locker room are smokin’ hot. I personally do not find Trish Stratus attractive, even though she has an elongated “getting undressed and dressed” scene. Into a school girl costume?! Gah seriously? She is way too trashy to even attempt to pull that off. She makes Jenna Jameson look like a complete saint.

So this guy they picked up, Peter, starts trying to convince them that he knows the whereabouts of some high class mob guy. He offers them $100,000 to let him go and go after this other guy. After some convincing, they decide to go back to Jules at her place of employment to try and get her in on it. She doesn’t want to, she knows the mob is just gonna kill this guy, but Ridley (Frank J. Supancic) convinces her to get in on it. Romantic connection between these two? Maybe!

This movie is 100% awful. And in so many ways. The “fight scenes” are so unrealistic and just make you scream “OH, THAT’S SUCH SHENANIGANS!”. Literally, in one scene, they guy just stands there as Jules beats him up. In another part of the movie Chase cannot fight to save his life, and then in another part, he becomes Chuck Norris all of a sudden. Ridley doesn’t really do much but point a gun and terribly read his lines.

I was hoping for this to be one of those terrible but still laughable movies, unfortunately, it was not. They really painted up Trish to look almost like a streetwalker. Going for a bounty in spiked heel boots? Oh, and of course she works out in full makeup. Lots of nudity in this movie, but sorry to disappoint you guys, Trish is not the one getting naked. I am sure however he was content with the costume choice.

Lastly, I have to say something about the bloopers that roll during the credits. Why oh why, was Boomer Phillips not given more funny scenes? The bloopers during the credits were the best part of this entire experience. I sat here with tears in my eyes from laughing because of his scenes. This would have made the movie at least bearable. I wish I could suggest for you, my one lone reader, to throw this on Netflix but I cannot. I would have to totally pass on this. Finishing move! Ow!