Posted in: Disc Reviews by David Annandale on March 8th, 2012 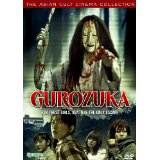 A group of high school girls heads off into the woods to make a movie for their film club. What only the two organizers know is that they are heading for the site of a previous film club’s massacre. Their shoot descended into madness, with a participant in a deigan mask killing all the others, and the whole thing was recorded on tape. It isn’t long after the girls arrive that things start to go wrong, and it seems that history might be repeating itself.

I do like the footage we see of the earlier film – it has a genuinely disturbing quality, and when it arrives, it raises one’s hopes that the perhaps the terminally pedestrian set-up is going to give way to something livelier. No such luck. Much in the way of squabbling, wandering around on one’s own, and off-screen murders transpires. The characters are caricatures when they can be distinguished at all, the cinematography is dishwater dull, and the plot, by the end, makes little sense, though it is very unlikely that most viewers will care one way or the other by then.

The picture is very much in keeping with the film itself: a heaping helping of meh. The colours are natural-looking, but dull and flat. There is a little bit of grain, and the picture is somewhat on the soft side. Most of its uninspiring quality, though, is the fault of the movie itself, and not the transfer. Still, eye candy this is not. The aspect ratio is 1.85:1 anamorphic widescreen.

And more of the same pedestrian qualities here. It does seem a little odd to be encountering only a 2.0 track. Yes, the film is from a few years ago, but from 2005, not 1995. The score is suitably enveloping, but that’s about it as far as a good surround effort goes. The dialogue sounds rather harsh and overmodulated, and at times reaches into the back speakers when it has no business doing so.

The Making of Gurozuka: (23:04) Primarily a montage of behind-the-scene footage and snippets of interviews with the cast (who sure do go on about how cold the shoot was).

The killer’s striking mask is really the only point of interest here. And you can get that from the cover.