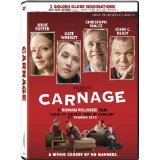 Carnage is the (un)true story of two couples who’ve agreed to meet in a Brooklyn apartment — drink together and have their lives filmed (by Roman Polanski) — to find out what happens when people stop being polite and start getting real. If you had told me that one day I would be relating a Roman Polanski film to the opening credits of MTV’s The Real World, I would’ve told you…yeah, that sounds like something I would do.

Based on God of Carnage by French playwright Yasmina Reza (who also co-wrote the screenplay with Polanski), the film follows Penelope and Michael Longstreet (Jodie Foster and John C. Reilly), who have invited Nancy and Alan Cowan (Kate Winslet and Christoph Waltz) into their home after their sons are involved in a physical altercation. As the two pairs of parents try to agree on a proper course of action, the initially cordial meeting becomes less about their respective sons, and more about their own prejudices, character flaws and childish behavior.

The film takes place in real time, and its 80-minute length means that, unlike the Cowans,  it doesn’t wear out its welcome. That relatively scant running time actually ends up feeling just right because the relentless verbal smackdown these characters — the four main actors are the only people in the movie with speaking parts, if you don’t count voices on the phone or Polanski’s tiny cameo as a nosy neighbor — unleash on each other is ruthless and, in the end, exhausting.

For a story with just one main setting and less than a handful of characters — the comparisons to Who’s Afraid of Virginia Woolf? are understandable, but George and Martha in Woolf are far more openly malicious from the beginning — Polanski mostly succeeds in keeping the inherently uncinematic material visually interesting, even if the script can’t always hide its stage origins and sometimes strains to keep Nancy and Alan in the apartment. The director opens his movie with the brief, violent altercation between the boys (nicely offset by a bouncy score from Alexandre Desplat), but the camera hangs back far enough so that we don’t get a clear look at either of their faces. As a result, we don’t really make a connection nor feel them as characters. Once we’re inside the apartment, Polanski does a good job of establishing items — including an apple-pear cobbler that eventually comes back in a big way —  and often staging his scenes in a way that we can not only see the person who is speaking, but we can also watch how another character reacts in the background. Still, even with a master like Polanski at the helm, the movie never fully takes off as a piece of cinema.

The cast — as you probably gathered from a quartet that boasts 12 Oscar nominations and four wins — is uniformly superb, until most of them have to (over)act like drunk idiots in the final portion of the film. I thought Foster’s intense approach to her passive-aggressive character actually clashed quite effectively with Reilly’s doughy affability and overly relentless friendliness. Meanwhile, Winslet and (especially) Waltz — working their European-actor-doing-an-overly-proper-American-accent mojo — are also impressive as the more well-off Nancy and Alan. I was actually more impressed with Winslet’s great body language than the way she interpreted Reza’s words, while Waltz was simply terrific as the obliviously rude, aggressive-aggressive Alan, who only perks up when the meeting starts to spiral out of control.

The ensuing fireworks feel earned because of the way the story has been set up. I understand some people might be bored by the first half of Carnage and gravitate toward the explosions of profanity, but I was more intrigued and found these characters much more relatable when they were working hard to remain polite and respectable while having strong (or even minor) disagreements. The laughs are more familiar than laugh out loud. The cracks in some of the relationships are there — two people being a little too annoyed with each other because an item of food isn’t served at the proper temperature — if you look hard enough. (Though in the case of Nancy and Alan, you don’t have to look very hard at all.)

Once that veil of civility falls away — with more than a little help from a bottle of scotch — allegiances shift, and the previous hints of misogyny, status snobbery, social irresponsibility and other loaded topics get shoved to the forefront. The problem is, once this starts happening, Carnage stops being a finely-observed comedy of manners and becomes only slightly more fun than arguing with your own significant other. Revelations and actions that are supposed to feel cathartic, end up coming off as a bit silly and extraneous.

If the ending feels rushed and abrupt — followed by a surprisingly upbeat epilogue from Polanski — it’s because the director could smartly sense the movie was fraying on our nerves and needed to make a quick exit.