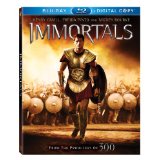 “When this world was still young, long before man or beast roamed these lands, there was a war in the heavens. Immortals, once thought incapable of death, discovered they had the power to kill one another. Lost in the war was a weapon of unimaginable power: The Epirus Bow.”

I know there are a lot of you out there who can’t wait for the huge 300 sequel: 300 The Battle Of Artemisia. You might even have your calendar circled for the Clash Of The Titans remake sequel Wrath Of The Titans, also on the horizon. In case you find that you just can’t wait, director Tarsem Singh has created a weigh-station, of sorts, with his action-packed Immortals. The film takes elements from both franchises and melds them together into something very much like those films, yet unique enough to warrant some of your attention. The result is a film that is absolutely uneven in places, but entertaining enough to be worth a look.

“The victors declared themselves gods, while the vanquished were renamed titans, and forever imprisoned within the bowels of Mount Tartarus. Eons passed. Mankind flourished, and the great war receded from memory. But the evil that once was has re-emerged…”

Theseus (Cavill) is a peasant in a small village about to be attacked by the ruthless King Hyperion (Rourke). He challenges his own soldiers who appear ready to abandon the lower class to their fate. While he gains their respect, the gesture is in vain. Hyperion kills his mother and most of the remaining peasants. For standing up to the King, he is spared, but only so that he can suffer as a slave in the salt mines. In captivity he meets Phaedra (Pinto), a virgin oracle who has foreseen his fate in the epic battle to come. She assists in his escape so that he may find his destiny and stand up to the King and his armies, by first unearthing a mythical bow destined to fall into the wrong hands.

Of course, the gods find favor with Theseus and wish to help him along in that destiny. But Zeus has forbidden such interference on penalty of death. If Hyperion succeeds, he will unleash the last of the Titans, who have been imprisoned for millennia since their war with the gods themselves. With the bow, Hyperion can release them and control their power. The brink of disaster brings the gods to a crossroads. Will they help, or not?

If any of this sounds at all familiar, that’s because it is. Fans of the original Clash Of The Titans will recall much of the same elements of a hero whom the gods favor but who must discover his destiny with only the slightest help. The style of the battles will recall 300. Here you get that same comic book blood splatter and slow-motion slaughter. The film utilizes a ton of computer-generated effects, but they were never as intrusive as I feared. First reports from the filmmakers talked about the image resembling a Renaissance painting, and visions of that terrible Beowulf effect began to fill my brain. I’m happy to report that the effects are indeed stylish. Backgrounds are grand and intended to look a little off. That’s the painting effect, I suppose. But there isn’t any of that CG-over-live-action crap I was worried about. The style is never distracting, but rather leaves you with a feeling that you are indeed watching the unfolding of a myth. It works.

Finally, you have to talk about the strong cast. If you don’t already know who Henry Cavill is, you will. He’s filming the next Superman film, Man Of Steel. He’s, of course, playing Superman/Clark Kent. I wasn’t sure about the choice, and I’m still not totally convinced; however, he does prove here that he might just have the charisma to pull it off. He’s compelling to watch and really has to drive the film, which he appears quite capable of doing. Mickey Rourke is once again a power to reckon with here. He actually starts out a bit stiff, but eventually he becomes King Hyperion and provides all of the villain that the film really needs. John Hurt has a small role as Theseus’s mentor, and he looks the part. Freida Pinto is alluring enough as the oracle. But she never quite gets the chance to flex her acting muscles here. It’s a pretty reserved role that might have done better with a touch more animation, and I don’t mean computer. The real surprise here is the young Luke Evans as Zeus. I won’t deny that I’m used to the old and wise version played by such greats as Sir Laurence Olivier. He doesn’t quite have the compelling voice and stature, but he does play a rather interesting version of the mythical king of the gods. You’ll really have to decide for yourself if it works. For me, I’d say it almost works.

Immortals is presented in its original aspect ratio of 1.85:1. The 1080p image is arrived at with an AVC MPEG-4 codec at an average 30-35 mbps. The image is intentionally stylish, but not as overly so as I expected. Almost the entire production was filmed in front of greenscreen. In the deleted scenes, you can see how rough that can, indeed, look. But this high-definition image presentation is flawless. The f/x work is seamless, and it all provides for some breathtaking images. The film is often dark, but there are no compression issues, so it looks rock-solid. Detail is impressive when you consider how much of this isn’t really there. We’re talking about a strong image that holds up well to scrutiny, even if textures might be the weakest element because of the extensive CG work.

The 3D effects were a post-conversion, and truthfully you can tell where they would have been on this 2D release. I saw it at the theaters in 3D, and trust me when I tell you that you won’t lose a thing here.

The DTS-HD Master Audio 5.1 is quite powerful and easily immerses you into the action. The score is actually very effective. It rouses the senses when appropriate but is just as easily quiet and contemplative, allowing even silence to dominate. You can hear the dialog at all times. It is clear and always dynamic. Subs will roar to life when called upon to do so. The surrounds are cranked. Even subtle sounds like the cry of a hawk pierce through so that you can experience everything just as you were intended to.

It’s No Myth: (5:27) Cast and crew talk about Greek mythology in general and the basic themes and ideas. The focus turns to the film and the essential mythological elements found here.

Alternative Endings/Opening/Deleted Scenes: There’s a wealth of material here including two alternative endings and an opening that includes a young Theseus.

Caravaggio Meets Fight Club: (20:29) This is the making-of stuff in four parts that cover Tarsem’s Vision, F/X, Stunts, and Score. The first part is really a complete love-fest for Tarsem.

There’s plenty of blood and guts to go around. There are epic battles and tragic drama. It’s a pretty good stop along the way toward those other future films. Who knows, we might soon be looking forward to this film’s sequel. The ending certainly sets one up. If enough money gets pulled in… “To those whom much is given, much is asked.”

Gino Sassani is a member of the Southeastern Film Critic's Association (SEFCA). He is a film and television critic based in Tampa, Florida. He's also the Senior Editor here at Upcomingdiscs. Gino started reviewing films in the early 1990's as a segment of his local television show Focus. He's an award-winning recording artist for Omega Records. Gino is currently working on his 8th album Merchants & Mercenaries. Gino took over Upcomingdiscs Dec 1, 2008. He works out of a home theater he calls The Reel World. Favorite films: The Godfather, The Godfather Part II, The Body Snatcher (Val Lewton film with Karloff and Lugosi, not the pod people film), Unforgiven, Gladiator, The Lion King, Jaws, Son Of Frankenstein, The Good, The Bad And The Ugly, and Monsters, Inc.
Tooth Fairy 2 (Blu-Ray) Carnage