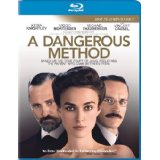 “It seems to me the measure of the true perversity of the human race, that one of its very few reliably pleasurable activities should be the subject of so much hysteria and repression.”

I believe a movie that extensively examines the complex relationship between Carl Jung and Sigmund Freud, pioneers in the field of psychoanalysis and two of the world’s greatest minds during their time, has the potential to be a dynamic cinematic experience. At the very least, it would be intellectually stimulating and serve as a wonderful showcase for a pair of capable actors. Unfortunately, A Dangerous Method is not really that movie.

Sure, the key players are here: an impressively restrained Michael Fassbender stars as Jung, and a stately, lively Viggo Mortensen — who really should’ve had more screen time — plays Freud. The movie also depicts the duo’s first meeting in the early 1900s, as well as their subsequent professional and personal falling out. The problem is not nearly enough time is dedicated to developing and exploring the unique Jung-Freud relationship because too much of A Dangerous Method plays out like any number of generic stories in which a doctor has an inappropriate relationship with his patient.

Enter Sabina Spielrein (Keira Knightley), a bright, deeply disturbed Russian-Jewish patient of Jung’s and the catalyst in this story. Spielrein is a fascinating figure in her own right — she eventually became one of the first female psychoanalysts — and Knightley gives a polarizing, exhausting, vanity-free performance in which adopting a Russian accent was probably the least of her worries. A lot of people will probably cringe (or even laugh) at some of Knightley’s physical tics, but I actually admire her brave, off-putting work.

I wish I could say the same for Christopher Hampton’s script, adapted from his own play “The Talking Cure”, which itself was based on John Kerr’s book “A Most Dangerous Method: The Story of Jung, Freud and Sabina Spielrein.” Besides shortchanging Mortensen’s Freud, the movie is generally content to gloss over any characters or events that don’t involve the Jung-Spielrein connection. It’s a shame the movie only hints at stuff like the father-son dynamic between Jung and the older Freud, their differences (over the importance of religion, philosophy and the nature of the libido), or the eventual bond between Spielrein and Freud over their shared Jewish heritage. When Jung and Freud become estranged, it doesn’t really matter because they seemed like little more than hyper-intelligent pen pals.

A Dangerous Method is directed — with an impressive eye for period detail, but a disappointingly clinical approach — by David Cronenberg. At first glance, telling the story of Carl Jung and Sigmund Freud to cap a trilogy that includes A History of Violence and the naked knife fighting of Eastern Promises seems like curious choice for Cronenberg and Mortensen. Then you realize Cronenberg has directed Crash — the one about people who get aroused by car crashes, not the one where everyone in Los Angeles is racist — and the torture-riffic Videodrome, and suddenly the sexual and sadomasochistic elements in A Dangerous Method seem like a great fit. Sadly, it seems to me like Cronenberg never fully threw himself into the material like he has in the past and was content to make a perfectly respectable period drama. (Even the spanking scenes were relatively tasteful!)

In fact, the only remotely “Dangerous” thing about this movie is Vincent Cassel’s aptly-named Dr. Otto Gross, an unstable disciple of Freud’s who steals the movie despite only being on screen for about 10 minutes. Cassel is fantastic and Gross is responsible for the quote that opens this review, which is still relevant more than 100 years later. He also states, “If there’s one thing I’ve learned in my short life, it’s this: never repress anything.”

I wish Cronenberg had taken Gross’s advice when he made A Dangerous Method.

Tom and Jerry: In the Dog House Contest: Win A Copy of The President’s Book Of Secrets From A&E/History