Tom and Jerry: In the Dog House 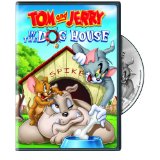 In the 1930’s and 40’s MGM was trying to get in on the lucrative animation game. The field was dominated at the time by Warner Brothers with their Loony Tunes shorts, and of course, the iconic cast of animated characters coming out of the Walt Disney Studio. For years they had failed to find the right property to take advantage of the market. It wasn’t until the team of William Hanna and Joseph Barbera approached the studio with their first project that the times did change, at least a little, for the fledgling animation department at MGM. The project was far from an original one even for the time. It was a very basic cat and mouse adventure featuring a cat named Tom and a mouse named Jerry. There would be almost no dialog on the shorts. It certainly didn’t look like much of a hit to the studio brass, but with no better ideas on the way, they went ahead with the new shorts of Tom And Jerry. There’s a reason why the cat and mouse pair is such a classic. It’s because it works. If you can make your characters entertaining and endearing enough, you can have a hit. MGM finally entered the major leagues, and the team of Hanna and Barbera would become one of the most successful animation teams in history. They would go on to create such cherished characters as The Flintstones, Yogi Bear, The Jetsons, and, of course, Scooby Doo.

These were the days of the Golden Age in Hollywood. These shorts were not being produced for television, which hadn’t been invented when they began; rather, they were intended for theater-goers. In those days going to the movies was much more of an inclusive experience. You always got a cartoon short along with an adventure serial, the likes of Buck Rogers, Flash Gordon, and The Lone Ranger. These multi-chaptered serials were the forerunners to the modern television series. It kept you coming back to the movies to see what would happen next. Each chapter ended in a cliffhanger. These early serials were the inspiration for such film franchises as Star Wars and Indiana Jones. Finally you got one, sometimes two movies, all for the price of a single admission.

Then came television, and suddenly entertainment was available in your living room for the cost of a set. It hit the movie industry hard, and cutbacks had to be made. Over the span of a couple of decades the films eventually appeared alone. Serial and animation production was winding down. MGM was hit about as hard as any other studio, and before long Tom And Jerry were on their way out. But television did much to save the cat and mouse duo. There have been more than a few recent cartoons and some of those are collected here as well.

Collected here you’ll find 22 of Tom and Jerry’s best providing over an hour of crazy antics with Spike and Tyke.

Cat Napping (1951) Hammock Hammock Who’s going to get the hammock. The duo fight over the lazy summer sleeping spot.

Puttin’ On The Dog: (1944) Jerry’s hanging out at the dog pound with Spike. Jerry decides to disguise himself as a dog to get in.

Pet Peeve (1954): When pet food gets too expensive either Tom or Spike have to go. The one who can catch a mouse gets to stay.

24 Karat Kat: (2007) It’s the days of the gold rush at Sutter’s Mill, and Tom and Butch are trying to jump Jerry’s gold claim. Spike is the town sheriff.

Destruction Junction: (2007) Spike is in charge of building a skyscraper, and he hires Tom to do the work. It’s a tough job with Jerry undermining the project.

Beefcake Tom: (2007) The chase leads to a gym where the duo put together their own kind of workout program.

Bend It Like Thomas: (2007) Tom, Jerry and Spike play some ultimate soccer.

Game Set Match: (2007) Tom is trying to teach Tyke how to play tennis, but Spike and Jerry don’t make it exactly easy.

Cat Fishin’: (1947) With Jerry as bait, Tom sneaks into a fishing hole on private property. Spike is in charge of guarding said lake.

The Bodyguard: (1944) Jerry saves Spike from the dogcatcher. Now whenever Jerry is in a jam all he has to do is whistle and Spike comes to the rescue…which is a bit of a problem for Tom.

Quiet Please: (1945) Tom tries to chase Jerry without making a sound after Spike warns him to stop disturbing his nap.

Solid Serenade: (1946) Tom’s trying to impress a little female kitty with his guitar, but Spike and Jerry aren’t happy with the noise.

Slicked-Up Pup: (1951) Spike is trying to keep Tyke clean after his bath. But Tom & Jerry’s chasing keeps getting the little pup all muddy.

The Framed Cat: (1950) First Tom frames Jerry for stealing some chicken. So Jerry gets even by framing Tom for stealing Spike’s bone.

The Invisible Mouse: (1947) Jerry finds a great way to hide when he accidentally discovers a jar of invisible ink to cover his body.

Feeding Time: (2006) Spike runs a zoo where Jerry is framing Tom for feeding the animals.

DJ Jerry: (2008) Tom is supposed to be guarding a record store, but Jerry is using the joint to host hip hop parties for the mice in the hood.

A Life Less Guarded: (2007) Tom and Droopy are competing for the same lifeguard job. Jerry decides to help Droopy win.

Each episode is presented a 1.78:1 matted format or full frame, depending on the year and presentation. When you consider the age of some of this material, you have to be pleased with these prints. There’s a great exhibition of color here. The animation lines are smooth, and the whole thing looks near perfect. There aren’t even that many print defects to distract you here. There is unevenness in contrast and brightness, but all in all these babies are in pretty fine condition. The newer stuff is of course quite pristine. There are some compression issues to deal with here.

The Dolby Digital 2.0 track offers pretty much dialog and music or effects. It’s fine for what it is.

The theme here is dogs, and most of the episodes feature Spike and/or Tyke. I’m still waiting for a rather complete release of the series. There are tons of cartoons here coming from as far back as the 1940’s and others as recently as 2008. It’s three hours of diversion for the kiddies, to say the least. “Oh, no, the baby’s all right. It’s the cat you have to watch.”

Gino Sassani is a member of the Southeastern Film Critic's Association (SEFCA). He is a film and television critic based in Tampa, Florida. He's also the Senior Editor here at Upcomingdiscs. Gino started reviewing films in the early 1990's as a segment of his local television show Focus. He's an award-winning recording artist for Omega Records. Gino is currently working on his 8th album Merchants & Mercenaries. Gino took over Upcomingdiscs Dec 1, 2008. He works out of a home theater he calls The Reel World. Favorite films: The Godfather, The Godfather Part II, The Body Snatcher (Val Lewton film with Karloff and Lugosi, not the pod people film), Unforgiven, Gladiator, The Lion King, Jaws, Son Of Frankenstein, The Good, The Bad And The Ugly, and Monsters, Inc.
Treasure Train (Blu-ray) A Dangerous Method