She’s Not Our Sister 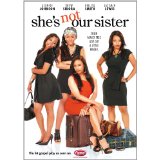 Three sisters have to come together after the death of their father, and in the process discover they have a half-sister they never knew about, and if they can manage to live together for six months they will receive 4.3 million dollars.  This is the simple setup for this train wreck of a film that claims to be powerful and inspirational but instead comes off as shallow and just painful to watch.  Perhaps I’m not the target audience for this, but really I don’t see how there is anyone out there that could endure the 90-minute running time and have anything good to say about this.

This was a musical stage production, and it is hard to not notice this was all filmed on a sound stage considering the over-lighting and the wide shot that always is cut to so that we are reminded  it’s a set and not a real location.  If the camera work isn’t jarring enough for you, there is the equally bad editing and stock footage transition shots.  I think it would be fair to say that this is a failure in every way, and I didn’t even mention the laugh track.  Though to be fair I understand the need to use the laugh track because any real audience would have walked out or simply yelled obscenities, which would have at least made this entertaining to a certain degree.

There are only a handful of characters in this, and you would expect this to be rich with character development, but sadly that was over looked.  Vivian, (the angry older sister) Cynthia, (the middle sister who has a new man in her life) and Deniece, (the youngest and going to college).  If you wanted more to these characters, I’m sorry, but really that’s all there is to them.  Sure they talk about needing to settle down and get married, but there is nothing to these characters but the mindless jibber-jabber that goes on for too long.  The writer apparently wanted us to believe they were all stupid as well, because when the lawyer arrives and tells them  that all “four” sisters need to be there for the will reading none of the sisters comment on this till he is long out the door.  When there is finally something for the girls to talk about, I guess the writer thought perhaps this was not important considering the movie is about them discovering they have a fourth sister!!!!

I feel bad for the actors in this; they try to make this work, but the material that they are given is so clichéd and preachy there is nothing they can do to save this.  The scene at the lawyer’s office when the sisters are told they all have to live together or else they won’t get the money is what pushed me over the edge with this film.  The older sister Vivian doesn’t want to accept her half sister because her father cheated on her mother; she is trying to stand by her morals which should be respected.  Instead everyone else in the room tells her to get over it and just let the half sister move in so they can get the money.  Sure in real life everyone would bite their tongue so they can get the money and after six months simply go their separate ways, but this is supposed to be a movie with a powerful message. It is so lost on me because all this told me is morals and values mean nothing if the price is right.  Of course after the half sister moves in by the end everyone is a happy family and they learn the value of what makes them family, but this revelation is never earned by our characters.  And to make it worse once the revelation is earned, the lawyer decides to give them the money early as though it should be a reward.  I’m sorry, but what is inspirational in that?

This is one of those movies that is so bad it belongs in the DVD collection of every film student so they can have a reference for everything not to do in a film.  If I you want something shallow and materialistic to watch, go ahead and watch the Kardashians on E and skip this.

Brent Lorentson is a horror writer and film critic based out of Tampa, Florida. With a BA in Digital Film, he co-wrote and co-directed Scavenger Hunt. His short stories have appeared in various horror anthologies. In 2019 his short script Fertile Blood will be a part of the anthology horror film Slumber Party. He is currently working on his first novel A Dark and Secret Place set to be released in late 2019. Favorite Films: Taxi Driver, Fight Club, I Saw the Devil, The Wild Bunch, Dawn of the Dead, A Clockwork Orange, Pulp Fiction, Heathers, The Monster Squad, and High Fidelity.
Dirty Sexy Money: Season One Billy the Exterminator: Season 4