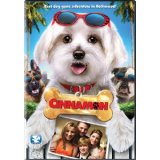 It’s never a good sign when you look up a title of a DVD in your hands and IMDB has no trace of it.  With a little more searching and I found the film but under the title My Dog’s Christmas Miracle, which is only a title that serves the purpose at trying to make a cash grab at suckers with a soft spot for holiday films and talking mutts.  This is one of those films that is somewhat of a rarity, it goes in the so-bad-it’s-good pile.  You know that pile of films you know that are awful but you can’t help but enjoy the disaster that unfolds before your eyes.  Like Ishtar, Troll 2, and numerous Ed Wood films, Cinnamon belongs on this list, but for kids.

Cinnamon is a spoiled Maltese that lives in Beverly Hills with her owner Madeline (Cynthia Gibb) who is a professor at the local college.  Madeline is having terrible luck with dating, which is fine by Cinnamon because she doesn’t want to share her owner.  All is going somewhat well till one day at the college; Cinnamon mistakes a rolled architecture plan for a bone and destroys the plans before Kevin’s (Greg Evigan) big meeting at the school.  Once Madeline and Kevin lock eyes, they are just smitten for each other and can’t stop thinking about the other which is no good for Cinnamon, because this takes the attention from her.  As the two grow closer, Cinnamon grows concerned if her master falls in love she’ll be replaced, so the only option is to do whatever it takes to keep these two lovebirds apart.  The relationship aspect of the film really is the only part that works but will most likely bore kids no matter how much they may love dogs .

The kids that are in this film are underused at best, and when they are on screen it’s just awful, and it’s by no means the fault of the kids; it’s just the scenarios of dealing with bullies and the daughter dating 40-year-old guys pretending to be French that kids will roll their eyes at.  But kids deal with bullies in school, and the media has made this relevant subject matter; this film is out of touch with reality big time.  Having a big redheaded kid pick on the neighborhood boy to impress a girl that’s much younger than he is just doesn’t work for me; seriously, the bully wouldn’t even waste his time, especially when the little girl is far more intimidating than the bully.  The bully ends up becoming more of a generic  comic villain as he eventually kidnaps Cinnamon to show his revenge; he doesn’t really even go through the effort of kidnapping, he just finds her and takes her home.  But still he loves to spot lines more fitting to be read by Cobra Commander than any real child.  Seriously, any bully spouting any of this awful dialog should have their bully card revoked and made fun of daily till such utterances are spoken no more.

There are a lot of editing goofs, plot missteps, and characters showing up in places where they shouldn’t be.  These glaring errors stand out most when you see the green on the dogs face from where the green screen was used for the talking effects.  And my favorite flub is having a character we see go on a plane to Denver to be with his family is suddenly with our main characters spending the holidays with them in Beverly Hills.  Seriously, where was the continuity person while all this took place?

Having to see who the poor soul was that sold his soul to become a filmmaker, little did I realize this gem was made by a filmmaker with some bad cult films under his belt.  The writer and director is Michael Feifer ,who also delivered Ed Gein, Bundy: An American Icon, and B.T.K.  How he managed to sign on for this family film surprises me, but the quality of cinema is about the same, which isn’t really saying much.

Brent Lorentson is a horror writer and film critic based out of Tampa, Florida. With a BA in Digital Film, he co-wrote and co-directed Scavenger Hunt. His short stories have appeared in various horror anthologies. In 2019 his short script Fertile Blood will be a part of the anthology horror film Slumber Party. He is currently working on his first novel A Dark and Secret Place set to be released in late 2019. Favorite Films: Taxi Driver, Fight Club, I Saw the Devil, The Wild Bunch, Dawn of the Dead, A Clockwork Orange, Pulp Fiction, Heathers, The Monster Squad, and High Fidelity.
Dark Shadows Felicity – Season Two