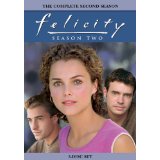 “…So when I walked into the hair cutting place, I was taking a leap. But I wasn’t doing it for a guy — I was doing it for me.”

Season 2 of Felicity features Keri Russell getting one of the most infamous haircuts in TV history. When people think of super-producer J.J. Abrams and his television projects, images from Alias, Fringe and a little show called Lost probably spring to mind. On the other hand, a significantly smaller portion of the TV-watching population may think of the relationship dramedies Abrams has produced, such as What About Brian, Six Degrees and Felicity, by far the best of this latter group. (Then again, Felicity — co-created by Abrams and Matt Reeves — resorted to time travel towards the end of its run, so it probably has more in common with the producer’s genre shows than you think.)

The first season ended in a cliffhanger, with Felicity (Russell) deciding whether to spend a few weeks over the summer with high school crush Ben (Scott Speedman) or nice-guy resident advisor Noel (Scott Foley). The premiere wastes little time answering the question: Felicity chooses Ben, setting the table for a season that focuses more on the Felicity/Ben romance, while pushing Noel into his own story lines (including a pregnancy scare) and de-emphasizing the love triangle.

This proves to be a smart move because it transforms Felicity from what was mostly a three-person show into more of an ensemble piece. The hilarious Ian Gomez is back as Felicity’s coffee shop boss, Javier. Greg Grunberg (as Ben’s entrepreneurial friend Sean) and Amanda Foreman (as Felicity’s wonderfully caustic, Wiccan roomate Meghan) — a pair of scene-stealers in the first season — are now series regulars. Both stand in pretty often for the eye-rolling audience when things get a bit too angsty between Ben and Felicity.

Make no mistake: things get pretty angsty between these two. There are 23 episodes to fill, so we see each of them date other people (Ben has an affair with an older married woman; Felicity hooks up with a grad student/photographer and a jerky guy who runs a health care center). Episode 2 (“The List”) is probably the apex of their craziness, as they start off the episode together, break up, get back together, break up again, followed by Felicity cutting her hair.

Fortunately, the show does a strong job of deepening these infuriating characters and helping us understand why they behave the way they do. (Beyond being young and dumb.) Felicity, a romantic who is too smart for her own good because she over thinks everything, acquires some much-needed self awareness through counseling sessions with Dr. Pavone (Amy Aquino), who calls Felicity out on her BS and teaches her about growing up. Meanwhile, Ben — who only seems to show up when Felicity is with someone else — struggles to figure out what to do with his life, while gradually becoming less selfish. Russell and Speedman are good together and have an easy chemistry, which is mostly what prevents us from wanting to throw a shoe at them.

Overall, I’d say season 2 had more standout episodes than its predecessor. There’s another strong Thanksgiving installment (“Family Affairs”), as well as effective dramatic (“The Slump”, where Dr. Pavone helps Felicity realize why she really moved from California to New York) and comedic material. (Ben and Noel get into a fight in “Revolutions”; “Docuventary II” pokes a bit of fun at the annoying “Dear Sally” device, which was toned down this year.) Of course, the best episodes are the ones that toe the line between comedy and drama, like “The Depths”, where Felicity and Julie (Amy Jo Johnson) get stuck on a subway car and hash out their issues with the help of a bunch of irritated strangers. Then again, the show also wasn’t afraid to get downright weird, offering a random Twilight Zone homage (“Help for the Lovelorn”) that answered the mystery of what’s inside Meghan’s box. Future stars Amy Smart (Road Trip, The Butterfly Effect, Crank), Donald Faison (Scrubs) and Teri Polo (Meet the Parents) are among the featured players.

Season 2 of Felicity may not solve all of the show’s flaws (“Dear Sally”…ugh!), but it does address them. More importantly, this group of episodes expands the scope of the show’s storytelling, while also keeping it quite specific to turn-of-the-21st century college life.

Felicity – Season 2 is presented in an aspect ratio of 1.33:1. I called the season 1 set “one of the worst video transfers I’ve ever seen” largely because it tried to cram 22 episodes into three discs. Well, this one squeezes 23 episodes into three discs, so you can probably guess how that went. We get the same VHS-quality picture with horrible color, contrast, black levels…everything. (Other than that, I really liked it.)

The Dolby Digital 2.0 Stereo track delivers dialogue adequately and gives you a surprising amount of ambient city noise. However, the main issue (as was the case with previous Felicity DVD releases) is that the majority of the songs from the show’s original broadcast have been replaced by lesser-known artists to save on rights fees. This is particularly egregious in season 2, which features Meghan delivering a long monologue about Sarah McLachlan…except there’s no Sarah McLachlan — or anyone else you’ve ever heard of — to be found anywhere.

I think season 2 of Felicity is an improvement over season 1. (Though he played his part well, it was a bit of a shame to see Scott Foley go from leading man to supporting player.) Unfortunately, I still can’t recommend either of these two new DVD releases because they look terrible and offer nothing new in the way of bonus material. Heck, they don’t even offer anything old in the way of bonus material, since the special features from previous home video releases aren’t even included. This set is so shoddy, there’s a typo on the Disc 2 menu. (“Help for the Lovelorne”)

Though they’re available at a good price on Amazon — as low as $10 for each set — save your money and wait for a proper release.