Some Guy Who Kills People

Posted in: No Huddle by Brent Lorentson on July 6th, 2012 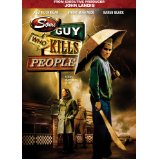 We’ve all heard the phrase “don’t judge a book by its cover”; well ,in this case it should be extended to not judging it by its title either.  I read the title for Some Guy Who Kills People and thought it was a clever ominous title, but the movie that followed didn’t live up to the title but instead pulled a bit hard at the heartstrings.  I came into this one expecting horror and instead got pleasantly surprised by this sweet horror (very loosely fits in this case) comedy about a relationship between a father and daughter.

When we first meet Ken Boyd (Kevin Corrigan) we find him working behind the counter at the local ice cream shop, and with his quiet, creepy demeanor he couldn’t seem more out of place.  It’s soon revealed that he’s been recently released from the local mental institute and is simply trying to start a new life for himself in the world, though it seems he lacks most social skills with anyone he encounters.  In flashbacks we witness the beating he took in high school that has understandably traumatized him through adulthood, but could it be enough to unhinge him to the point of murder?

One by one former classmates of Ken are being found murdered throughout town and with no real suspects, though Ken has a habit of being not far from the crime scenes and is connected to each of the victims.   Investigating the murders is Sheriff Fuller (Barry Bostwick) who not only comes off as a bumbling fool but is also sleeping with Ken’s mother (Karen Black).

To make Ken’s life all the more complicated, his 11-year-old daughter Amy (Ariel Gade) shows up unannounced.  Amy wants to get to know the guy that’s been out of her life these 11 years, and as the relationship plays out with her and Ken it is surprisingly sweet.  She looks up to her dad and sees the good in him unlike everyone else in Ken’s life that see him as simply the guy who went crazy.  Gade handles this role very well as she’s able to handle the loneliness of the character as well as her adorable feistiness with grace;  hopefully any attention she gets from this film can lead the way to some bigger roles for her.

As Amy helps bring Ken out of his shell, she also helps out when giving advice on dating Stephanie (Lucy Davis) a new girl in town that actually is interested in dating Ken.  Though little time passes between these two, their relationship actually comes off rather believable through the ups and downs.  Kudos to the writing and directing here for pulling off this relationship with as little screen time that we get to see Ken and Stephanie together.

I know this is supposed to be a horror comedy, but where is the horror?  It’s here but in short supply as we watch more of Ken’s classmates get dispatched in swift bloody ways.  The crimes never really feel like the focus but instead a distraction.  I love horror and I love slasher films, but that isn’t what this film is, and that’s ok because they managed to win me over with the characters.  Seeing Amy and Ken on a practice date before his big date with Stephanie is far more rewarding here than any of the kills we get to see.  Getting to watch the relationship between Stephanie and Ken unfold was what I wanted to see.

Where the film goes off the rails a bit too much for comfort is in the final act.  Don’t worry I’m not going to spoil anything, but the resolution to the murders just didn’t sit right with me.  I wouldn’t consider this a  twist ending, but for a story that does so well with creating rich characters the actions of certain characters towards the end just didn’t add up for me.

Overall though this was a sweet film that though its title is misleading the end result is a little gem I hope manages to find an audience.   Also on the DVD we get a few nice bonuses; the one I highly recommend everyone to check out is the short film “The Fifth” which was pretty entertaining in its own right.

Also be sure to check out Gino’s interviews with Ariel Gade and Jack Perez.

Brent Lorentson is a horror writer and film critic based out of Tampa, Florida. With a BA in Digital Film, he co-wrote and co-directed Scavenger Hunt. His short stories have appeared in various horror anthologies. In 2019 his short script Fertile Blood will be a part of the anthology horror film Slumber Party. He is currently working on his first novel A Dark and Secret Place set to be released in late 2019. Favorite Films: Taxi Driver, Fight Club, I Saw the Devil, The Wild Bunch, Dawn of the Dead, A Clockwork Orange, Pulp Fiction, Heathers, The Monster Squad, and High Fidelity.
Savages Stone Temple Pilots – Alive In The Windy City (Blu-ray)