Posted in: Disc Reviews by Brent Lorentson on July 6th, 2012 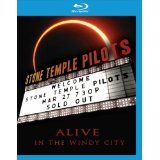 It’s a little hard for me to realize it really has been 20 years since Stone Temple Pilots emerged out of the grunge scene with their album Core.  I remember hanging out at my friends house playing Sega Genesis while listening to this tape (yes, cassette tape) over and over with some Pearl Jam and Nirvana thrown in as well.  For me these guys are like moments of time from my past that I’ll always look fondly upon.  Whether it was my first mosh pit or first house party, this was the music that surrounded me.  I feel the need to divulge this simply because no matter how impartial I may try to be, it’s hard to be critical and removed with every review that comes along.

With that being said, I’m going to come out and say I love this performance.  Once I put this in my player, I cranked up the volume and just allowed my ears to ingest this musical delight.  Sure my neighbors may not have been happy after all the sound hits like a punch, but this is what I’ve come to expect from STP.

This recording is from a 2010 performance STP did in Chicago at the Riviera Theater.  The 18-track song list covers all their hits from the past mixed with some new songs from their current album.  After performing for 20 years, the band still has what it takes to deliver a solid performance as they slither and bounce across the stage.  The Deleo brothers just make it look so easy playing guitar and bass, it’s hard to believe any of these guys performing without the other.  And with drummer Eric Kretz matching their energy, you quickly see how this band has been able to maintain their status after all these years.

As they roll through the set, it is easy to lose track of the time as they move from one song to the next with little to no break between.  My only real beef with this performance, and really it’s a small one, but I wish the band had a chance to break out from just performing the song and work in some extended solos.  The performance is great, but I just wanted just a little bit more; I know I’m being greedy, but I simply blame them for being so good that they keep me wanting more.

Though the performance was great, the decision on how this was cut and shot is what hurts the rating I want to give this.  The performance from the band is a solid 5.  Had I been there in the crowd, I believe this could have been one of the best shows I’d have been to, but the way this was pieced together for the release is bothersome.  The main cameras that are on the band shoot them in full HD glory and they look great, but the cutaway footage looks horrible.  A shot panning over the audience at times seems out of place and simply jarring because it never seems to have any focus, and then they cut back to the band and we’re back to the performance.  But the worst came with the locked-down shot from behind the drummer; it’s one thing to be an unflattering shot, but it seems as though it were not properly calibrated for all the light changes during the show. Had the footage matched what the camera operators seemed to be using when covering the band from on stage, it wouldn’t be such a distraction.

Trippin’ on a Hole in a Paper Heart

Stone Temple Pilots : Alive In The Windy City is presented in MPEG-4 AVC encoded 1080i transfer in its original aspect ratio 1.78:1.  I stated above about the contrast in the quality we get throughout the presentation.  When it’s looking good, the blacks are looking good, we have depth, and the colors and lighting are rich.  When it’s looking bad, it’s usually in wide shots from behind and the sides of the audience and worse from the mounted camera behind the drummer.  It’s a beautiful concert hall; it’s a shame it wasn’t captured better here.  There were no artifacts, banding, or any other digital problems. It appears all the issues are in connection with the choice of cameras used here.

There are two options with the audio, LPCM stereo and 5.1 DTS-HD master audio.  The surround sound was incredible here with Weiland’s lyrics coming through beautifully on the center channel.  On the LFE channel Rob Deleo’s bass chords come out sounding great, and Dean Deleo’s guitar work is placed neatly between the left and right channels.  The crown can be heard through the surround but never takes away from the bands performance.

Interview: (14:56) Here we get the band sitting together discussing the process behind the creation of their new album.  Mixed with some BTS concert footage the interview is pretty much straight forward and something only for the diehard STP fans.

Despite the band’s ups and downs over the past 20 years, they still know how to put on a good show.  All the hits are here, so fans shouldn’t be disappointed, and this Blu ray is a good way to introduce friends to the band that may not be familiar with them.  For those that can’t catch a tour date, this is the next best thing to seeing them live, and you don’t even have to pay for parking.  For fans of the 90s grunge scene this one is for you, and for the long time STP fans, what are you waiting for?   Do your ears a favor and buy it already.

Brent Lorentson is a horror writer and film critic based out of Tampa, Florida. With a BA in Digital Film, he co-wrote and co-directed Scavenger Hunt. His short stories have appeared in various horror anthologies. In 2019 his short script Fertile Blood will be a part of the anthology horror film Slumber Party. He is currently working on his first novel A Dark and Secret Place set to be released in late 2019. Favorite Films: Taxi Driver, Fight Club, I Saw the Devil, The Wild Bunch, Dawn of the Dead, A Clockwork Orange, Pulp Fiction, Heathers, The Monster Squad, and High Fidelity.
Some Guy Who Kills People Law & Order: Criminal Intent: Year Seven