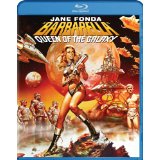 When it comes to campy productions like this, one does not sniff around for Oscar worthy performances…no…we come to see Jane Fonda stiptease in zero gravity. In fact, throughout this tale, Fonda’s Barbarella uses her sexuality as her weapon of choice in the fight against robots, mad scientists, and other extra-terrestrial baddies whom wish nothing more than to see intergalactic angels slaughtered (I swear to you, that was not just me cobbling together random words…all of those things actually happen in this film).

This was a Franco-Italian production, directed by Roger Vadim, who also happened to be married to Fonda at the time of filming. Vadim has a nice eye for shot composition, and his team assembled some impressive sets, even if most of said sets and the costumes were sometimes completely divorced from logic (yet in a magical way). The images on the screen rally between dream and nightmare, or some strange amalgamation of the two, such as Barbarella being chewed on by children’s dolls before being saved by a bear-man and his robot associates.

The lion’s share of the credit for making such ridiculous scenarios function (or just plain watchable at points) goes to Jane Fonda’s flair. This film would still be fun simply based in how it relishes in wondrous nonsense, but Fonda elevates the entire film to a completely different level with her sultry, yet tongue-in-cheek approach to such a role.

The cult status of this film is most likely due to its campy nature and psychedelic mien. That being said, this film is not just incidentally funny, but includes a lot of comedic material on purpose. There is no way there could be a scene where Barbarella makes love to a humanoid alien by pressing one hand together, fully clothed, and have it be so mysteriously intense that it re-styles their hair, and be considered serious. There is a level of self-awareness the makers of this film had that aided their effort to deliver something that is not being laughed at, but is able to bring its audience in on the joke.

Talks of a remake have been floating around years, and have resurfaced again. This Blu Ray release makes for a great refresher course on what the buzz is truly about. A remake would not be able to recreate the strange, creative energy from the 1960s that fueled this manic venture into science-fiction. This film is visually married to the decade it came from and shall forever appreciated for that very reason.

(Fun tidbit for you movie trivia hounds out there: viewers should look close for world famous mime, Marcel Marceau in a rare speaking role).

Widescreen 1.78:1. This filmed has transferred very nicely to Blu Ray. Great care has been made to ensure that not a single psychedelic splash of rotating colours are dampened. The HD quality does make some of the f/x appear all the obvious, but it’s a worthwhile trade to have this film’s finer moments shine with a beautiful picture quality.

Dolby Digital Mono in English, French and Spanish. Subtitles available in the same languages, plus Portuguese.

Though the surrounding speakers are left dormant, the Mono tracks still sound quite impressive.

Bilingual fans get an extra special treat because this film was shot in English and French simultaneously, but much of the English is dubbed to remove accents. This makes the French track much more natural, especially since Fonda is fluent in French and did not need dubbing whatsoever.

Theatrical Trailer: I have to admit, I don’t see a lot of trailers these days getting away with showing a woman having an monstrously intense orgasm while also using the term “wing-dinger.” I tip my hat to thee.

Somewhere between Flash Gordon and Flesh Gordon, lies Barbarella (and please try not to let that evoke any sort of letter to “Penthouse” style scenario in your mind just now). Camp is not meant to be judged, but enjoyed purely for the sake of enjoyment. Treat your brain to a night off when watching this film.