Posted in: No Huddle by Gino Sassani on September 13th, 2012 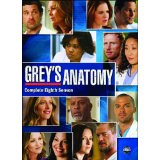 Grey’s Anatomy was originally going to end in its 8th season, and the final episode nearly leaves us with a pretty good indication that it would actually happen. The show’s fate was on the bubble for a little while and it seemed that both Grey’s and its sister show Private Practice might be leaving the airwaves forever. Of course, now we know that both shows are returning in the fall. Both will have major shake-ups. Without seeing the first episode of the upcoming season I’m left with some doubt as to how much of the show’s current format will remain intact. As it was there were some serious events leading up to the explosive cliffhanger.

Grey’s Anatomy follows the life and tribulations of a group of doctors and interns at Seattle Grace Hospital. There’s certainly nothing original about the premise, except that the story is told by one of the more unlikely characters, Dr. Meredith Grey (Pompeo). As a lead she’s really not all that remarkable, but the show doesn’t put everything on her narrow shoulders. The series is populated by a solid supporting cast, giving it all a far more ensemble feel despite the title. James Pickens, Jr. is perhaps the most extraordinary actor in the show. He’s underused, but steals every scene he’s in. His Dr. Webber is a powerfully serious voice in an otherwise often frivolous world. Chandra Wilson as the once-intern teacher Dr. Bailey is another standout performance, offering tremendous range. Her character, often referred to as a Nazi by her interns, is capable of outstanding empathy just when it’s required. Too many of the characters serve as eye candy, but I can’t say that any of them don’t have some good acting chops. The show is also populated by Patrick Dempsey as the “McDreamy” Doctor Shepherd. Rome’s Kevin McKidd as ex-Army doctor Owen Hunt who is recovering from psychological trauma from his days in combat. Jessica Capshaw is the always bright and cheery Dr. Arizona Robbins, who runs the hospital’s pediatric unit. She’s an item with rough-around-the-edges Callie. The hospital’s cosmetic surgeon and resident playboy is Mark Sloan, played by Eric Dane. This is the sleazy guy that fans love to boo and hiss at. Chyler Leigh plays Lexie, Meredith’s young and often too-optimistic sister.

The season begins with Meredith having to face serious consequences for her cheating in Derek’s Alzheimer’s clinical trial. It put Dr. Webber in a position where he needed to put his own trial in someone else’s hands while he tries to take the hit for Meredith. He still feels a debt to Meredith’s mother, and he’s thankful that she cheated to help his wife. The move also costs her the job, at least for a short while, and more importantly her adopted child.

The season is also about the tension in the various relationships. Of course, there’s tension between Meredith and Derek, but the show really focuses on the other relationships as well. The Arizona, Sloan and Callie relationship deals with the new baby in their lives. The once-interns are growing up into full-fledged doctors now and that means a ton more responsibility as they each find out in their own ways. A huge character dies, and that’s going to send a rather titanic emotional wave through each of these characters.

Another way the season is defined is by the crew’s medical boards. The growing up is concluded, and that means finding jobs for most of our favorite characters. It’s going to be hard to keep everyone intact, and so a radical change is expected, really needed, for the show to continue.

The extras included some deleted scenes and a blooper reel. The extras are starting to drop on these releases. The only really original piece is the 15 minute Journey Home With Kevin McKidd where he goes back to his small home town in Scotland and records an album of traditional music with the locals.

With a 9th season coming, I don’t see Grey’s Anatomy having the legs to go much longer. It’s not really a knock on anything the show has done. In a way, it’s a compliment. The show has evolved to its natural exit point. To stay any longer would be to blemish everything that has gone before. That doesn’t necessarily mean the end for all of these characters. I’d like to see some of them spin off and start their own story elsewhere. All of that remains to be seen but the end of this format is most certainly in sight. “It really won’t be long now.”

Gino Sassani is a member of the Southeastern Film Critic's Association (SEFCA). He is a film and television critic based in Tampa, Florida. He's also the Senior Editor here at Upcomingdiscs. Gino started reviewing films in the early 1990's as a segment of his local television show Focus. He's an award-winning recording artist for Omega Records. Gino is currently working on his 8th album Merchants & Mercenaries. Gino took over Upcomingdiscs Dec 1, 2008. He works out of a home theater he calls The Reel World. Favorite films: The Godfather, The Godfather Part II, The Body Snatcher (Val Lewton film with Karloff and Lugosi, not the pod people film), Unforgiven, Gladiator, The Lion King, Jaws, Son Of Frankenstein, The Good, The Bad And The Ugly, and Monsters, Inc.
For Greater Glory: The True Story of Cristiada (Blu-ray) The Good Wife: The Third Season