The Good Wife: The Third Season

Posted in: Disc Reviews by Gino Sassani on September 13th, 2012 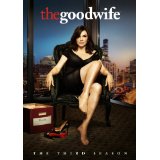 The title might be a bit misleading this year. Alicia is not so “good” this season. She’s tougher and more willing to make the hard choices. She’s more cutthroat in court and even when it comes to asserting her position in the firm and with her cheating husband. This is not the “stand by your man” show it might have appeared to be when it began. It’s evolved, and that only makes for better television.

The series is not really a lawyer procedural, at least not on the surface. The first images of the pilot lead us to believe we aren’t getting a legal drama at all, but a political one. Chicago’s State’s Attorney Peter Florrick (Noth) is walking to a podium with a large anxious crowd of press with microphones and cameras flashing. He’s clutching the hand of his wife Alicia (Margulies) as he approaches the buzzing audience. The event turns into a scene we’ve seen quite frequently of late. A politician must apologize for a sex scandal with his bewildered wife standing beside him trying to hide all of those feelings of anger and betrayal that you know she must be feeling. Florrick is resigning his office, admitting to indiscretions but denying reports of corruption that have apparently been looming over his administration. At first you are sure, in spite of the show’s title, that this is Peter Florrick’s story. It’s not. From this point on the focus will be almost entirely upon Alicia.

Alicia has been thrust into a new life. Her husband has been disgraced and has been convicted of corruption. She’s been forced to abandon her luxury home and has moved herself and her two children into a much smaller apartment. She’s no longer moving in the elite social circles. She also has to get a job. With Peter’s mother (Peil) helping to watch the kids, Alicia seeks a job at the firm of an old college sweetheart, Will Gardner (Charles). Gardner still has feelings for her, and she is hired as a junior associate. But there’s a catch. There have been two junior associates hired. In six months only one of them will still have a job. So she’s in competition with the much younger and more ambitious Cary Agoes (Czuchry). Life is very complicated. The stay-at-home mother now is working long hours. She’s also inundated with images of her husband’s fall from grace, including YouTube videos of the sting that brought him down and his call-girl lover doing the daytime talk circuit. She is recognized wherever she goes. The firm is counting on her to cash in on her husband’s connections. Meanwhile, she’s quite good at her job and finds herself the key to many of the firm’s cases.

The cases do provide the stability for the show, but unlike many legal procedurals there is a rather complicated mythology to the show. The mythology plays out a little bit with every episode. One such arc involves the children Zach (Phillips) and Grace (Vega). Now Peter’s is cleared of his corruption charges and back in the State Attorney’s office. Of course, the marriage with Alicia is still held together in the public eye, but they are still very much apart.

Michael J. Fox has a pretty compelling recurring role as Canning, the head of a rival firm that wants to bring down Alicia’s firm and is willing to do anything to make it happen. He’s by far the best of the show’s “bad guys”, and we can only hope to see more of him in the future. It’s kind of brave for Fox to allow himself to be seen as such a bad guy. It’s great playing against type and makes us all the more eager for his expected return to his own prime-time show.

Kalinda gets the most interesting arc this season. She has to deal with the strain her affair with Peter has put on her friendship with Alicia. She also has a rather mysterious past that is coming back to haunt her and possibly Alicia. Her loyalties are being questioned with almost every episode, and you really start to wonder where she’s going to end up.

Of course, there are the cases each week. They often involve a client who is either not guilty of something or is being taken advantage of in some legal way. Alicia is helped by Kalinda Sharma (Panjabi), who is the firm’s private investigator. The two bond, and Kalinda also helps give Alicia a leg up on her competition with Cary, who will stop at nothing to win. Gardner’s partner in the firm is Diane Lockhart (Baranski) who is a super liberal, but finds her own side to be as shady as she has perceived the other side to be. While there is an obvious liberal slant here — what else — I have to admit there is more balance than these shows typically allow.

I like the fact that this series is not so single-minded. I’ve never been a huge fan of Chris Noth going back to his Law & Order days, but I have to admit he plays the slimy politician quite well here. His story starts out slowly and builds as we get closer to the end of the season. The writers have done a superb job of balancing these show arcs with compelling legal drama. In the end you have something quite fresh and original here. It doesn’t hurt that there are some familiar situations that are obviously inspired by both the political and even Tiger Woods scandals. The season ends with a cliffhanger. As Peter is about to launch his campaign, Alicia is in a will-she-or-won’t-she moment, torn between Gardner and Peter. We’ll have to check back in the next season to see what she does. I’m not sure I’m on the edge of my seat here, but I’ll be back.

Each episode is presented in its original broadcast aspect ratio of 1.78:1. The show has a very dark feel with its color scheme. It was recorded on the Genesis HD camera system, which does not like the color white. You won’t see much white anywhere in the show. The colors in both the environments and the sets are very dark and moody. You get a sense that it’s always winter, because lighting is usually very cold. Black levels are only fair. This might be a better show in high definition.

The Dolby Digital 5.1 serves dialog. That’s all there is, folks.

There is an Audio Commentary on many select episodes.

There are deleted scenes on most episodes. They can be found on the disc with the episode itself.

The episodes are spread over 6 discs. Other extras include:

The Good Wife – A New Beginning: (21:40) A look at the newer, tougher Alicia. This was obviously a television special.

A Bi-Coastal Affair: (12:41) The feature looks at how the production deals with filming on one coast and having the support staff on the other.

Research And Development: (14:09) This feature looks at the prep that goes into each episode.

Alicia Florrick At A Crossroads: (29:42) This is really a season summary.

There is some true sadness here. Tony Scott was one of the show’s producers and his suicide will leave quite a hole in the production. I know he likely had little to do with the everyday running of the series. Still it will be a sad moment when everyone gets back together. The show has grown quite a bit and still has room to go. The final episode leaves us with the unexpected cliffhanger that will be a pretty sweet springboard for next season. “Don’t let the name fool you.”

Gino Sassani is a member of the Southeastern Film Critic's Association (SEFCA). He is a film and television critic based in Tampa, Florida. He's also the Senior Editor here at Upcomingdiscs. Gino started reviewing films in the early 1990's as a segment of his local television show Focus. He's an award-winning recording artist for Omega Records. Gino is currently working on his 8th album Merchants & Mercenaries. Gino took over Upcomingdiscs Dec 1, 2008. He works out of a home theater he calls The Reel World. Favorite films: The Godfather, The Godfather Part II, The Body Snatcher (Val Lewton film with Karloff and Lugosi, not the pod people film), Unforgiven, Gladiator, The Lion King, Jaws, Son Of Frankenstein, The Good, The Bad And The Ugly, and Monsters, Inc.
Grey’s Anatomy: The Complete Eighth Season Private Practice: The Complete Fifth Season