For Greater Glory: The True Story of Cristiada (Blu-ray) 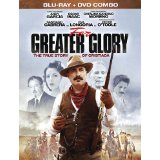 Less than 100 years ago, the Mexican government declared war on the Catholic Church. This movie tells the story of the ensuing conflict known as Cristiada (also called the Cristero War), which took place between 1926 and 1929. In showing us all the different ways war can affect a country and all the different ways rebels can contribute to a cause, the movie sort of forgot to tell us why the Mexican government declared war on the church in the first place.

For Greater Glory is told from the perspective of the brave souls who stood up to the oppressive Mexican government led by President Plutarco Elias Calles (Ruben Blades). This includes members of the non-violent National League for the Defense of Religious Liberty like real-life figure Anacleto Gonzalez Flores (Eduardo Verastegui) and a woman named Adriana (Catalina Sandino Moreno). The men and women who take up arms to join the cause — including a flashy, badass rebel named Victoriano “El Catorce” Ramirez (Oscar Isaac), who earned his nickname by single-handedly killing 14 men — are known as Cristeros.

The Cristero cause is greatly outnumbered but includes pastor-turned-soldier Father Vega (Santiago Cabrera), a boy named Jose (impressive newcomer Mauricio Kuri) who had gotten his religious education from friendly Father Christopher (Peter O’Toole), and Enrique Gorostieta (Andy Garcia) the real-life former general and atheist who winds up leading the Cristeros.

With a reported $12 million budget, For Greater Glory is among the most expensive films made in Mexico. Please don’t think the previous statement means that For Greater Glory is also one of the most ambitious films made in Mexico. Sure, this production boasts solid star power, including three Oscar nominees (Garcia, O’Toole and Moreno), a TV starlet (Eva Longoria in a mostly inconsequential role as Enrique’s wife) a salsa superstar (Blades) and a solid stable of supporting players (Isaac, Bruce Greenwood, Nestor Carbonell).

However, the film comes up short in terms of delivering its story in a dynamic and cohesive manner. The first hour, in particular, sprawls to the point that the movie feels disjointed. We check in with all the different characters, but we’re not given time to fully connect with any of them. I believe an interesting movie could have been told from the perspective of either young Jose, skeptical Enrique, or from the women like Adriana who risked their lives to bring the rebels ammunition and other supplies. Unfortunately, screenwriter Michael Love chose all of the above and none of the above at the same time by hopping from one point of view to another.

There’s also not a ton of room for subtlety. Almost all of President Calles’ scenes are accompanied by evil, foreboding music. (To say the movie is one-sided would be an understatement.) Though the battle sequences pack a punch, they’re not staged with a great amount of imagination by director Dean Wright (they’re the type where the good guys don’t miss much), in his feature film debut.

About the only place where Wright and Co. held back with their R-rated film is in depicting several executions: rather than show the person killed, we see the reaction of a loved one as it happens. (Then again, even this loses some of its impact after the third or fourth time.)

In fact, the movie doesn’t really come together until the Cristeros decide they need to hire Gen. Gorostieta to organize their scattered rebel forces. Just like the general pulls the Cristeros together and turns them into a formidable army, Garcia anchors the film and gives it some emotional resonance. (Too bad this doesn’t happen until more than hour into the film.) He manages to do this despite the fact that his conversion into a believer and his father-son bond with Jose feels rushed.

Besides Garcia and the affecting Kuri, the other standout is Isaac as the flashy “Catorce”, if only because he gives the movie a much-needed kick in the ass. O’Toole brings a pleasing spark to his role as a priest who is too old and stubborn to back down to the Mexican government, but he isn’t in the film long enough to leave a lasting mark.

In the end, For Greater Glory is a square, well-meaning chronicle of a crucial, little-known chapter of Mexican history.

For Greater Glory: The True Story of Cristiada is presented in its original aspect ratio of 2.40:1. The 1080p image is arrived at with an AVC MPEG-4 at an average of 32 mbps. I may not be crazy about the actual movie, but the Blu-ray’s video presentation is fantastic. The sharp presentation and vivid colors of the Mexican landscape — with an emphasis on earthy yellows and reds — make a great early impression. The image is clear without sacrificing texture, which is evident in both the actor’s faces during close-ups and their costumes or props in medium shots.

The fine amount of detail is also evident during darker scenes, including an assault on “Catorce” at dusk. Smoke and dust are visible without compromising the strong black levels on display. The only minor imperfections I spotted involved some slight blurry edges when several characters were zipping along the desert on horseback. But that’s a negligible issue and this is, overall, a terrific transfer.

The DTS-HD Master Audio 5.1 track isn’t as impeccable as the visual presentation, but it gets the job done nonetheless. It particularly bursts to life during battle sequences, where the speakers push shots from a distance to the rear while the gunfire from the main characters explodes from the center. The low end of the track handles the galloping of horses or the chugging of a train nicely. Though there are sporadic atmospheric noises during several scenes, I would’ve liked to have heard a bit more immersion and a bit less of the sweeping, intrusive score by James Horner. The dialogue could’ve been clearer in spots, but is generally intelligible. There are also several spots involving Spanish chants that aren’t subbed in English.

The True Story of the Cristeros: (26:49) This behind-the-scenes featurette makes the point that part of the tragedy of the Cristero movement is how this period from Mexico’s past has been mostly wiped away from history books. (Andy Garcia admits one of the reasons he signed on is because he was intrigued by the fact that he’d never heard of Cristada.) Contemporary clergymen put the movie’s story in a deeper historical context and tell us more about the real-life figures depitcted in the film. There are also comments from a surviving Cristero. This may the only special feature, but it’s a good one.

For Greater Glory clocks in at a bloated 145 minutes. History gave the filmmakers more than enough compelling material to fill that relatively extended running time.

Unfortunately, they bit off more than they could chew in terms of how many of those stories to follow, including a subplot involving the U.S. Ambassador to Mexico’s (Greenwood) attempts to squash the conflict and preserve the presence of U.S. oil companies in Mexico that absolutely could’ve been relegated to the deleted scenes. The result is that a lot of things happen (and they happen beautifully thanks to this Blu-ray), but very few of them make an impact.