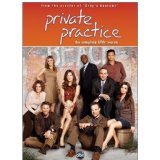 Shonda Rhimes had a big hit on her hands with Grey’s Anatomy, so after five years she did what comes naturally in her situation. You spin the success off in the hope that the fans can’t get enough in just one night. At first it appeared to me she had chosen the wrong character to put out on her own. I mean, I never considered Kate Walsh as Addison to be one of the show’s more compelling characters. The show was presented as what the business calls an imbedded episode on Grey’s. What that means is that the situation is set up during one of the original show’s episodes. In this case a two-parter called The Other Side Of Life. The idea is that you want to be sure that your existing show’s fans at least watch the pilot in the hope that they will consider it a part of their beloved series. I got to watch that episode when I was called upon to review the fifth season of Grey’s.

Dr. Addison Montgomery (Walsh) is looking for a change. She’s feeling a little burned out in Seattle at Grace Memorial Hospital, where she carries a ton of baggage. She heads down to L.A. to visit a friend who has his own clinic in the sunny city. The clinic practices something called co-op medicine. Specialists from various fields come together to treat their patients in a more holistic manner. Dr. Naomi Bennett (McDonald), specializing in fertility, and her ex-husband Dr. Sam Bennett (Diggs) started the place. Dr. Violet Turner (Brennemen) and Dr. Sheldon Wallace (Benben) are the clinic’s shrinks. Dr. Cooper Freedman (Adelstein) is the pediatrician. Dr. Peter Wilder (Daley) is the herbal medicine specialist. He’s also got a rep for sleeping with all of the other women and even running some out of the clinic. Dr. Charlotte King (Strickland) is a partner and also chief of surgery at the hospital. Derek’s sister Amelia (Scorsone) has also dropped in as the staff neurologist.

What happened was that a well-cast show won me partly over. I ended up enjoying the episodes more than I expected. I still find all of this musical-beds soap-opera stuff tedious, but I also discovered that Private Practice might actually be about more. OK. It’s not. Still, the show is incredibly well cast, and that has been its saving grace, if you will. It’s almost as if Rhimes put together an all-star baseball team. Almost every member of the cast had been in shows where they were the top character. Kate Walsh might be the least-known member of the cast, at least to the non-Grey’s Anatomy fans out there.

The season appears to be about children and the couples. It seems that children come into many of the casts’ lives this year. Addison adopts a child from one of her patients and wants to raise the child with Sam. A child also comes into the lives of couple Charlotte and Coop. Of course, Violet and Peter are dealing with their growing son. The best new performance has to go to young Griffin Gluck as Mason. He’s the kid that Coop ends up with. The kid’s mother is dying and wants him to have a good home. It’s quite an emotional performance by the talented actor. There are a lot of kids in this season. You’d think it might tame down the sexploits. There you’d be wrong. Still, the series continues to explore the deeper emotional issues that don’t really get covered as much on Grey’s.

The big new star to enter the show is Benjamin Bratt as Dr. Jake Reilly. He’s the newcomer and, of course, the show’s “hottie” for the female viewers.

Each episode of Private Practice is presented in a 1.78:1 aspect ratio. This is a nice transfer that seems to work almost all the way around. Colors are near-perfect reference, particularly flesh tones. Black levels are nicely rendered, adding a depth of detail to the darker scenes. This is a brighter palette than Grey’s was. The lighting reflects the sunny California climate as contrasted with the drab overcast lighting that represents Seattle in Grey’s. The bright lighting and flashier colors work well in this transfer. It might even be the brighter atmosphere that makes this show a little bit better, in my opinion, than Grey’s.

The Dolby Digital 5.1 track works. The film utilizes the common trend of using music to work a few montage images into the story. The music is not merely stereo mixes thrown into the bunch, but decent 5.1 mixes in their own right. Dialog, which is essentially the entire show, is always upfront and center where you’re sure to catch every word.

There are Commentary Tracks on select episodes. Mostly it’s a lot of glowing love-fest stuff.

Deleted Scenes: There are scenes from several episodes.

The Practice Of Parenthood: (12:29) Here’s a look at the child invasion that is the season.

Things are about to change big-time on Private Practice. This season is the last you’ll really see of this great cast together. Don’t miss out on the opportunity. “It’s all about to get weird from here on out”.

Gino Sassani is a member of the Southeastern Film Critic's Association (SEFCA). He is a film and television critic based in Tampa, Florida. He's also the Senior Editor here at Upcomingdiscs. Gino started reviewing films in the early 1990's as a segment of his local television show Focus. He's an award-winning recording artist for Omega Records. Gino is currently working on his 8th album Merchants & Mercenaries. Gino took over Upcomingdiscs Dec 1, 2008. He works out of a home theater he calls The Reel World. Favorite films: The Godfather, The Godfather Part II, The Body Snatcher (Val Lewton film with Karloff and Lugosi, not the pod people film), Unforgiven, Gladiator, The Lion King, Jaws, Son Of Frankenstein, The Good, The Bad And The Ugly, and Monsters, Inc.
The Good Wife: The Third Season The Vampire Diaries: The Complete Third Season (Blu-ray)