Juan of the Dead

Posted in: No Huddle by Brent Lorentson on September 19th, 2012 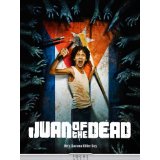 “Juan of the dead we kill your loved ones”

This is one of those movies I had heard about but was beginning to wonder if I’d ever get a chance to watch.  The notion of Cuba releasing a zombie comedy just kind of shocked me.  To be honest I didn’t even know they had a production company down there.  So when I noticed this title had come in to be reviewed at the Upcomingdiscs headquarters, I jumped on this, willing to fight off hordes of zombies if need be.  Thankfully there were no masses of the undead to be dispatched, and this title was mine to review.

We start off just off the coast of Cuba with our hero Juan (Alexis Diaz de Villegas) lying on a raft.  Suddenly emerging from the surface is Lazaro (Jorge Molina) who’s been harpoon-fishing beneath the surface.  The two discuss the prospect of one day just continuing to paddle out to try and make it to Florida, but Juan loves his homeland and simply can’t see any other life for himself.  The two notice a body drifting towards them.  As they investigate they discover the body isn’t as dead as it appears, and by mistake Lazaro fires the harpoon into the zombie’s chest.  Seeing no one has noticed, they agree to never speak of the incident again.  This was only the start, and I was already having fun with this movie.

As we meet the rest of Juan’s group which consists of a La China (a cross dresser), Vladi California (Lazaro’s pretty boy son), and El Primo (the giant of the group who faints at the sight of blood).  This is a group I would have enjoyed watching even if there were no zombies involved, but thankfully there is plenty of undead bloodshed to be had. The other relationship that we get to follow is the one between Juan and his daughter Camilla.  Their relationship is fractured from him being a bad father when she was younger and she has plans to return to Miami to live with her mother.   The heart of the film comes from Juan’s need to keep his daughter safe, and it’s in simple looks towards his daughter that we see this love and need to protect.  I hope this role can fetch de Villegas some jobs in the states, because the guy has a good on screen presence.

While the film progresses and the outbreak spreads, we are given many fun and original sequences.  A standout scene consists of numerous people trying to flee Havana on several rafts and the people being pursued by zombies beneath the surface.  The CGI isn’t the best, but major points for giving us such a cool and original shot .

Since Juan understands escape is futile and they have no choice but to survive against the hordes of zombies, he conceives a plan that can make them all some money.  The plan is simple they’ll put up flyers all around town, and for a fee they will kill your undead loved ones.  Here we get to see La China dispatch zombies with his/her slingshot, a blindfolded El Primo snapping necks, Lazaro going crazy with some machetes, and Juan doing battle with a pair of nunchucks and an oar.  Some of the kills are over the top and gore-filled, and others are simply hilarious.  Nothing is sacred here, not even the elderly or the handicapped.

A rooftop sequence towards the end of the film as Juan and Lazaro await sunrise is a scene that sticks with me the most, and it doesn’t even involve a zombie.  Just the simplicity of the conversation between lifelong friends with the thought of death awaiting them at any moment just seemed like the same conversation I would have with one of my longtime friends.  Granted I don’t believe it would ever go the direction their conversation goes, but it’s the levity in these heavy moments that kept a smile on my face throughout this film.

There is so much to like here I could go on and on, but I really don’t want to take away from the fun you’ll have with this movie.  Like Romero’s Dead films, there are some political overtones, but they are very subtle, and what’s refreshing about this film is being dropped into the streets of this country seeing the beauty and how poverty-stricken it is.  What Alejandro  Brugues  delivers is a beautiful piece of film that just happens to have a lot of zombies.  The way he was able to control the humor, the horror, and the heart of this film has me believing this is not a one-hit wonder director but one that we should all keep an eye on.

Brent Lorentson is a horror writer and film critic based out of Tampa, Florida. With a BA in Digital Film, he co-wrote and co-directed Scavenger Hunt. His short stories have appeared in various horror anthologies. In 2019 his short script Fertile Blood will be a part of the anthology horror film Slumber Party. He is currently working on his first novel A Dark and Secret Place set to be released in late 2019. Favorite Films: Taxi Driver, Fight Club, I Saw the Devil, The Wild Bunch, Dawn of the Dead, A Clockwork Orange, Pulp Fiction, Heathers, The Monster Squad, and High Fidelity.
Lola Versus (Blu-Ray) Castle: The Complete Fourth Season