Posted in: Disc Reviews by Michael Durr on September 18th, 2012 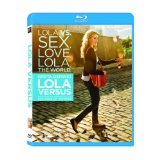 Being on this planet more than a few years, I can say I have had my share of relationships as well as those times when I felt like I was starting over. In that time I was able to reflect, I always felt like a new person, well at least temporarily. But every relationship helped me to refine my personality and build my character to the person I am today. As it turns out today, I get to review Lola Versus which takes us on a journey of self realization after a crushing breakup. Let’s see how it does.

We open up to a beach where Lola (played by Greta Gerwig)is performing various yoga exercises and over analyzing her horoscope which says that something will soon turn her life upside down but in the end it will only make her stronger. Her ears start ringing to a sound of a persistent noise blower. The next thing she knows she is waking up next to her boyfriend, Luke (played by Joel Kinnaman). It’s her birthday and she is turning twenty-nine.

Lola sends her boyfriend off to work. The following night, Luke decides to propose to her. She says yes and it spins into a wedding craze. There is a wedding dress fitting to attend with her friends, Henry and Alice (played by Hamish Linklater and Zoe Lister Jones), then it is the ordering of the wedding cake, and soon it is all of the little details that make us men absolutely loathe the practice. Soon, it proves too much for Luke as one day he decides to drop Lola like a bad habit.

The next thing we know, Lola is sleeping on the floor despite attempts by Alice to try and help her out. Even her father, Lenny (played by Bill Pullman) and her mother, Robin (played by Debra Winger) also try to help in their own quirky ways. Lola eventually decides to move back into her old apartment and one of her first visitors turns out to be her mutual friend (with Luke) Henry who brings along a consolation lasagna.

Lola decides to go to some bars but that does not go so well when she has panic attacks instead. As she leaves, she decides to hang out with Henry instead. They talk about their best worst night ever and the next morning they wake up arm in arm with their clothes still on. Meanwhile, Lola has to deal with picking up her stuff and fending off an advance from a guy named Nick (played by Ebon Moss-Bachrach) at a fish store. Lola tries to cope with life but she will need to find herself first.

The rest of the movie is dedicated to Lola and her little adventures in and out of love before she eventually finds herself. The most obvious issue however lies in the fact that Lola’s character is about as exciting and interesting as day old paint. It probably does not help that Greta Gerwig plays the character in a very condescending tone and rather than the audience feeling sorry for her, we actually tend to side with her friends more often than not.

The remaining characters while being slightly more agreeable with the audience are not exactly going to make us appreciate the movie very much more. Bill Pullman and Zoe Lister Jones are probably the only above average performances in the movie in my opinion. Everybody else seems to do their own versions of sleepwalking through the very meager eighty seven minutes of the film. Thankfully, this was a bit shorter than most films as I would have done my own sleepwalking without the walk bit.

The video is in 1.85:1 widescreen presentation at 1080p resolution. This is filmed in New York City, so as a result we do get to see a lot of on-location sites and less of inside set pieces. There are a lot of picturesque scenes and places where we can see a great deal of color. Detail is varied and while this might be NYC, if somebody told me Boston I would probably believe it. It probably does not help that the majority of the actors and actresses in the film emit this trendy hipster image which does nothing to accentuate the film’s video.

For the audio portion, we get a 5.1 English DTS-HD track (we also get a French 5.1 DTS, Spanish 5.1 Dolby Digital and English Descriptive Audio tracks). This movie is one hundred percent dialog driven and any sound effects that one would hope for are incredibly subdued. At the very least, the entire dialog is clear and easy to hear. The music is also pleasing but it is nothing I would listen to outside of the movie. It is a dull and depressingly average track. Subtitles are provided for English SDH, French and Spanish folks.

Would you believe that Orlando Bloom was originally slated to star in this film? Perhaps, you would also like to know that Joel Kinnaman (Luke) will be Robocop/Alex Murphy in the remake of the classic action film slated to hit theaters in summer of 2013. Those two facts alone are much more interesting than anything that this film has to offer. Trending hipsters, boring acting and a dull storyline make for a miserable eighty seven minutes. The truth is, if they made Lola’s character at least a little likable, I could have dealt with the rest of the shortcomings.

The disc for the fan of the movie is actually pretty darn good. The video and audio are reasonable and the extras are quite numerous (but unfortunately quite dull). If you have not figured it out by now, I am not recommending this movie to anybody. It tries way too hard to be a trendy and hippy type movie and even though it probably succeeds at that, it does not make me enjoy the movie at all unfortunately. But then, Lola is the kinda girl that most people should avoid. Really…should avoid.

Michael Durr has been reviewing movies for the better part of fifteen years now. He primarily enjoys thrillers, sci-fi, animation and even a little courtroom drama. His favorite films include Escape from New York, the Goonies and anything with Alyssa Milano. When he’s not praising Kurt Russell as the greatest actor of our time or scratching his head over a David Lynch flick, he’s spending time at home in Texas with his lovely wife, Lori and his amazing son. How they put up with him is a mystery, but even Basil Rathbone doesn’t have the time to solve that one.
Blue Bloods: The Second Season Juan of the Dead