Posted in: Disc Reviews by Gino Sassani on September 19th, 2012 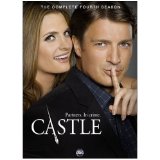 “There’s always a story. You just have to find it.”

What happens when you’re a popular murder-mystery writer and someone starts to use your stories and ideas to kill people in the real world? At first you become the prime suspect, particularly if you’re found to be completely self-centered and annoyingly arrogant. That’s where a pretty good alibi might come in handy. Is playing poker with the Mayor and the Chief of Police good enough? So, you’re no longer a suspect. Now what do you do? You sign on as a consultant for the special crimes squad of the police department, and you help catch the real killer. Only instead of looking for him O.J. style on golf courses and in steakhouses, you team up with the cops and nab that good-for-nothing plagiarist. The problem with that is you might just find that you like it. Even worse, it might end up curing that writer’s block you got after killing off your lead character and proverbial golden goose, much to the chagrin of your publisher who also happens to be your ex-wife. Follow any of that? If you did, you now have the setup for one of the better premiere series from last season, Castle.

Rick Castle (Fillion) is a very successful mystery pulp-fiction writer with over 26 books hitting the best seller list. He’s rich, and he’s spoiled. He lives with his mother (Sullivan) who is pretty much a has-been actress who thinks she’s just one part away from stardom. He has a young teen daughter (Quinn) who is more responsible than he is. She pushes away the sweets he serves for vegetables and grounds herself when she jumps a subway turnstile to get home. She’s definitely the adult in the family. After having so much fun and inspiration tracking down his fiction copycat killer, he decides to pull strings and become an unpaid consultant for the team. That’s not so good for team leader Detective Kate Beckett (Katic). While she might secretly find him a bit charming, she thinks he jeopardizes her cases. To her surprise and often irritation, he ends up providing valuable “out of the box” thinking and logic that more times than not leads to catching the bad guys. She is also secretly a fan whose life was literally saved once by his books. Of course, she’s not telling him any of that. The series has an interesting enough supporting cast, but make no mistake. These are the major players.

Nathan Fillion is one of those actors that are hard to pin down. He reminds me a lot of Bruce Campbell. He has a sudden disarming quality to him, even if he is not always the most likable guy in the show. Most fans will remember him as the fearless and cocky captain of the Serenity in Joss Whedon’s short-lived but critically loved Firefly series. He has that kind of charming smile and way about him that gets him out of a lot of trouble and makes you want to love him even as you hate him. And it is that love/hate relationship with Stana Katic that is the secret of this show’s quality and early success. For her own part, Katic is a marvelous actress who has only one thing going against her here. She looks and even sounds too much like Law & Order: SVU’s Mariska Hargitay. Katic is younger, but so was Hargitay when her show started. Too often Katic reminds me too much of, if not the actress, then the character from the other show. It doesn’t really matter though, because I promise you you’ll fall in love with these two characters and the show after only one episode.

When we last left the show at the end of season four, Castle had just saved Beckett’s life. She ends up with a bullet to the heart, but survives. Castle makes a deal with a shadowy figure on the phone and in dark parking garages to keep her safe. As long as she doesn’t investigate her mother’s death the “interested” parties will leave her be. Of course, he doesn’t share any of this with her, and it will come back to haunt them both before this season is over.

There are several themes this season. Of course, there’s the romance issue that they keep treading around. Thankfully, there is more to it than that. Alexis is getting ready to graduate from high school and looking at college choices. Her favorite is Stanford, but that’s going to leave Dad without someone to take care of him. There’s also a new captain in the precinct. You might remember that Montgomery turned out to be a bad guy, turned last minute good guy. Oh, and he also ended up dead. Captain Victoria Gates (Johnson) doesn’t have much use for Castle and does what she can to show her disdain. Still, the Mayor’s his buddy, and she’s stuck with him. That might be why she’s a little too happy when the Mayor ends up as a murder suspect this season. Just saying.

There’s a two-part episode that has Castle and the team responding to a terrorist threat. Jennifer Beals guest stars as a CIA agent who was Castle’s muse before Beckett. It also brings up the possibility that Castle’s father was a CIA spy. The thread is left hanging this season, but I suspect the show will be coming back to that one again in the future.

Two of the best episodes of the entire show come at the end of this season. Fillion’s Firefly buddy Adam Baldwin surfaces as a cop named Slaughter who loves to bend the rules. Castle is attracted to him and his case at first but finds he’s in way over his head. These guys have wonderful chemistry still, and I’d love to watch the show this episode represents. They’ve got to bring Slaughter back again soon.

The second super episode deals with a death that appears to be the work of a zombie. Fillion is like a grown kid, and you just gotta love it when he gets his cool on.

Each episode of Castle is presented in its original 1.78:1 aspect ratio. Even on DVD these newer shows are all starting to look, on the average, a lot better. With high-definition broadcasts and preparing for the Blu-ray market, the picture on these things is getting better. Colors and sharpness are all well above normal. But … you knew there had to be one. There’s still too much stuff on a disc. I continue to believe four episodes on a disc are too many. With discs themselves costing the industry almost nothing, I push for higher bit rates. Compression artifact, that’s the only enemy here, and it is nearly completely unnecessary.

The Dolby Digital 5.1 track is not really anything to write home about. This is a very dialog-heavy presentation, so you can expect everything to be front-loaded here. It’s all clean and clear.

Fillion And Friends – Castle Goes Radio: This series of features looks at Fillion’s association with the troupe of radio (okay, podcast) actors of Thrilling Adventure Hour. There’s a behind the scenes bit and a couple of the broadcasts. Click on the coffee cup for an extra performance.

Bowman, Bowman And Castle: (10:25) Unfortunately The Blue Butterfly is my least favorite episode of the season. This feature looks at father and son/director and editor team of Rob and Chuck Bowman who worked on the episode.

I know there are fans out there who eat up the whole “will they or won’t they” aspect of the show. If you’re one of those, there is an episode for you. I happen to think it bogs the whole thing down, and without giving away any spoilers, the relationship will by necessity change after this season’s final episode. “Now that’s not cool.”

Gino Sassani is a member of the Southeastern Film Critic's Association (SEFCA). He is a film and television critic based in Tampa, Florida. He's also the Senior Editor here at Upcomingdiscs. Gino started reviewing films in the early 1990's as a segment of his local television show Focus. He's an award-winning recording artist for Omega Records. Gino is currently working on his 8th album Merchants & Mercenaries. Gino took over Upcomingdiscs Dec 1, 2008. He works out of a home theater he calls The Reel World. Favorite films: The Godfather, The Godfather Part II, The Body Snatcher (Val Lewton film with Karloff and Lugosi, not the pod people film), Unforgiven, Gladiator, The Lion King, Jaws, Son Of Frankenstein, The Good, The Bad And The Ugly, and Monsters, Inc.
Juan of the Dead Etta James: Live at Montreux 1993 (Blu-ray)