Ghosts of the Abyss (Blu-ray 3D)

Posted in: Disc Reviews by Archive Authors on September 21st, 2012 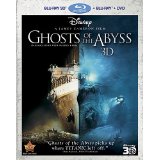 Bill Paxton accompanies James Cameron on another expedition to the Titanic, and narrates this documentary about their exploration of the ship. Though the narration is hobbled by an endless stream of pseudo-profundities, the underwater photography is simply stunning. Thanks to two remote-controlled robots, we get to see the interior of the ship. Computer animation and superimposed extras (the ghosts of the title) both re-create the ship as it once was, and help us visualize where…we are in the wreckage, and what transpired there.

The film comes in two different versions: the 60-minute theatrical version and a 90-minute extended feature. The latter is “significantly modified” from its original form, we are told, and this is true. Some of the sequences go on at greater length: we see where some wood paneling once was, for instance, and we spend a lot longer seeing what life is like aboard the Russian ship Keldysh. Some sequences are entirely new to the extended version, such as a section on the animal life that exists in and around the wreck. The most visible change involves the extensive use of split-screen and frames-within-frames that characterize the theatrical release. The multiple frames have been almost completely eliminated, so every shot of the ship now takes up the entire screen.

The picture is purely spectacular. Every detail of the sunken wreck seems to come alive as Cameron’s innovative cameras join him on the dangerous dives two and a half miles into the darkest deep. The surface footage is bright, crisp, and revelatory of the research and development that went into his pet project, made possible the success of 1997’s Titanic. But the undersea imagery steals the show. It’s a spellbinding adventure, lovingly detailed and brilliantly accomplished. Not even fiction films can boast better 3D quality, and you’ll find yourself holding your breath as Bill Paxton becomes our eyes and our emotional guide into the deep. When he gets seasick, we grab our gut.

The audio is as expertly accomplished as the video. Cameron’s sound mixers somehow impart the sense of loneliness that surrounds a small submersible floating among the 1912 wreckage. The awe and sadness of the tragedy are reflected in a subdued but vital soundtrack. A giant splash of entering the water sounds like an invitation into doom, and the rumbling subwoofer keeps you on edge — Cameron and Paxton seem genuinely unsure whether they will succeed or even survive. We’re talking a wonderful DTS-HD Master Audio at a bit rate of nearly 4 mbps.

The Blu-ray offers both the 60-minute and extended 90-minute version.

“Reflections from the Deep” is a 6-part featurette, running just over half an hour. Though it does provide some interesting background on how the film was made, its promotional function is all too obvious, and is finally of limited use. More fun is “The MRI Experience,” a multi-angle feature that allows you to toggle cameras during one of the exploratory dives.

When James Cameron made it a decade ago, Ghosts of the Abyss was a pioneering piece of theatrical 3D documentary wizardry. Today, as the three-dimensional technology slides into the home theater market, it stands as a masterful display of the format’s potential. Even if you saw it in theaters, the home video version is an all-encompassing marvel. The picture is purely spectacular. Every detail of the sunken wreck seems to come alive as Cameron’s innovative cameras join him on the dangerous dives two and a half miles into the darkest deep. Whether you are curious about the great ship’s fate or you simply want to experience an astonishing triumph of artistic technology, these Ghosts will haunt you as much as they did the filmmakers themselves.