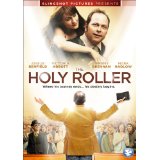 Look, I don’t take pleasure in being the guy who slams a religious movie. It’s not that I’m afraid I’ll go to hell. (If someone can go to hell for writing a scathing movie review, then the system is broken.) I just don’t particularly enjoy tearing down any well-meaning movie with a positive message. However, when a film is as thoroughly inept as The Holy Roller, I’m afraid I have no choice.

The New Zealand dramedy follows Pastor Luke (Angus Benfield) who leaves his modest countryside congregation — although calling one person a “congregation” might be too generous — in favor of the big city because he wants to witness a miracle. (The Holy Roller was filmed in Christchurch, the country’s third largest urban area, right before a series of severe earthquakes in 2010 and 2011.)

Once he arrives in the city, Pastor Luke wanders into Temple, a bar/nightclub run by shady Simon (Jeremy Brennan). Simon has been given three months to pay off a gambling debt to a local crime boss, so he suggests turning Temple into a church. Pastor Luke has a place to preach, but he also has no idea Simon is pocketing the offerings. To be fair, Pastor Luke is distracted by Simon’s sister Kate (Victoria Abbott), a lovely aspiring musician. As the church (and Pastor Luke) becomes flashier and more successful, he loses sight of his original mission.

Meanwhile, The Holy Roller loses sight of its mission by mixing in quirky characters who tonally undercut the movie’s more serious parts, and jamming in every cliché in the book.

When Pastor Luke arrives in the Big Bad City, for example, he is immediately mugged at knifepoint, which is a turn of events that might’ve seemed fresh about 25 years ago when it happened to Crocodile Dundee. As Kate is singing during Pastor Luke’s first service, a record exec (Robert Faith) just happens to be walking by Temple. You’re not going to believe this, but it turns out the record exec is greedy and kind of evil. He tries to turn Kate into a cookie-cutter pop star and turns her life upside down.

The parts of the film when Pastor Luke starts believing his own hype work pretty well, but the story gets out of hand once the mob gets involved and the crime boss offers Luke a job. It’s just one in a series of unbelievable, movie-ish plot points that undermine The Holy Roller’s genuine, heartfelt moments.

Benfield — who also produced and co-wrote the film — certainly looks the part of the underdog, but he doesn’t possess much presence as an actor. He’s likable, but not exactly charismatic. As a result, his transformation into somewhat of a superstar isn’t very believable. Abbott (a dead ringer for fellow Kiwi Melanie Lynskey) has an earthy charm, but appears to have been cast more for her musical talents than acting ability. Brennan gives a nice, oily performance as the scheming Simon. However, his character is underdeveloped and somewhat marginalized in favor of giving screen time to a blunt, wheelchair-bound friend of Pastor Luke’s (Mark Hadlow) and the unnecessary mobster (Ron Rodger).

The Holy Roller isn’t aggressively awful, although the comically happy ending made me guffaw from its ridiculousness. The movie actually contains a few amusing moments. Unfortunately, it’s neither funny nor affecting enough to recommend as either a comedy or a drama. The movie’s message deserved a better vessel.