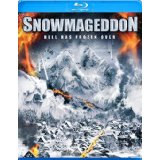 People make fun of us Floridians for a variety of reasons. (Some of them don’t even involve our performance in presidential elections.) One of the most popular ways out-of-staters in the northern part of the country — as well as our Canadian readers — mock us is by chuckling whenever we dash to our closets and dust off our winter wear as soon as the weather dips below 60 degrees. So I can’t even imagine how we’d handle a full-blown Snowmageddon!

Snowmageddon is the latest disaster — in every sense of the word — courtesy of SyFy Original films, which has already brightened countless Saturday nights with tastefully-titled flicks like Stonehenge Apocalypse, Piranhaconda and Snipers vs. Vipers. (Have fun figuring out which one of those I made up. No Googling allowed!)

It’s Christmas Eve in Normal, Alaska and a mysterious stranger leaves a present for the kindly Miller family. (And no, the stranger was not jolly and he did not have a bright red suit.) There’s small-town sheriff John (David Cubitt), his helicopter pilot wife Beth (Laura Harris) and their two kids, sarcastic teen Jennifer (Magda Apanowicz) and dorky Rudy (Dylan Matzke). Rudy opens the present and discovers an ornate snow globe containing a miniature version of Normal.

Unfortunately, the snow globe is soon revealed to be a cursed artifact that makes horrible things happen once it’s activated. (So basically, it’s like any other snow globe.) We’re talking earthquakes, ice meteors and volcanoes. Was it wrong of me to expect a lot more, um, snow during a Snowmageddon? By the way, don’t bother getting invested in the origins of the snow globe or the identity of the stranger who delivered it because the movie doesn’t really address either of those mysteries.

Look, I realize none of us plop down to watch a SyFy Original film to see tight plotting. I don’t know about you, but when I sit down to watch one of these movies I want to see laughably bad acting and a stupid-looking creature brought to life by worse visual effects. So while Snowmageddon is undeniably a bad movie, I’m bummed to say that it’s also just competent enough to be completely uninteresting.

I mean, where’s the cat fight between two has-beens from the ‘80s? Where’s Eric Roberts?! The people behind Snowmageddon appear to have a healthy sense of humor about this project: I mean, the plot revolves around an evil snow globe and the film’s tagline is, “Hell has frozen over.” However, once the mayhem starts everyone plays things completely straight as we’re taken from one perilous situation involving a character we don’t care about to another.

There’s simply nothing new to see here: the initially bratty teenager becomes less bratty by the end credits, none of the adults believe the little boy who knows what’s happening, and I’m pretty sure the only black guy in town got killed first. Cubitt and Harris are solid (if a little stiff) as the Concerned Parents. I was actually more impressed by Apanowicz and the way she slowly transitioned Jennifer out of Bratty Teenager-dom, as well as her connection with a dashing snowboarder (Jeffrey Ballard). Michael Hogan (Battlestar Galactica) also appears as a gentle antiques shop owner who I was convinced had some sort of connection to the globe, but it turns out I was WAY overthinking this movie.

And if that wasn’t bad enough, the film’s abrupt ending had the guts to hint at a sequel. (Although, I weirdly admired that delusional move.) In the end, Snowmageddon is actually not a completely terrible movie…and that’s precisely the problem for those of us hungry for SyFy’s brand of cheese.

Snowmaggedon is presented in an aspect ratio of 1.78:1. The 1080p image is arrived at with an AVC MPEG-4 codec at an average of 28 mbps. Overall, the video presentation is pretty decent when you consider the limited production values involved. I do wish the colors had popped a bit more and that the image was a little more vibrant since the film features so much outdoor scenery. I also saw some soft spots and a few instances of aliasing. Indoor scenes, on the other hand, look quite good and feature an impressive amount of detail and texture, particularly in characters’ faces and clothing. Black levels — very important during the opening act — are adequate, but could’ve gone deeper. Ultimately, this comes up just short of being quite a good Blu-ray transfer.

The Dolby TrueHD 5.1 track occasionally muffled the dialogue, but let’s be honest: who cares about the dialogue in a movie called Snowmageddon? Though jingle bells and Christmas music dominate the track early on, the real fun is supposed to begin once disaster strikes. I was actually a bit underwhelmed by the action scenes. Here I was expecting to have to turn my volume way down to avoid a noise complaint, but the disaster sequences showcased very little bass and didn’t even come close to threatening to blow out my speakers (or earn me an angry knock at the door). At least there’s a surprisingly good amount of immersion — whooshing wind, thunder in the distance — poking out of the rear speakers throughout the film.

Snowmageddon won’t be joining the pantheon of “great” SyFy Original films, and it certainly won’t be joining It’s a Wonderful Life, A Christmas Story or Die Hard on anyone’s must-watch list during the holidays. At least the film taught us a very important lesson: snow globes are evil and not to be trusted.