Trouble With the Curve (Blu-ray)

Posted in: Disc Reviews by Gino Sassani on December 18th, 2012 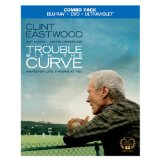 I’m a Minnesota Vikings football fan. Yes, I accept the condolences. However, I didn’t say that to get sympathy, and I’m not yet in need of the services of the suicide hotline. With two games to go, I will keep the number on speed dial, just in case. A thousand years ago we had a star player who made the by now infamous statement that he plays when he wants to play. For a young athlete with an already troubled past, it didn’t go over too well. But over the last decade or so Clint Eastwood appears to be in that same mindset. He acts when he wants to. He’s only appeared in three films in the last ten years. The difference is that Clint has earned the right to be picky about when he works. He isn’t taking a paycheck when he isn’t working, and when others depend on him to hit it out of the park, he rarely misses the ball. Trouble With The Curve won’t ever rival Eastwood’s other roles for action, intensity, or even one-liners, but it’s a solid performance in every way. For all of those Eastwood critics in the glory days who said he couldn’t pull off a performance without the trappings of Dirty Harry or The Man With No Name, I suspect you’re having a hearty meal eating those words after seeing Trouble With The Curve. It’s perhaps his simplest role yet. It also happens to be a home run.

Gus (Eastwood) has been a scout for baseball’s Atlanta Braves for 40 years. He’s responsible for the team’s greatest talents going back to Dusty Baker. Now he’s in his 80’s. New, younger blood has invaded the world of scouting, and they’ve brought along all of their latest computer toys to do the job. Gus won’t adapt to that new technological world. He can tell a hitter’s talent by the sound of the ball leaving the bat or the sound of the batter’s hands as he gets ready to swing. That’s a good thing, because Gus is losing his eyesight. He trips over tables and chairs (enter your own RNC joke here) and isn’t the safest person behind the wheel of his car. His old friend and head of scouting for the team is Pete (Goodman). He’s still behind Gus, but the pressure is on. There are only three months left on Gus’s contract, and the draft is approaching. Gus has one scouting trip to prove he’s still got it, or he’s going to be put out to pasture by owner Vince (Patrick).

Enter daughter Mickey (Adams), named for the baseball player and not the mouse. She’s a successful lawyer on partner track at her prestigious firm. In fact, if she does well on her upcoming case, she’s in. Pete tells her about Gus’s situation, and she decides to take time off and help her father with the scouting trip. Okay, she doesn’t exactly take off. She takes off like my wife does, with cell phone and computer in tow to work on the case in her spare time. On the road she meets Johnny “The Flame” (Timberlake), a young pitcher whom her father had scouted and signed. His career was cut short because the short-sighted team burned him out. Now he sees this scouting trip for Boston as a pathway to the announcing booth. It’s an odd relationship. He feels grateful for Gus and genuinely loves him, but they are also rivals scouting the same player for their team’s pick. He also falls for Mickey.

The film is essentially a warmhearted road film where the underdog proves that he still has what it takes to do the job. Of course, it’s all entirely predictable, but that’s not necessarily a bad thing. It all boils down to the performances, and Clint’s still got it. He builds almost instant chemistry with Amy Adams as his estranged daughter. Good actors bring out the best in others, if they let it happen. Fortunately for this film everyone is at the top of their game. Amy Adams is wonderfully convincing as the baseball fan lawyer who’s not sure her own life is on the right path. Even Justin Timberlake steps up his game as Johnny. He’s reserved here and is also quite convincing. John Goodman has never been better and is a bit underused as Pete. Goodman just looks and talks like a guy who has been in baseball for decades. He was a perfect casting decision. Of course, Clint himself is brilliant here. At 82 he’s no stranger to the limitations of growing old, but he sure knows how to play the graceless old man. We saw this guy in Gran Torino, and he’s here again, but without so much of a gruff exterior. This character’s frustrations are aimed inward.

Clint rarely works with directors he doesn’t have history with. He made an exception for Robert Lorenz. Clint’s not such a shabby director himself, and he knows how to spot talent. Lorenz turns what could have been a snore-fest into a compelling and emotional drama. He picked the right people and knew enough to let them do what they do best. The greatest directors know when to stay out of the way. Lorenz does just that. His camera choices never call attention to style over substance. He’s interested in capturing what’s playing out in front of the camera. The end result is warmth that’s never gushy and authenticity that doesn’t have to be harsh.

Trouble With The Curve is presented in its original aspect ratio of 2.40:1. The 1080p image is arrived at with an AVC MPEG-4 codec at an average 30 mbps. This is a very ordinary high definition image presentation. Focus is often soft, and I suspect Clint likes it that way these days. Colors are natural if a little on the drab side. The best examples of color come from the green baseball fields. I actually would have liked to see more grain here as the image looks a little off without it. Black levels are average. There’s nothing exactly wrong with this one, there’s just nothing outstanding going on either.

The DTS-HD Master Audio 5.1 is pretty much there to serve the dialog. There is an occasional ping of an aluminum bat in the surrounds. The score is subtle, and you will hear the dialog just fine.

Rising Through The Ranks: (4:37) This is Lorenz’s first feature as a director, but he has a long history with Clint. The two talk about that history and giving him the reins on this one.

For The Love Of The Game: (6:02) This one is a profile of Adams and Timberlake. They talk about how easy the roles fit them and the usual fun of working together.

No surprises here, but you’ll walk away feeling satisfied, I promise you that. So, for all the critics back in the 1970’s who saw Clint Eastwood as a one-trick pony, what have you to say now? “That’s what I’ve been trying to teach you about versatility.”

Gino Sassani is a member of the Southeastern Film Critic's Association (SEFCA). He is a film and television critic based in Tampa, Florida. He's also the Senior Editor here at Upcomingdiscs. Gino started reviewing films in the early 1990's as a segment of his local television show Focus. He's an award-winning recording artist for Omega Records. Gino is currently working on his 8th album Merchants & Mercenaries. Gino took over Upcomingdiscs Dec 1, 2008. He works out of a home theater he calls The Reel World. Favorite films: The Godfather, The Godfather Part II, The Body Snatcher (Val Lewton film with Karloff and Lugosi, not the pod people film), Unforgiven, Gladiator, The Lion King, Jaws, Son Of Frankenstein, The Good, The Bad And The Ugly, and Monsters, Inc.
Silent Night (Blu-ray) Tosh.O – Deep V’s