Posted in: Disc Reviews by Jonathan Foster on January 3rd, 2013 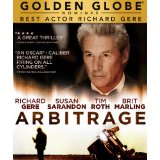 In the financial world, the term “arbitrage” refers to the possibility of risk-free profit at zero cost. This seems to be the goal for Robert Miller (Richard Gere), a hedge fund manager desperate to sell his business and retire. The reason for his desperation is that his business is completely broke due to a bad investment. This goal has completely consumed Robert, and it affects everything he does. Robert treats his employees like slaves, is nervous around his family, and regards his mistress as little more than a plaything. One night after the sale suffers yet another setback, he convinces his mistress to come with him to his country cabin. While driving her car, he falls asleep at the wheel and has an accident. Now he has something else to cover up. From then on, there’s nothing he won’t do — no lie he won’t tell, no depth he won’t sink to — in order to keep his secrets and keep his family in the dark.

Arbitrage turned out to be a lot better than I thought it would be. Gere takes what could easily be a static evil character and really fleshes it out. We may not like the things he does when his world starts falling apart, but we understand and almost — ALMOST — sympathize with him.

Every criminal needs someone chasing him, and Tim Roth fits that role like a glove, making an excellent foil to Gere as Detective Bryer. Detective Bryer is a bulldog, chasing after Miller with Inspector Javert-like tenacity. Roth and Gere play off each other brilliantly, and every scene they have together is tense and exciting. Newcomer Brit Marling really shines as Miller’s daughter and second in command at his company. The sequence where she figures out the company is broke is outstanding.

My only criticism (and I’m probably nit-picking) is that Oscar winner Susan Sarandon — who plays Miller’s wife Ellen — is underused. Sarandon is a very good actress and Ellen could have been a strong supporting character, but she’s not given enough screen time to develop. Ellen seems to be used merely as a plot complication whenever it’s convenient.

On the whole, this is a well-acted tale of how mistakes can snowball if you try to cover them up.

Arbitrage is shown with an aspect ratio of 1.78:1 with a 1080p image. The image is achieved with an AVC MPEG -4 codec at an average of 30 mbps. The film really shows off contrasts well, with Miller’s house and office being brightly lit and open, while his secret affairs are all conducted in dark and shadowy places. Overall, Arbitrage looks really good, but there are a few scenes in the dark where it’s hard to see what Miller is doing and I was a temporarily confused. (Although I suspect this may have been intentional on the director’s part, and the black levels were just doing their job.)

The DTS-HD Master Audio 5.1 track works well for this film. Every word and sound is completely audible, with no need for subtitles. There’s not much music, but it fits in beautifully when it occurs. It actually sneaks up on you, building slowly before exploding out of the speakers. Like the video, there’s a nice contrast, with sweet soft music playing during the parts of his life at home and heavy, loud, tense music during his desperate moments. The score during and after the car crash is my favorite.

Commentary with writer/director Nicholas Jarecki: Jarecki talks about what it was like to make the film and provides some interesting tidbits about certain scenes, but sometimes gives away spoilers during the commentary. So make sure to watch only after you’ve seen the movie.

A Glimpse into Arbitrage (12:22): The cast and crew talk about making of the film, their characters and working with each other.

Who is Robert Miller? (7:02): The actors and filmmaker talk about creating the character of Robert Miller and what they feel his motivations are.

This could have easily been a typical tale of a corrupt Wall Street shark, but it’s not. There’s a depth and humanity to the character of Robert Miller that makes this film very compelling. This movie is well worth your time and money.