Contest: Win Interview With a Hitman On Blu-ray From Well Go USA 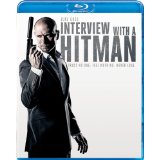 Our friends over at Well Go USA have given us three copies of Interview With A Hitman on Blu-ray to give away. “Trust no one. Feel nothing. Never lose. This is Viktor’s (Luke Goss) code. This mantra took him from the slums of Romania to the pinnacle of his profession – as a murderer for hire. Viktor knows the value of life more than most, which makes him the perfect killer. But after a ruthless betrayal by his bosses, he escapes to London, joins a new “family,” and finds himself caught in a vicious underworld power struggle. Viktor is now better, faster and more ruthless than ever before, but an encounter with a dark beauty offers him a chance at new life. But can he ever hope to escape the ghosts – and buried secrets – of his past? ”  3 lucky winners will get in on all of the excitement.

Gino Sassani is a member of the Southeastern Film Critic's Association (SEFCA). He is a film and television critic based in Tampa, Florida. He's also the Senior Editor here at Upcomingdiscs. Gino started reviewing films in the early 1990's as a segment of his local television show Focus. He's an award-winning recording artist for Omega Records. Gino is currently working on his 8th album Merchants & Mercenaries. Gino took over Upcomingdiscs Dec 1, 2008. He works out of a home theater he calls The Reel World. Favorite films: The Godfather, The Godfather Part II, The Body Snatcher (Val Lewton film with Karloff and Lugosi, not the pod people film), Unforgiven, Gladiator, The Lion King, Jaws, Son Of Frankenstein, The Good, The Bad And The Ugly, and Monsters, Inc.
Undefeated (Blu-ray) Gossip Girl: The Complete Sixth and Final Season