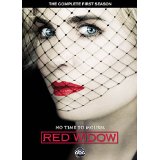 There’s a case to be made that it isn’t exactly fair to review a television series that was axed after only 8 episodes. Fans of that kind of a show are already up and arms and just waiting to thrash you for, as they see it, putting another nail in the coffin while they’re still looking for extraordinary measures to revive the corpse. It doesn’t matter how long it’s been dead or how slim the chances are for revival. If it’s your show you just aren’t ready to give up, and you certainly don’t need a word jockey like me throwing dirt on the grave. When it comes to Red Widow, however, I think I’ve seen enough to make the official pronouncement of death.

Description of Decedent: Red Widow was based on the Dutch television series Penoza.

Medical History: Marta Walraven (Mitchell) is having a bad day. Her husband Evan (Mount) was gunned down in their driveway in front of his very young son. As if that wasn’t bad enough, she discovers that his crew was involved in the rip-off of a huge drug shipment from one Nicholae Schiller (Visnjic). Schiller is a very scary guy, and if he can’t have the drugs or their value in cash back he’s going to extract a price one way or another. Of course, we know that it wasn’t poor Evan at all who took the stash. It was his two partners Irwin (Traval) who is also Marta’s brother and Mike (Tergesen). Evan actually didn’t want any part of the deal. In fact, he was about to sell out his wife’s family (did I mention they were Russian mobsters?) to get himself and his family out of his life of crime. Now Marta takes over the drug smuggling business her husband and partners ran, and she’s also working with Schiller to try to pay off the debt she still thinks belongs to her dead hubby. With me so far?

All the while the feds are trying to make a case against….well, anyone, really. They want Schiller or any of the other various criminals in this tale. That could be Andrei (Serbedzija), Marta’s father and patriarch of the Russian mob family. There’s his trusted confidant and bodyguard Luther, played by Luke Goss. The fed in charge of the investigation is Ramos (Collins, Jr.) who is also dealing with a junkie wife and having an affair with Marta’s sister Kat (Newman). Then there are Marta’s children, young Boris (Salvati), son Gabriel (Beaumon) and adolescent Natalie (Moriarty) who have different ways of dealing with the loss and disruption to their lives.

Cause Of Death: Self-inflicted wounds

Distinguishing Characteristics: The cast does as much as they can with the convoluted plot, but it’s absolutely hopeless in the end. Luke Goss is the star power here, and he gives us a strong presence when he’s on camera, but he’s surrounded by walking and talking clichés. Andrei can’t help but appear as a Marlon Brando reject as he tries to appear the strong Don type with an empire that doesn’t appear to really exist. It’s as if he’s merely play-acting as a big shot mob guy. Gabriel wants to be Michael Corelone, only without the acting chops. Marta is never believable, and that’s where it all falls apart. She certainly doesn’t look or act Russian. She is always in over her head and manages to survive by plot creaks that are better suited to 1960’s comic book escapes. Plus there’s the fact that she plays this betrayed wife when she knew all along her husband’s business was drug smuggling and she grew up in a supposedly pivotal mob family. She gives off this whining look that makes you want to reach across the screen and slap her silly. It’s all rather ridiculous, really, and the actors are trapped inside of paper characters they can’t really escape. Now that’s the real crime.

Medical Examiner’s Comments: Red Widow never stood a chance. The show attempts to be a super-complicated mystery that isn’t all that mysterious. It’s hard to find a character worth rooting for here. The most sympathetic character gets killed in the pilot. After a couple of more episodes we kind of feel like he’s better off dead than living out this life. To make matters worse, the show strolls at an agonizingly slow pace. With all of these characters and subplots, the show finds plenty of time to stop and smell the roses. There was no sense of urgency in the pacing, but the writers obviously knew they were in trouble as they invoked just about every conceivable cliché to try and keep us interested. Obviously, that didn’t work out at all.

Fortunately for us all, next of kin ABC did the right thing and took Red Widow off life support. By pulling the plug they have given us immeasurable hours of potential enjoyment watching something else…like grass growing. They at least put me out of my misery. The release includes some deleted scenes, bloopers, and a behind-the-scenes feature that makes it even more obvious that these guys didn’t have a clue. “There’s only one thing I dislike more than someone who steals from me—and that’s someone who wastes my time.”

Gino Sassani is a member of the Southeastern Film Critic's Association (SEFCA). He is a film and television critic based in Tampa, Florida. He's also the Senior Editor here at Upcomingdiscs. Gino started reviewing films in the early 1990's as a segment of his local television show Focus. He's an award-winning recording artist for Omega Records. Gino is currently working on his 8th album Merchants & Mercenaries. Gino took over Upcomingdiscs Dec 1, 2008. He works out of a home theater he calls The Reel World. Favorite films: The Godfather, The Godfather Part II, The Body Snatcher (Val Lewton film with Karloff and Lugosi, not the pod people film), Unforgiven, Gladiator, The Lion King, Jaws, Son Of Frankenstein, The Good, The Bad And The Ugly, and Monsters, Inc.
Upcomingdiscs Attends Attorney At Low Premiere The ABCs of Death (Blu-ray)