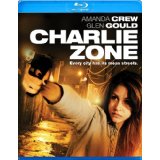 Enigma: something hard to explain or understand: well, that about sums up Charlie Zone. The story itself is mildly interesting but takes its time building traction. I was expecting to be introduced to a film about underground fighting and instead was introduced to a film about two people who were dealt a bad hand and are thrust into a life-or-death situation. At odds at first, the two must work together in order to survive. Does this plot theme sound familiar to anyone else?

Paul Avery (Glen Gould, Cashing In) was once an up-and-coming boxer from the Indian Reservation. He was thought to have a real chance at a pro career until he got caught up in a smuggling racket and served four years in prison. After losing his boxing license as well as four years of his life, Paul now struggles to make ends meet and has turned to participating in recorded internet street fighting for extra cash.

After a fight where he pummels his opponent, Paul receives a card hinting at a potential opportunity to make a significant amount of money. The next day he is approached by a woman representing a family whose daughter Jan (Amanda Crew, Charlie St. Cloud) ran away years earlier. Since leaving home, Jan has fallen into the seedy underworld of drugs. Paul is offered $20,000 to retrieve her from the grips of her dealer boyfriend and return her to her parents, a job he reluctantly agrees to.

Things aren’t what they seem, however, because shortly after he completes the job, he discovers that he has essentially just painted a target on his back. Hunted by Jan’s dealer boyfriend, a biker gang, and the people who hired him, Paul struggles to stay alive and one step ahead as he tries to find a way out of the situation that he has been stumbled into.

Some good movies and television shows have been coming out of Canada in recent years; this is not one of them. The film has appeal in the beginning, engaging the audience with an action scene at the opening, but overall the film tends to drag and is uninteresting. There’s a mystery surrounding the character Jan meant to keep you engaged, but the truth takes too long come out, and when it is revealed it’s underwhelming and not worth all the intrigue that was put into it.

The actors aren’t bad, but their performances aren’t really something worth writing home about. There are a few familiar faces like Cindy Sampson for the Supernatural fans and Falling Skies Mpho Koaho. Koaho does manage to make his performance during his character’s brief onscreen moments. Sampson, on the other hand, chances her time onscreen will come and go before you have time to realize where you recognize her from.

Charlie Zone is presented in an aspect ratio of 1.78:1. The 1080p image is arrived at with an AVC MPEG-4 codec at an average of 25 mbps. From the very beginning the overall picture quality took me by surprise; I was not expecting such a clear and crisp picture. Lots of detail too, I was able to see the sheen of sweat on the actor’s forehead. The film’s coloring was top-shelf; the use of orange for the street lights during the opening scene made the scene. The significant aspect was the blood; the redness of it really popped and stood out.

The Dolby TrueHD 5.1 audio is fitting for the film. For this film, emphasis was placed for on the dialog rather than musical score. Truth be told, I barely even remember the score at all. As far as the dialog is concerned, no straining to hear required; the audio is very clear and well balanced. The sound isn’t immersive, but it’s still good enough.

There were no Special Features included on this disc.

With Charlie Zone, I think the production team should have adhered to the principle of “less is more.” Too much work went into maintaining the Jan’s secret so that ultimately you lose interest before the secret is even revealed. That was the other problem, they waited too long to reveal the truth, and the secret that they were hiding turned out to be something that has been seen many times in previous films, making it not worth all the intrigue. The story would have played out better if they revealed the truth towards the middle instead the end; by the time you learn the truth, you are more than an hour into the movie.

Jeremy Butler is a film school graduate of the International Academy of Design and Technology. He is been writing for Upcomingdiscs since 2012; however, movies have played a big part of his life for much longer. Favorite genres include horror, science fiction/fantasy, and comedy. Favorite movies are V for Vendetta, Boondocks Saints, Kiss Kiss Bang Bang, and The Godfather.
12 Rounds 2: Reloaded (Blu-ray) Contest: Win Saving Lincoln From Pictures From the Fringe