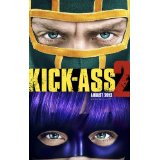 “There’s no room for punks in suits. Just real heroes who can really kick ass.”

You’ve heard me say many times in these pages that expectations kill. It’s a rule I’ve found to be pretty solid when it comes to sequels. Like all good rules, there are exceptions. When it comes to Kick-Ass 2 it’s the lack of expectations that will kill your enjoyment of the film. If you don’t understand going in what to expect, you will more than likely hate this movie. If you already have a good idea what is going on here, be prepared to have a rip-roarin’ time of your life.

As I left the screening for Kick-Ass 2 there were two very distinct kinds of reactions. There were the adrenaline-fueled and quite rowdy accolades, and then there was the “what the F@#$ did I just see?” The best way to find yourself in the first group is to have seen the first movie. Amp up the violence for violence’s sake and potty-up the potty mouth, and you have the perfect formula for a brilliant sequel. If those things offend you easily, I should point out that The Smurfs 2 is still playing, and judging by the current box office numbers you shouldn’t have too much of a problem getting good seats.

For the rest of you, welcome back to the world of Kick-Ass. It’s been some time since the events of the first film. Dave Lizewski (Johnson) has stayed pretty much out of costume as Kick-Ass. He trains a little with Mindy aka Hit Girl (Moretz), but his earlier actions have inspired a wave of people to don costumes and become real-life superheroes. That fact is a bit of a thorn in the side for one Chris D’Amico (Mintz-Plasse) who holds a grudge against Kick-Ass for accidentally killing his father. Of course he reminds us that you can’t accidentally kill someone with a bazooka. That aside, he is working up a pretty sweet revenge and villain origin story. It all comes together when he “accidentally” kills his own mother. Now he has the cash and angst to go full blown with his super-villain persona. Gone is Red Mist. Enter Mother F@#$%!. With the help of his faithful side-kick/servant/lackey Javier (Leguizamo) he recruits an army of super-villains to build a villain empire. They start out on a huge crime spree with an ultimate goal of taking out Kick-Ass.

Mindy, on the other hand, is trying to blend in with the other girls of her school and keep a promise to her new guardian Detective Marcus Williams (Chestnut). As hard as she tries, she just can’t fit in. When her friends turn on her, she decides it’s time to bring Hit Girl back.

Her timing couldn’t be better. Kick-Ass has joined a new group of heroes led by Colonel Stars and Stripes (Carrey). They include a husband and wife team who lost their son, Dr. Gravity (Faison) who sports a baseball bat with lights that he envisions as an anti-gravity weapon, Battle Guy (Duke) who turns out to be his geeky friend Marty with a made up origin story and Night Bitch (Booth) who turns into a potential love interest for Kick-Ass. The new legion of bad guys includes The Tumor (Nyman), Mother Russia (Kurkulina), Black Death (Kaluuya) and maybe Dave’s friend Todd (Prew) as the derivative Asskicker. What follows can only be described as a raunchy romp that disassembles the Avengers-styled superhero film like we’ve never seen before. Okay, we kind of saw it before in the original film. But Kick-Ass was never like this.

Jeff Wadlow takes over the writing and directing chores for this outing. The first thing that I thought I would miss was Matthew Vaughn at the helm. The first film was such an original and clever product that it’s a little scary to see someone take over. But Wadlow did something Vaughn might not have been able to do. Kick-Ass 2 takes the absurdity, violence and vulgarity and sends it up into the stratosphere. And he does it without it appearing so much that he was just throwing stuff up against the wall to get a reaction. That’s probably exactly what he did do. It just doesn’t look that way. He managed to take the concept and throw away the formula and still give the audience exactly what they were looking for. Unless, of course, you were indeed looking for something else. In that case, may I recommend Disney’s Planes? You might catch Jim Carrey there, who had a sudden bout of conscience recently and decried the violence in films like Kick-Ass 2. He eventually calmed down and expressed some new-found delight in the just-for-fun violence. I suspect someone showed him a line in his contract. Can anyone say Marlon Brando?

The biggest disadvantage Wadlow has was the inability to shock anyone, really. Once we’ve seen 9-year-old Moretz kicking serious butt and dropping enough F bombs to make Samuel Jackson blush, where else can you go? Still, gauging from the audience reaction he managed to do just that. I would not have thought it possible, but this one still has the ability to shock. I’m sure you likely figured out that the Chris bad guy isn’t really named Mother F@#$%!. I mean, how the heck would you pronounce it? It shouldn’t take too much imagination to figure out what he really calls himself, over and over and over again. Add to that the complete absurdity of his character and the circumstances here, and I’m happy (I think) to say I still have the ability to be shocked. All in fun, of course. This is a family site, and Kick-Ass 2 is anything but a family film. Don’t get me wrong, I love family films. You might have noticed Despicable Me 2 is now showing. But from time to time everybody needs a little release or guilty pleasure. Kick-Ass 2 is that and a little bit more. It’s the more that separates this from the raunchy tripe that I’ve seen at least 20 times a year. Check out the more. “If you don’t want to, don’t. You don’t have to. Ready to go again?”

Gino Sassani is a member of the Southeastern Film Critic's Association (SEFCA). He is a film and television critic based in Tampa, Florida. He's also the Senior Editor here at Upcomingdiscs. Gino started reviewing films in the early 1990's as a segment of his local television show Focus. He's an award-winning recording artist for Omega Records. Gino is currently working on his 8th album Merchants & Mercenaries. Gino took over Upcomingdiscs Dec 1, 2008. He works out of a home theater he calls The Reel World. Favorite films: The Godfather, The Godfather Part II, The Body Snatcher (Val Lewton film with Karloff and Lugosi, not the pod people film), Unforgiven, Gladiator, The Lion King, Jaws, Son Of Frankenstein, The Good, The Bad And The Ugly, and Monsters, Inc.
Robin Hood: 40th Anniversary Edition (Blu-ray) Family Ties: The Seventh and Final Season