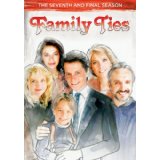 Best known as the launch point for Michael J Fox’s career (along with a major booster from the Back to the Future films), Family Ties was a decently delightful series that may now be mostly remembered via the many references placed into Family Guy (creator Seth MacFarlane has noted it as one of his all time favourites). It has been previously covered very well on this site, which can be found at this link: http://upcomingdiscs.com/?s=family+ties

In this, its final season, we see a number of major events occurring inside and outside the Keaton Family. There are many very serious scenerios occuring in this comedy, such as when Steven, the father of the family (played by Michael Gross, whom I best remember from his role in the Tremors series) has a heart attack in a three-part story arc called Heartstrings, or when the Keatons defend their new African-American neighbours after they become the target of racist actions committed by other people in their neighbourhood in a two-parter called All in the Neighbourhood.
The focus of the overlapping narrative is placed onto the exodus of Michael J Fox’s character Alex as he receives a lucrative job offer in New York city, a story that runs right to the finale of the show itself. Throughout all seven seasons we saw the comedic conflict between the fiercely Republican Alex and his former hippy parents and the show completes the arc by having Alex follow his capitalist minded ambitions to Wall Street, but not before reaffirming his loving connection to his entire family.

Presented in its original Fullscreen ratio. An acceptable visual presentation, albeit with that fuzzy 80s tone considering how it was not polished or updated much from the original video recording.

Presented in Stereo. The audio is not pristine but perfectly fine. There is nothing dynamic occurring in this typical studio-filmed sitcom presentation so Surround would probably be wasted anyhow.

Right to the end, the episodes are peppered with heart warming chuckles and charming banter between Alex, his sisters, and his parents.  It wasn’t a revolutionary sitcom, but definitely has some nice, character driven stories.