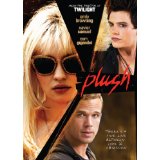 “Maybe this could be whatever happens on tour, stays on tour.”

Yeah, because that always ends so well; when are people going to learn that there’s no such thing as continuous casual-nobody-gets-hurt sex? Sooner or later (especially sooner), feelings develop on both sides, or on one side rather. In the case of one-sided feelings, Plush is the latest in films to show us what could possibly happen.

Plush is a rock band that skyrocketed to the top of the charts and has remained there since their debut. At the heart of the band’s success are the brother and sister as well as songwriting duo of Hayley and Jack (Emily Browning and Thomas Dekker); their shared efforts have been the driving force behind the group’s most successful songs, in their eyes one cannot do it without the other. Then Jack suffers a drug overdose, and suddenly Hayley is left alone in the world.

Unsure whether she can go on, Hayley takes some time off. It takes some time; however, eventually inspiration strikes and she begins writing again and before long, she has written her first album without her brother. The album becomes a tour, and then comes the part she dreads the most: finding her brother’s replacement. That replacement turns out to be Enzo (Xavier Samuel, Bait). A bit standoffish to him at first, after a potentially dangerous confrontation with a fan, Hayley eventually warms to him, and the two begin spending time together as friends. Lonely hours on tours and criticism from bloggers about the latest album, Hayley finds herself turning to Enzo for support and things become intimate. Afterwards (well, not immediately afterwards), Hayley becomes conflicted as her involvement with Enzo is a betrayal to her marriage to Carter (Cam Gigandet).

Over time, despite her initial attraction to him, Hayley begins to see a darker side to Enzo and tries to end things. She will come to learn that ending things will not be as easy as it was starting things.

This film hosts a bit of a Twilight reunion; In addition to being directed by the Catherine Hardwicke, the very first director for the Twilight series adaptations, it also includes two cast members from the series: Cam Gigandet and Xavier Samuel (it is also worth mentioning that lead actress Emily Browning also had a small part in Meyer’s adaptation The Host). Despite that, the film has a very interesting look to it. It appears to be very rooted in the rock and roll theme, from the looks of the characters to the music used. The film also has a very dark edge to it, which works well with its initial plot; even as the two characters begin their affair, we get glimpses of the foreshadowing of Enzo’s darker side, making the end result even more plausible.

The individual acting was all right; there wasn’t anything about their portrayals that was extraordinary. Everyone fit their roles just fine; however, when it came to the starting of the affair, I just felt that it came about too quickly and felt rushed. There was no real buildup, there was no hesitation on Browning’s character’s part; they essentially just launched right into it without a second thought; it made it difficult to empathize with the situation that the character found herself in, because during the times of bliss she never considered the consequences until it was far too late. I would have just liked to see more resistance from the beginning; I think that would have played better.

As far as how the rest of the story unfolded, it was pretty good. The pacing and its progression to the conclusion were fitting. There were a few twists towards the end, one that I felt played well with the overall story, and the other that the film could have done without in my opinion. The one that played well revealed just how twisted and dark Enzo was in his obsession; the other just appeared to be nothing more than a matter of convenience to help step up the film’s cliffhanger ending, but the film would have been the same without it if you ask me.

Jeremy Butler is a film school graduate of the International Academy of Design and Technology. He is been writing for Upcomingdiscs since 2012; however, movies have played a big part of his life for much longer. Favorite genres include horror, science fiction/fantasy, and comedy. Favorite movies are V for Vendetta, Boondocks Saints, Kiss Kiss Bang Bang, and The Godfather.
A Hijacking (Blu-ray) Shrek: The Musical (Blu-ray)