Posted in: Disc Reviews by David Annandale on March 17th, 2012 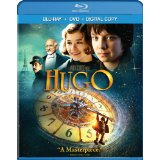 In the 1930’s, the orphaned Hugo Cabret (Asa Butterfield) lives in the access tunnels of the Gare Montparnasse in Paris, winding the clocks, making sure that no one knows his guardian uncle has long-since gone AWOL, and filching bits and pieces of mechanisms that will allow him, he hopes, to repair the automaton he keeps in his living quarters. This is his last connection to his deceased father, and his dream is that the repaired machine will grant him a message from the beyond.

But there are obstacles to his quest. Foremost is the tyrannical station inspector (Sacha Baron Cohen), who likes nothing better than rounding up street urchins and packing them off to the orphanage. Hugo also runs afoul of the bitter, disappointed old man (Ben Kingsley) whose toy store has been the source of much of his material. This encounter proves fateful for them both. The old man is none other than Georges Méliès, whose films are the ground zero of all fantasy in cinema, but who has since been forgotten by the industry he helped create. Hugo and Méliès’ granddaughter Isabelle (Chloe Moretz) become allies, determined to give Méliès back the sense of joy and wonder he once gave to so many.

The idea of Martin Scorsese directing a children’s film is, granted, a little counter-intuitive. But that is what he has done here, and the very particular kind of children’s movie he has made makes perfect sense. This is a love letter to the movies, and a heart-felt tribute to the man who was the first to see, in film, the possibility of making dreams come to life. Though this is a picture with an all-ages sensibility, and I can picture the younger crowd getting a kick out of Hugo’s madcap races through the train station, and the chemistry between Cohen and his demonic Doberman, the fact of the matter is that the children who will enjoy this the most, I think are the children who live inside adult film buffs.

I have to confess to a personal bias here. Georges Méliès has been a hero of mine since I was 10 years old, and this film felt like it had been crafted specifically for that younger self. How could my reaction not then be one of unqualified, giggling delight? I’m not even going to pretend to any kind of objective perspective on the film. Can’t be done. But I will say this all the same: the visuals are a feast, with Scorsese giving us the same kind of unrestrained phantasmagoria in the 21st Century that Méliès gave his viewers at the end of the 19th . Scorsese’s use of 3D is magisterial. It is not a gimmick here, but rather an integral part of the film’s artistic and thematic statements.

I’ll close this bit with an anecdote. Towards the end of the film, there is a montage of clips from Méliès films. One is from Le Mélomane (1903). In it, Méliès plays a fellow who repeatedly removes his own head, throwing his noggins up onto a giant stave in the sky, where they form musical notes. At the theatrical screening I attended, when this moment occurred, I head a woman gasp in delighted surprise. That a movie well over a hundred years old can still have its intended effect is a wonderful thing. I would rank that moment as probably the loveliest second I spent at the movies in 2011.

Lacking the equipment, I can’t speak to the 3D version, so the rating applies to the 2D one. However, the overall quality of the disc certainly bodes well for the former, and that would certainly be the ideal way of watching the film. When it comes to the 2D version, the image loses a little bit of its effect in the translation. The breathtaking opening, for example, is still breathtaking, but the full impact of being plunged into this fantastical, impossible, yet still recognizable Paris isn’t there. Similarly, the moment where the inspector’s face looms out over the audience is now (obviously) just a more and more extreme close-up, and isn’t nearly as funny. These losses cannot be helped, and are due to the fact that this is a film that really does use 3D well. That said, the 2D version is beautiful, with colours that are several orders beyond sumptuous. The blacks and flesh tones are both superb, and the resolution razor sharp without sacrificing any warmth. The AVC codec keeps things at a very impressive 30-35 Mbps, and the aspect ratio is the original 1.85:1 anamorphic widescreen.

While the video can’t match the theatrical experience except for the still-in-the-minority viewers who have the proper 3D equipment, the audio is pretty spectacular for anyone with a surround setup. From the opening seconds of the film, when the ticking of a watch travels from one speaker to another, building to the enveloping chuffing of a train, we are deep into the world of the film. The placement of the sound effects is superb, and the music is given a properly transporting mix. However, the dialogue is never smothered by all the fun sound design, and is always perfectly clear. A thoroughly engaging track.

Shoot the Moon: The Making of Hugo: (19:48) A fairly typical making-of piece.

The Cinemagician, Georges Méliès: (15:41) Considerably more interesting, this is a good introduction to the man and his achievements.

Big Effects, Small Scale: (5:55) This looks at one specific moment – the train crash that recreates the famous picture of the locomotive dangling into the street.

The Mechanical Man at the Heart of Hugo: (12:45) Pretty fascinating stuff here, giving a history of automata, and featuring all sorts of neat (and vaguely disturbing) creations.

Sacha Baron Cohen: Role of a Lifetime: (3:33) As one might expect, this piece is just a bit of silliness, riffing on the idea that the comic was a lunatic diva who would (in his own words) refuse to take direction from anyone under six feet.

A delightful effort from start to finish, so different in tone from so much of of Scorsese’s work, but no different in its exuberant love of the medium. Watching it in 3D is ideal, but watching it at all is essential.