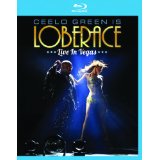 For the better part of the last 20 years, CeeLo Green has ferociously defied musical expectations by zigging when you expect him to zag. (If you thought the former frontman of hip-hop collective Goodie Mob would eventually become one of the judges on TV’s #1 singing competition, then go buy a lotto ticket immediately because you have a gift.) I happened to be in Las Vegas earlier this year when I saw a poster for CeeLo’s Sin City Loberace show. And for the first time I can remember in regards to CeeLoo’s career, I thought, “Hey that actually makes sense.”

The 78-minute concert features music from CeeLo’s Goodie Mob days — the group released its first album in 1995 — as well as a few Gnarls Barkley tracks (the result of CeeLo’s fruitful collaboration with producer Danger Mouse) and a certain jauntily profane solo smash. (It’s billed as “Forget You” in the Blu-ray case’s setlist, but CeeLo allows the eager crowd to yell out the real title.) Throughout the show, CeeLo encourages his audience to leave reality behind and step into his world, which is a scary place to be when you’re talking about a guy who is basically a human Muppet.

After a bizarre, vaguely sexual pre-taped intro, CeeLo opens the show with the appropriately titled, “Bright Lights, Bigger City.” As he emerges from the bowels of the stage, he’s flanked by 10 scantily-clad backup dancers (Vegas baby!), who actually end up doing most of the heavy lifting from a performance standpoint. As a red-blooded male, I didn’t at all mind the scorching solo dancer featured in “Hot Thang”, or the fetish buffet known as “Sophisticated Bitch”, or the fact that the “Closet Freak” part of the “Freak Medley” almost made my TV spontaneously combust. But when I sit down to watch a CeeLo Green concert film, I have the crazy idea that CeeLo Green should indisputably be the star of the show.

The truth is this relatively brief extravaganza can’t help but feel like it’s stretched too thin. A couple of times, CeeLo tells the audience impossibly corny jokes before launching into a song. The setlist also inexplicably features a Boy George medley that might’ve been more interesting if we got to hear CeeLo sing the covers. Instead, we get an extremely capable, but anonymous actor pretending to be Boy George while Cee-Lo changes costumes. The whole ordeal is somewhat salvaged during Cee-Lo’s soliloquy about breaking away from reality, when he astutely says, “I know some of you are wondering, ‘What the f— does Boy George have to do with anything?’” (That was followed by me nodding vigorously.)

That being said, Loberace is overall a strong showcase for CeeLo’s many costumes talents. His soulful wail is best appreciated in slow jams like “Whoever Loves Me.” CeeLo is also a successful producer and writer, so we get to hear his take on The Pussycat Dolls smash “Don’t Cha”, which he penned. He wisely closes the show with a Goodie Mob reunion/medley, Gnarls Barkley hit “Crazy” (my favorite thing he’s ever done), and, of course, “F— You.” Again, the audience did the heavy lifting on this last one, but they didn’t seem to mind. Until these last three tracks, the crowd seemed generally subdued; I imagine it takes a while to get acclimated to the atmosphere in CeeLo’s world.

6. Boy George Medley: Do You Really Want to Hurt Me/It’s a Miracle/Karma Chameleon

Loberace: Live in Vegas is presented in an aspect ratio of 1.78:1. The 1080i image is arrived at with an AVC MPEG-4 codec at an average of 32 mbps. From the opening moments, it’s obvious this isn’t going to be your typical concert film with a camera pointed at the middle of the stage to capture a stationary singer. Loberace opens with a James Bond-esque video that is noticeably softer than the performance footage.

Speaking of the performance footage, this is a high-quality HD presentation that captures every ounce of sweat on CeeLo’s, um, everywhere and every curve of his backup dancers. (Not that they’re leaving much to the imagination.) There’s a bit of noise during some darker bits involving the crowd, but you won’t be shocked to learn that bright, garish colors rule the day. The biggest letdown is that CeeLo didn’t revisit his ostentatious Elton John Grammys get-up. What better place to wear that — or something like it — than Vegas?

The DTS-HD Master Audio 5.1 track is pretty solid, but not quite up to the excellent standard I’ve come to expect from these Eagle Rock discs. I realize I may be in the minority on this, but I really like these concert audio tracks to replicate (as close as possible) the experience of listening to a show live. That means I’m actually willing to sacrifice a bit of vocal clarity in exchange for being enveloped in sound. Unfortunately, this track just doesn’t have a very strong sense of immersion. The good news is the vocals — dominating the front speakers, and echoing a bit out of the rears — are as clear as you could ever want. You also have the option of listening to the show in LPCM Stereo.

Interview with CeeLo Green: (7:05) This interview gives CeeLo a chance to reinforce his whimsical, stranger-is-better mission. He also gives a shout-out to his eclectic musical influences (“Billy Idol to Billy Joel”), and marvels at his “older white woman” fan base. (They were definitely the ones grooving the hardest toward the end of Loberace.) Presented in HD.

If you only him from his stint on “The Voice”, Loberace serves as an excellent crash course/entry point into Planet CeeLo.

The risks he takes don’t always pan out, but I have a strong feeling he’s not going to tone down his act anytime soon. After all, “spontaneity is the spice of life.”