Posted in: Disc Reviews by Gino Sassani on November 14th, 2013 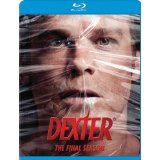 It’s been six months since last we visited with Dexter (Hall) and his pals. Deb (Carpenter) had just shot and killed Lt. LaGuerta (Velez), and the blame went to another killer. It was LaGuerta or Dexter, and she made her choice. Now she’s suffering some post-traumatic consequences for her actions. She’s left the force, and no one has heard from her in weeks. She’s hanging out with lowlifes doing drugs and playing undercover cop as a private investigator with Jacob Elway, played by Sean Patrick Flanery. Dexter is trying to track her down and possibly save her life from a hitman. Needless to say, it’s going to be a long road for the siblings.

Enter Dr. Evelyn Vogel, played by Charlotte Rampling. She’s been called in to help catch this season’s serial killer guest star, The Brain Surgeon. He cuts open his victim’s heads and uses a melon baller to scoop out a section. We soon discover that Vogel has more than a passing interest in the killer. He’s been leaving those missing brain pieces on her doorstep. She seeks Dexter’s help and has a few surprises for him. She knew Harry, and she knows what he is. Turns out she helped create Harry’s Code. Now he needs to find The Brain Surgeon before he takes out Vogel. Along the way she convinces Dexter to take on a “student”. Much of the season has Dexter going from being disappointed enough to kill the kid to proud enough of him to help him out.

The most promising part of the season comes when Hannah (Strahovski) arrives back in Miami and into Dexter’s life once again. Her entrance never quite lives up to the expectations. Hannah is a bit needy suddenly, and she has absolutely lost that killer edge that made her such a compelling character and perfect match for Dexter. Still, the writers try to put them together with ongoing hopes of a perfect family that anyone who’s seen an episode previously knows is never going to happen. I love Yvonne Strahovski, have since her days on Chuck, but she’s not quite the powerful character she once was. Can’t blame the actress. This is all in the writing. What’s ironic is they changed the dynamic of their relationship to build a forced chemistry when there already was such powerful chemistry before. It’s gone this season.

Unfortunately, this has been a season for disappointment for fans. It’s gotten a lot of negative buzz. Some of it isn’t earned. A lot of it is. The season dangles characters and storylines that never get paid off. Vince Masuka (Lee) gets the most encouraging character development arc he could have. A hot chick who’s looking for him turns out to be his daughter. The writers dangle potential payoff here and end up taking the arc nowhere but a few good scenes that don’t ultimately move the story along.

The idea of an apprentice for Dexter isn’t exactly new. He’s had hopeful partners in the past, but this had the potential to be a game-changer for Dexter and the series. It was the first time he really had a complete student to work with and not just a mess he happens to relate to. For a while they play this out perfectly with Dexter’s emotions running back and forth. But the arc is eventually used as nothing more than a throwaway. It’s a perfect example that this show wasn’t finished. This particular arc should have carried over at least until another season. The end appears forced on us, and I can’t quite figure out why. The ratings were good, and I hadn’t heard Hall complaining about moving on. Never before was an ending forced upon us so unnecessarily.

The Vogel character was another place where potential was never fully developed. What we get here is, in fact, the cream of the season, but it needed to play out longer. There were questions I wanted answered. They seemed to hint that Vogel might have had more to do with Harry’s suicide than we know, but it was never explored. The most unrealistic part is that Dexter never even thought about the connection. True or not, our Dexter absolutely would have explored that idea to some degree.

The best development comes to the character of Angel Batista, played brilliantly by David Zayas. He’s taken over the squad since Deb left, and he gets to play a wide variety of situations and emotions here. He’s dealing with his sister dating Joey Quinn (Harrington) which unfortunately leads to another thread left dangling. He has to pick a sergeant, and it’s between Quinn another woman who is more qualified. Once the choice is made, however, the woman seems to disappear from the series. He’s dealing with being a leader and seeing Deb’s life going terribly wrong. There’s a lot of untapped potential here. There’s talk of a spinoff. I hope he’s a strong part of any that come.

Of course, you want to complete your series, and that’s exactly what Showtime is counting on here. For many of those eight years, Dexter was pretty sweet television. The presentation is as good as ever, so what the heck? If you’re not a completeist, rental is a rather strong option here, to be sure.

The Dexter releases have always disappointed in the bonus feature department. We get the usual bonus episodes of another Showtime series, Ray Donovan. This time we do get series-related features but they are 1-3 minute promos that likely aired on Showtime. They talk in future tense so are mostly teasers for the “upcoming” season. Each is pretty much episode specific.

Finally, we need to address the end of the series. Clyde Phillips was the original showrunner. He has since left to run things over at Nurse Jackie. He has recently revealed what he had planned for the final episode. The series would end with Dexter opening his eyes. We’re meant to suspect it was all a dream, that is until we find out where Dexter is. He’s on the execution table at Florida State Prison. As he’s being killed it was his life flashing before his eyes. I would have loved to see that ending. I’ll have to settle for what we got. Without giving too much away, the ending is hard to believe even in the world of Dexter. It’s contrived, unrealistic and utterly disappointing. The end is filled with crappy special effects and a coda that will leave you with only one question. “What the F@#$?”

Gino Sassani is a member of the Southeastern Film Critic's Association (SEFCA). He is a film and television critic based in Tampa, Florida. He's also the Senior Editor here at Upcomingdiscs. Gino started reviewing films in the early 1990's as a segment of his local television show Focus. He's an award-winning recording artist for Omega Records. Gino is currently working on his 8th album Merchants & Mercenaries. Gino took over Upcomingdiscs Dec 1, 2008. He works out of a home theater he calls The Reel World. Favorite films: The Godfather, The Godfather Part II, The Body Snatcher (Val Lewton film with Karloff and Lugosi, not the pod people film), Unforgiven, Gladiator, The Lion King, Jaws, Son Of Frankenstein, The Good, The Bad And The Ugly, and Monsters, Inc.
Man of Steel (Blu-ray) Dallas Buyers Club