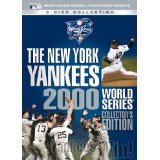 On the Third Day Of Christmas A&E  gives to you:

Christmas has just come and gone but baseball Spring training is already just around the corner. If you’re a New York Yankee fan, you’re going to love this prize. A&E has given us their 5-disc collection The New York Yankees 2000 World Series Collector’s Edition. If you think that was a mouthful wait until you see what’s in this collection. You get every game from the 2000 World Series and a ton more. Radio calls are included for each game. You can listen to the television or radio announcers. Thanks to A&E and Major League Baseball Productions.

Gino Sassani is a member of the Southeastern Film Critic's Association (SEFCA). He is a film and television critic based in Tampa, Florida. He's also the Senior Editor here at Upcomingdiscs. Gino started reviewing films in the early 1990's as a segment of his local television show Focus. He's an award-winning recording artist for Omega Records. Gino is currently working on his 8th album Merchants & Mercenaries. Gino took over Upcomingdiscs Dec 1, 2008. He works out of a home theater he calls The Reel World. Favorite films: The Godfather, The Godfather Part II, The Body Snatcher (Val Lewton film with Karloff and Lugosi, not the pod people film), Unforgiven, Gladiator, The Lion King, Jaws, Son Of Frankenstein, The Good, The Bad And The Ugly, and Monsters, Inc.
12 Days Of Christmas Giveaways – Day 2: Naked City: 20 Star-Filled Episodes From Image Entertainment 12 Days Of Christmas Giveaways – Day 4: Escape From Planet Earth 3D Blu-ray From Anchor Bay